If you’re neither a foodie nor a social media watcher, the fact that charcuterie boards have been a thing in recent years might be news to you. The wooden boards are works of food art, heaped with cured meat slices, cheese cubes and mounds of nuts and dried fruit, strewn about just so, to create a riot of color and mouth watering (nonkosher) goodness.

Their popularity is one reason South Peninsula Hebrew Day School parent Michal Feld proposed the idea for a virtual charcuterie board contest at the school as a way to create some fun for the kids.

Feld, who lives in Sunnyvale, has one of her three children at SPHDS. Her husband works at Google, where they had a similar contest, and she saw how much her kids enjoyed dreaming up and executing their entry.

“My family loved it so much,” she said. “The one at SPHDS became much bigger than I imagined.”

The students were split into several divisions, and the rules dictated that all ingredients used had to be kosher.

Yours truly was asked to be a judge, along with some other local food personalities connected to the school, including Israeli American cookbook author Adeena Sussman, who grew up in Palo Alto and is an SPHDS alumni, Spencer Brodie from Neshama Foods and Orit Hendler Leib from Deja Vu.

Judging was hard. It was clear that some of the children — especially the younger ones — did not model their creations after actual charcuterie boards and instead viewed the contest as more of an opportunity to play with their food and create food sculptures, but none of that mattered. Some of the more interesting boards had Israeli food themes (the school has a large number of Israeli families), Hanukkah themes and, fittingly, at least one coronavirus theme.

In the older kids’ division, my fellow judges and I agreed that three boards were visually ahead of the rest (judged solely by photographs on our computers and not by taste). We were asked to judge in two categories: best overall and most creative.

I’ll be honest, while Lindenbaum’s entry looked nothing like any charcuterie board I’ve ever seen, it’s hard to compete with Baby Yoda. Mazel tov to the winners!

As food insecurity has grown for more families due to the pandemic, Cheetah, the San Francisco-based grocery delivery service (whose Israeli CEO, Na’ama Moran, we profiled months ago), has joined the community fridge movement, helping to stock refrigerators with free food for the taking for anyone who needs it.

These fridges have popped up around the Bay Area (and across the country), with a number of businesses and individuals helping to keep them stocked. Cheetah donates excess food that’s close to its expiration date to three locations, San Jose, Oakland and Berkeley. Find out locations and how to donate here. 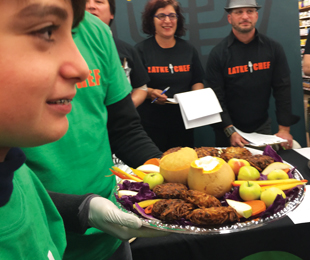