Hanukkah recalls a time more than 2,000 years ago when the Jews living under Greek rule were persecuted. The Greeks forcibly attempted to Hellenize the Jewish people. They outlawed the practice of Judaism and killed anyone who challenged their authority. A statue of the Greek god Zeus was erected in the Holy Temple in Jerusalem.

Jews rose in revolt and won a most remarkable and improbable military victory. Fresh off the battlefield, the Maccabees came to rededicate the Temple only to find a single cruse of oil still intact. With it, they relit the great menorah. The oil was sufficient to burn for only one day. Miraculously, it burned for eight days, which is why we light our menorahs, wherever we are, for eight days.

But if we think about it, the miracle was really only seven days. The cruse contained enough oil for the first day. What was the miracle of the first day? We should celebrate seven miraculous days of Hanukkah — not eight.

If we celebrated only seven days of Hanukkah, we would be bearing witness only to God’s miracle — the fact that the oil lasted an impossibly long time. By celebrating eight days, we acknowledge that critical first day — that day in which the Maccabees took the courageous first step of lighting the menorah. We remember their initiative, and ours.

But it isn’t easy to have that courage, then or now. For many years, in the Soviet Union, the crimes of Stalin were not mentioned. This taboo was officially broken in 1956 by Nikita Khrushchev, then first secretary of the Communist Party. In a secret seven-hour speech in the Politburo, Khrushchev chronicled the crimes of Stalin. He depicted Stalin as a monster who had launched terror campaigns against every citizen of Russia, who at the height of his campaign was executing 40,000 people a month.

In the midst of his speech, a voice yelled out from the back of the chamber: “Nikita Khrushchev, you were one of Stalin’s top aides, where were you when all this was going on?”

The crowd grew silent, and Khrushchev screamed, “Who asked that question? Stand up.”

A pause followed. Khrushchev repeated his question, but was once again met with silence. He then replied, “That is where I was” — cowering in silence.

One of the saddest facts of the human condition is that most people are silent when they should speak out. Because of the lack of courage, evil triumphs again and again through history. Injustice thrives in silence. Most Russians in the 1920s and 1930s and 1940s were not evil like Stalin, just like most Germans in the 1930s and 1940s were not evil like Hitler. However, you don’t need a great number of truly evil people to carry out massive evil. You only need a shortage of courageous and good people. Complacency does the rest.

And there is a great courage shortage. It is the most uncommon of all virtues. There are far more kind and honest and talented and intelligent people than there are courageous people.

This is why the antisemitic boycott, divestment and sanctions movement against Israel on college campuses is successful. Many professors have knowledge but not moral courage. They desire to be liked and popular and are afraid to stand up for what is morally right. They don’t want to be shunned in the faculty lounge or at conferences. As a result, college campuses throughout the world are now breeding beds of antisemitism. Sadly, in the fight of good against evil, all the great virtues like wisdom and knowledge, humanity, justice and love amount to little when not accompanied by courage. Virtue without courage is like a night without stars. College campuses have gone dark.

But the Hanukkah lights remind us that evil, injustice, cruelty or moral complacency do not have the final word. Each one of us in our way can courageously kindle a flame of goodness that brightens the world around us. We can have the courage that makes all the other virtues shine bright.

“A little light,” said the Hasidic masters, “drives away much darkness.” And when your light and my light is joined to every other light, the world is altered. Distinguished anthropologist Margaret Mead once said, “Never doubt that a small group of thoughtful, committed citizens can change the world. Indeed, it is the only thing that ever has.” The Maccabees did then. So, today, can we. 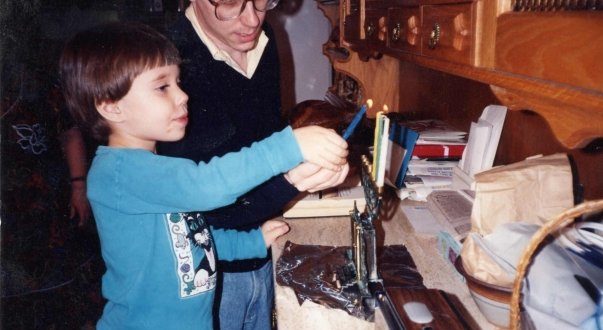