I even wrote and performed “Jew in the White House” to celebrate. Check it out at tinyurl.com/jew-whitehouse.

Surprisingly, the video sparked a stream of hate, with fellow Jews calling me “a stupid cow” or “psycho” for deigning to call Emhoff a Jew (his Jewish mother be damned), considering that he does not follow their brand of Jewish practice (apparently Ashkenazi ultra-Orthodox).

“I advise you to pick up a [T]anakh,” one person advised me, not bothering to ascertain I had grown up Orthodox — so I picked it up plenty of times, thank you very much.

Then the Forward ran a Jan. 22 article headlined “Ella Emhoff isn’t Jewish (and she doesn’t want to talk about it)” after her social media manager released a statement: Ella, Doug’s daughter, “is not Jewish.”

The writer focused mainly on religious practice, but I wanted to know more. Does Ella perceive Jews as being a religious group only? If so, why? What experiences led to that perception?

Does she recognize Jews as being an ethnic group, a people, a tribe, whatever? Does she identify on that front? Is her lack of identification rooted exclusively in the fact she is not an adherent of Jewish theology? Does it come from somewhere else — internalized racism, maybe?

This especially happens in Orthodox circles, and it has sent me running from any number of synagogues and community organizations over the years. In one incident, following a particularly strident interrogation, it even sent me running to the bathroom of a synagogue, in tears.

Let’s start with the JewFro. The Jewish people hail from the Middle East, and therefore historically share the physiological traits of others in the Mediterranean region. Through mixing with Europeans over the generations, the skin and eye color of Ashkenazim got lighter, but other traits remained, such as the JewFro and so-called “Jewish nose” (in actuality shared by Arabs, Italians, etc.).

A nose job has been a rite of passage for Ashkenazi girls for years. Similarly, African American women, including those with lighter skin due to generations of ethnic blending, sometimes alter their appearance, most commonly by straightening their hair, thereby erasing a physical mark of their African roots.

While these alterations might be matters of personal preference, that preference might be the result of internalized racism — like when I kept buying blonde Barbie dolls as a kid because they were “prettier” than the darker ones.

Now let’s talk identity. A mixed-race Black woman may personally identify as white; perhaps she grew up in a white neighborhood, never knowing her Black side. And yet, she may boast African features. So can she outright dismiss that side of her? Who gets to decide that?

As a corollary, can Black people (including Black Jews) be proud of her, as one of theirs, if she rises to a position of power, leadership and visibility? White supremacists certainly wouldn’t let her forget her Black side.

A friend of mine notes, if you have a drop of Black in you, and the rest of you is white, you’re considered by others to be Black. But if you’re Black with a drop of white in you, you’re still considered to be Black.

Similarly, Nazis will unequivocally define as a Jew anyone with the faintest shade of Jewish lineage. In fact, people responding to “Jew in the White House” pointed out that while ultra-Orthodox Jews might not consider Emhoff a Jew, Nazis would. (But wait. Does that mean haters, through targeting whomever they hate, are the definers of identity?)

Who gets to define us as Jews is complicated by mass ignorance and confusion about who the heck we are to begin with. I think of us a nation in a knapsack, hailing back to the motherland of Israel or,  more precisely, the southern Kingdom of Yehuda (Judah), from where we get our name.

Through our history, we have consolidated the elements of our national identity (land, culture, language, temple, ritual, etc.) and made it mobile, adaptable — heck, virtual, if you will — so that it survived, and thrived, through millennia of persecution and exile.

We fled from one place to another, blending with locals in new lands, adapting our traditions, integrating local customs with ours and regulating religious practice according to what was safe (or fashionable). Thus, we shape-shifted our individual and collective identity, and today, we are an international, multiracial, multiethnic people spanning from atheists to the devoutly religious.

Regardless of how Ella identifies herself — or how anyone else identifies her — I’m grateful for her visibility and the complexity of her identity, if only to catalyze public discourse about what it means to be a Jew. And who gets to decide that.

Come to think of it, given the onslaught of additional questions that have arisen from the singular question of her identity, one might say that Ella is, in this way, very Jewish. 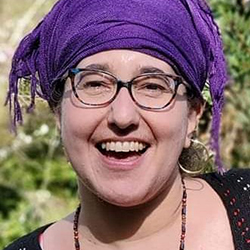 Loolwa Khazzoom is a former resident of San Francisco and Berkeley now living in Seattle. She’s a writer, educator and the frontwoman for Iraqis in Pajamas, which blends Iraqi Jewish prayer with alternative rock. “Jew in the White House” is now a global recording project seeking submissions online.