Before I had even managed to settle down for my first Zoom meeting on Monday morning, I had already received several messages from friends and colleagues alerting me to the clip of Effie Hertzke, an 81-year-old woman being interviewed on Israeli television after receiving her Covid-19 vaccine.

Bedecked with large dangling earrings, a shirt with “BADGIRLS” emblazoned across the front, and a full face of makeup, Hertzke chatted — in a mixture of Hebrew and English — with seasoned journalist Rafi Reshef while walking on the treadmill at her local gym in Ramat Gan.

Hertzke is a sassy and intrepid great-grandmother, undeterred from speaking her mind and sharing her racy thoughts. While showing off her biceps, describing how she’d like to meet a young man at the gym, and flirts with Reshef by asking if he is married. Hertzke captures the juxtaposition of the endearing and yet also audacious bubbe — a recognizable figure of familiarity in these unpredictable times.

Watching this clip from my home in New Jersey, where gym attendance is severely constrained because of the pandemic, I could appreciate Hertzke’s excitement about being back on the treadmill. But as a sociolinguist who studies Americans and their use of modern Hebrew, I was even more struck by the characteristics of the conversation between Hertzke and Reshef, as well as by the outpouring of attention in the Jewish press and in social media that her discourse attracted.

When Reshef asks “Ve’ech hakosher?” (And what kind of shape are you in?), and Hertzke responds “Oh my god! Ata rotse lirot et ha muscles sheli?” (Do you want to see my muscles), she is engaged in what linguists call translanguaging.

Coming out of bilingual education scholarship, translanguaging describes the ways that bilinguals, multilinguals and indeed all users of language use all available linguistic resources to communicate effectively with others. Instead of viewing bilingualism as strictly separated languages in the individual’s mind, translanguaging approaches language in a more dynamic way, seeing it as the natural and authentic way in which people move fluidly between languages — sometimes, as with Hertzke, within the same sentence.

What makes Hertzke’s translanguaging particularly noteworthy is that she clearly has strong Hebrew skills. She effortlessly recalls, “Ani avadti ad gil shmonim bishvil maskoret (I worked until the age of 80 for a salary) and then my children said, ‘Ma, maspeek kvar’” (enough already).

Hertzke’s translanguaging does not cause a communicative breakdown. In fact, it’s what allows her feisty personality to shine. The banter between the two is seamless, and Reshef responds to Hertzke’s utterances without missing a beat, showing any signs of misunderstanding or feeling the need to translate for his audience.

Given the naturalness and the success of the interaction, I was not surprised by the outpouring of affection that Hertzke’s language evoked from my American Jewish friends, many of whom themselves engaged in translanguage creativity in their responses. One of my colleagues immediately posted on Facebook: “If you speak a bissel (Yiddish: a bit) of Hebrew, you will laugh out loud,” while another quipped: “Wow! Ain li milim! (I have no words). ROTRZMTO. rolling on the ritzpah zchokim my tachat off (rolling on the floor and laughing my tush off).

I was surprised, however, by the number of comments people made about Hertzke’s American accent. One poster commented: “I’ve never heard anyone that fluent and that strong of an American accent before,” while another wrote “OMG. Is that what I sound like to others when I speak Hebrew? But you have to give her credit. At least she isn’t putting on that fake accent so many Americans do when they speak.”

Reading these posts, I could not help recalling another Israeli American octogenarian who was also disparagingly marked by her accent: Former Israeli Prime Minister Golda Meir, who was belittled for her lack of native-like Hebrew pronunciation, intonation, stress, tempo and other prosodic features.

Are American Israelis still marked by how they sound? In her best-selling book, “English with an Accent,” linguist Rosina Lippi Green points out that while pronunciation can importantly indicate geographic or cultural variation, the idea of an accent can also give power to forms of discrimination and unequal power relations by reinforcing standard language ideologies, or what society believes is the correct and valued way of speaking. In other words, societies assume there is one way of speaking correctly, so when people hear an accent, they not only hear a different form of pronunciation, but may also make judgments about the speaker’s worth and place in society.

Contemporary Israeli society is highly multilingual and made up of immigrants and foreign workers from all over the world, yet the strong responses to Hertzke’s iconic accent strikes me as evidence that there are nevertheless common perceptions that Hebrew should “really” sound a certain way, and that American-accented Hebrew isn’t it.

My hope, however, is that Hertzke is in on the joke, and knows intuitively that her way of speaking Hebrew is Hebrew, without the need for any modifier. Hertzke owns her multilingualism, and her translanguaging celebrates the idiosyncratic beauty of both of her languages, as well as her national identities. Ownership of who we are and how we put it out into the world — now that is a linguistic achievement we should all be proud of. 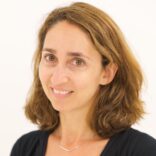 Sharon Avni is a professor of Linguistics and Academic Literacy at CUNY. She is the co-author of "Hebrew Infusion: Language and Community at American Jewish Summer Camps," which won the 2020 National Jewish Book Award in education and Jewish identity.