Israel said it sent ground troops into Gaza. It may have been a trick.

According to at least two seasoned analysts in Israel, the reports were part of a misdirection by Israel to lure Hamas forces into defensive positions that Israel hoped would be easier to identify and target.

The fighting continued into Friday, with Hamas, the militant group that controls the Gaza Strip, as well as Islamic Jihad militants, sending volleys of rockets into Israel. Israel has bombed Gaza heavily, including several strikes that Israel says have killed Hamas commanders.

Hamas officials told the Ma’an news agency that Israeli unleashed “air and artillery strikes” early on Friday that brought up the number of casualties in the Gaza Strip to 119. It had been 83 on Thursday morning. Nine Israelis have died, including two women, 87 and 50, who were injured while running for cover.

Palestinians also clashed violently with Israeli forces near the West Bank city of Jenin, where Israeli soldiers killed a Palestinian. In Jordan, hundreds of protesters rushed toward the Israeli border, overwhelming a police post along the way.

The conflagration has triggered clashes between Arabs and Jews in Israel, leading to dozens of arrests. There have been widespread violent protests by Arab citizens of Israel that included dozens of assaults on Jews and the torching of a synagogue in Lod and another synagogue in Jaffa, both cities with mixed populations. Several assaults by Jews on Arabs also occurred, including in Bat Yam on Wednesday, where a crowd of protesters beat an Arab man, leading to his hospitalization with serious injuries.

Israel has deployed 16 companies of Border Police in Lod, where a curfew was declared.

In the alleged military misdirection on the Gaza border, tanks revved their engines as they approached the border fence at around midnight.

The spokesperson’s unit  for the Israel Defense Forces on Twitter wrote: “IDF air and ground troops are currently attacking in the Gaza Strip,” prompting many media, including the New York Times, to issue reports that implied that a ground offensive had begun.

IDF air and ground troops are currently attacking in the Gaza Strip.

But the Israel Defense Forces later “clarified that no Israeli troops were actually in Gaza despite earlier reports to the contrary,” the Times reported. “Instead, the army had amassed troops along the Gazan border and was shelling the territory from Israel.”

An Israeli military spokesman, Lt. Col. Jonathan Conricus, earlier had confirmed to the Times that “There are ground troops attacking in Gaza, together with air forces as well.”

Ron Ben-Yishai, a senior military correspondent for the Israeli daily Yedioth Aharonot, is among multiple seasoned observers who believe the IDF had been deliberately unclear about this in a plan that used the media and other means to get Hamas fighters to reveal their positions and invite precision strikes, he wrote.

Guy Bechor, a conservative commentator on the Middle East and a former lecturer at the Herzliya Interdisciplinary Center, shared Ben-Yishai’s interpretation, calling the IDF move a “smart play of misdirection using the media.”

Some tanks deliberately passed briefly under the perimeter fence of Israeli towns near the border to reveal themselves to Hamas lookouts while moving westward toward the fence, but stopped just short of it, Ben-Yishai reported.

Palestinian militants ”came out of concealed positions to engage the approaching vehicles. Field intelligence units, anti-tank crews… and mortar teams,” Ben-Yishai wrote. The Israel Air Force carried out attacks against at least 150 targets in the two hours following the tanks’ movement, including on Hamas’ tunnel network, according to Ben-Yishai’s report.

As the fighting has continued, Israel has maintained a relatively high level of support from the United States and Europe.

“One of the things I’ve seen thus far is that there has not been a significant overreaction” by Israel, President Joe Biden said Thursday at a White House press conference where he was asked whether Israeli Prime Minister Benjamin Netanyahu was doing enough to prevent an escalation. “The question is how they get to a point where there is a significant reduction in the attacks, particularly the rocket attacks that are indiscriminately fired into population centers.”

In Austria, Chancellor Sebastian Kurz on Twitter wrote that he had the Israeli flag raised on the roof of the Federal Chancellery on Friday as a “sign of solidarity” and added, “we stand by Israel’s side.”

Israel also received support from the governments of Czechia, Hungary and Germany.

The United Kingdom condemned Hamas and urged de-escalation on both sides of the conflict. French President Emmanuel Macron on Friday tweeted in Hebrew and Arabic: “The vortex of violence must end in the Middle East. I firmly call for a ceasefire and dialog. I call for calm and peace.”

The fighting began on Sunday, when Hamas began firing rockets into Israel in what the terrorist organization said was a response to the eviction of Palestinians from homes in eastern Jerusalem that an Israeli court ruled they had been occupying illegally. The case has sparked mass protests among Palestinians in eastern Jerusalem, and is now pending before Israel’s Supreme Court. In recent weeks, Jerusalem has seen widespread Palestinian protests in which hundreds of protesters and dozens of police officers were injured. 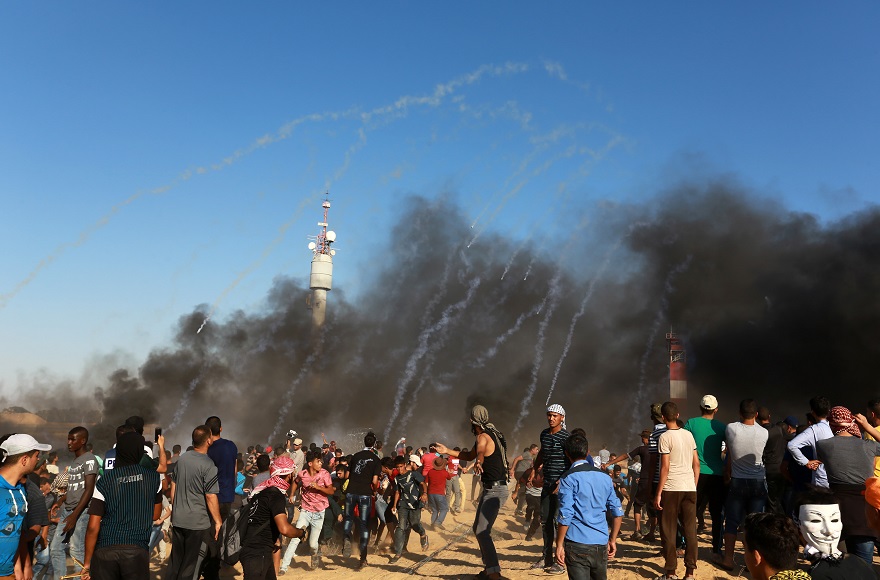 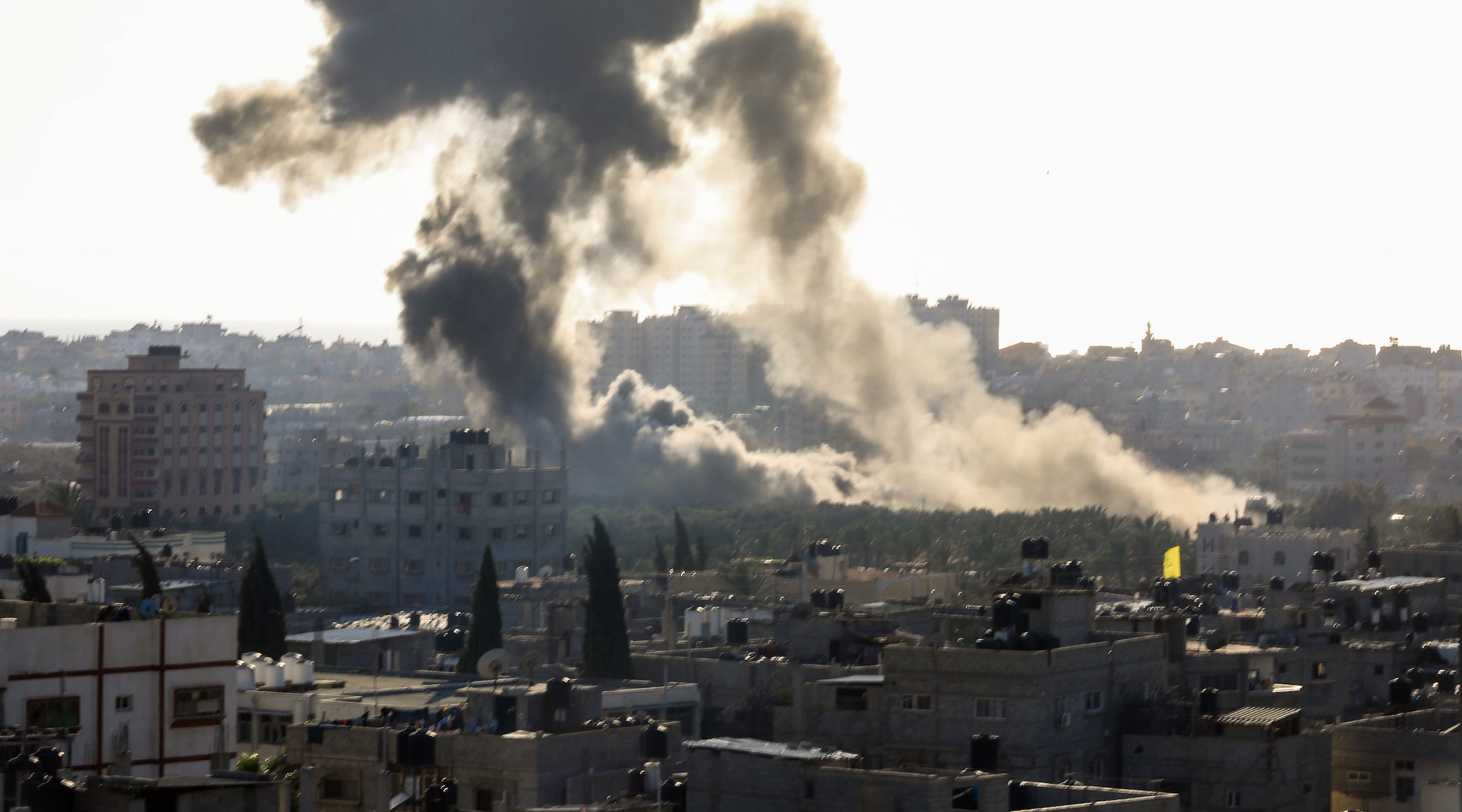 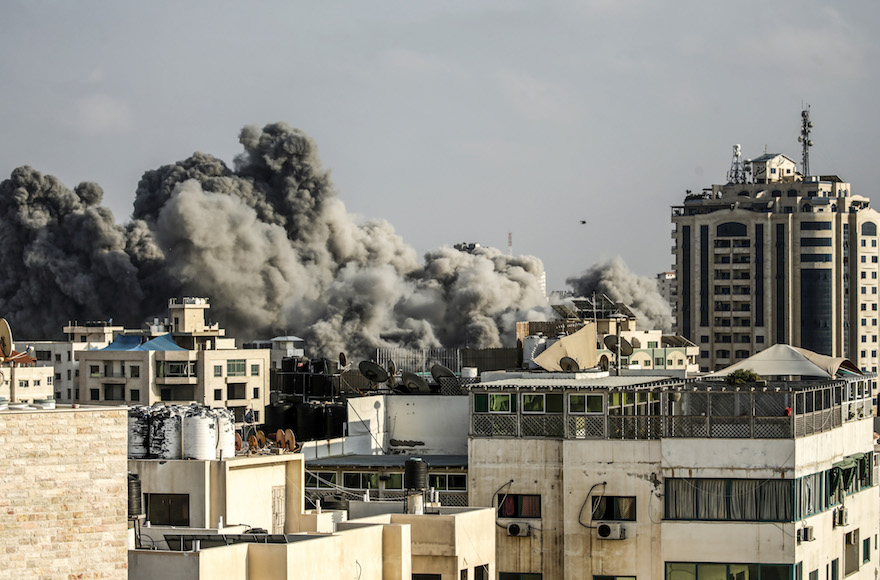