Amid a surge in hate crimes, prominent European Jews worry the war against antisemitism has been lost

In Germany, a man wearing a kippah was beaten on the street. In Austria, a student was harassed on the train for reading a book mentioning Jews in the title.

In London, a nurse said she was threatened at her hospital for wearing a Star of David necklace. And in Belgium, an Orthodox Jewish woman was told “Get away, dirty Jewess” by a man with whom she tried to share a park bench.

The full dimensions of Europe’s current surge in antisemitic activity are not yet clear, but by some measures, including those by the British Jewish community, the extent is unprecedented. Meanwhile, the range and density of incidents are unusual.

Antisemitic incidents were already rising in Europe before the 11-day conflict between Israel and Hamas in Gaza that ended with more than 230 Palestinian and 12 Israeli fatalities. With the start of the hostilities, Europeans began bracing for antisemitic activity that tends to accompany Middle East tensions. It’s known on the continent as “the import of the Israeli-Palestinian conflict.”

That dynamic was prominently on display during an escalation in 2014. But this time, some prominent Jewish community leaders and longtime fighters against antisemitism are issuing unusually dour warnings that the battle may be lost.

In light of dozens of incidents in Belgium alone in recent weeks, Joel Rubinfeld, the president of the Belgian League Against Antisemitism, wrote that he doubts whether he will be able to continue living in the country with his wife and two children.

“I believed I could. Now I doubt I can,” Rubinfeld, a former leader of the CCOJB, the umbrella group of French-speaking Belgian Jews, wrote in an op-ed published Saturday in the Le Vif weekly.

Brigitte Wielheesen, a well-known journalist and counterterrorism expert from the Netherlands, wrote Thursday in an op-ed for the news site Jonet that after years of battling antisemitism, she has concluded that the activity has become useless.

“The fight against this sickness has become hopeless,” wrote Wielheesen, a former secretary of the Interprovincial Rabbinate of the Netherlands. “If Jews are Europe’s canary in the coal mine,” she said, then “that bird is no longer alive.”

Dutch Chief Rabbi Binyomin Jacobs, who for years has recommended local Jews immigrate to Israel, partly due to antisemitism, said during a lecture in the city of Nijmegen that he and his wife would leave if not for their duties.

“It made us think of a captain duty-bound to a sinking ship,” one listener described it in a letter he sent to Jacobs following the lecture, Jacobs wrote on his blog.

The Israeli-Palestinian flareup came shortly after Jews in France expressed deep concerns over their future in the country in the wake of a final court ruling in the Sarah Halimi case. The nation’s highest court upheld rulings that the Muslim man who killed the Jewish physician and educator while shouting about Allah and calling Halimi a demon was too high on marijuana to be criminally responsible for his actions.

Not all communal leaders are so deeply pessimistic.

In Britain, Jews are shaken by a flurry of antisemitic incidents this month and “scarred” by the recent proliferation of antisemitism within the Labour Party, said Jonathan Arkush, the previous head of the Board of Deputies of British Jews.

“But I don’t believe you should jump from that to thinking our community is not viable as it was,” he said, citing Labour defeats after 2019, media vigilance about antisemitism and police efforts to curb it.

Meanwhile, news of antisemitic incidents continued to flow in throughout this week.

In the Germany incident Thursday in Magdeburg, a city situated about 70 miles west of Berlin, a group of young men allegedly harassed a 22-year-old who was wearing a kippah and proceeded to beat him, inflicting minor injuries, the news site MDR reported. A passerby intervened and the men left the scene. The passerby said they were Arabs.

Also in Germany, in the northern city of Hamburg, three people in a car hurled antisemitic hate speech at a Jewish cyclist while stopped at a traffic light, the news site TAH reported. In Bremen, a northern city located 200 miles west of Berlin, a man wearing a face mask with a Star of David pattern was insulted on the street.

In Austria, a non-Jewish woman was called a “child killer” and harassed by three men in the subway who picked on her two weeks ago because she was reading a book titled “The Jews in the Modern World,” she told the ORF broadcaster Friday. One man pulled her hair, she said.

The woman said police advised her to forget the incident and that it was not antisemitic because she’s not Jewish. The Interior Ministry told ORF it was looking into the incident.

In the United Kingdom, two men confronted a neonatal nurse in an elevator at her London hospital after they noticed her Star of David. They asked the nurse, Hadasa Abrams, whether she believes in “a free Palestine.” She replied “I’m Jewish,” prompting one to say “I want to kill all your people,” Abrams wrote on Facebook.

A Jewish nurse in the UK….

PS. I've hidden her name and picture to protect her privacy. pic.twitter.com/29mc8W26mf

In the Belgian city of Antwerp, a blogger described witnessing a man shouting “Get away, dirty Jewess” at an Orthodox Jewish woman who approached a park bench where the man was sitting.

On May 21, a man was assaulted on a train in Austria after asking two men, whom witnesses said had a Middle Eastern appearance, to stop making antisemitic remarks and denying the Holocaust, a local paper reported.

In London on the same day, a Jewish man was assaulted in his car because it had an Israeli flag. That followed a streak of incidents, including the serious assault of a rabbi outside his synagogue in Chigwell, near London, on May 16.

That same day, a convoy with eight cars displaying Palestinian flags drove through London, with passengers yelling antisemitic obscenities on loudspeakers. One of the passengers shouted “f— the Jews, rape their daughters” while driving through a heavily Jewish part of London.

“Antisemitism in the United Kingdom sadly always spikes when there is conflict in the Middle East, but this feels worse than ever,” Luciana Berger, a former prominent Jewish Labour lawmaker who now works in public relations, tweeted that day.

British Jewry’s security unit documented more than 250 antisemitic incidents in the 17 days that followed May 9 — a 500% increase over the previous 17 days. In May, that unit, CST, has logged 325 incidents — more than any month since 1984, when CST began documenting incidents. In July 2014, during Israel’s Operation Cast Lead in Gaza, CST recorded 317 cases.

Israel and Hamas reached a cease-fire agreement on May 21, but new incidents continue to unfold. On Thursday, one of British Jewry’s biggest charities, Norwood, which helps children with learning disabilities, had its website hacked. A banner reading “Free Palestine End Apartheid” replaced the homepage.

On Tuesday, Elise Fajgeles, a Jewish former City Council member from Paris — the scene of some of the worst violence during the 2014 spike — penned an open letter to Muslims in Europe pleading for their community to crack down on extremists who are perpetuating hate crimes against Jews.

(According to France’s National Bureau for Vigilance Against Antisemitism, Muslims or people from a Muslim background are responsible for all the recent violent incidents where the perpetrators’ identity was established or surmised. The profile of hate speech perpetrators was more diverse, with right-wing extremists accounting for half, the bureau found.)

“I’m not here to speak to you about what’s going on over there,” Fajgeles wrote in her open letter, published in French in The Times of Israel. “I’m going to talk about what’s happening here. I’m here to tell you about me. I want to tell you I’m afraid.” 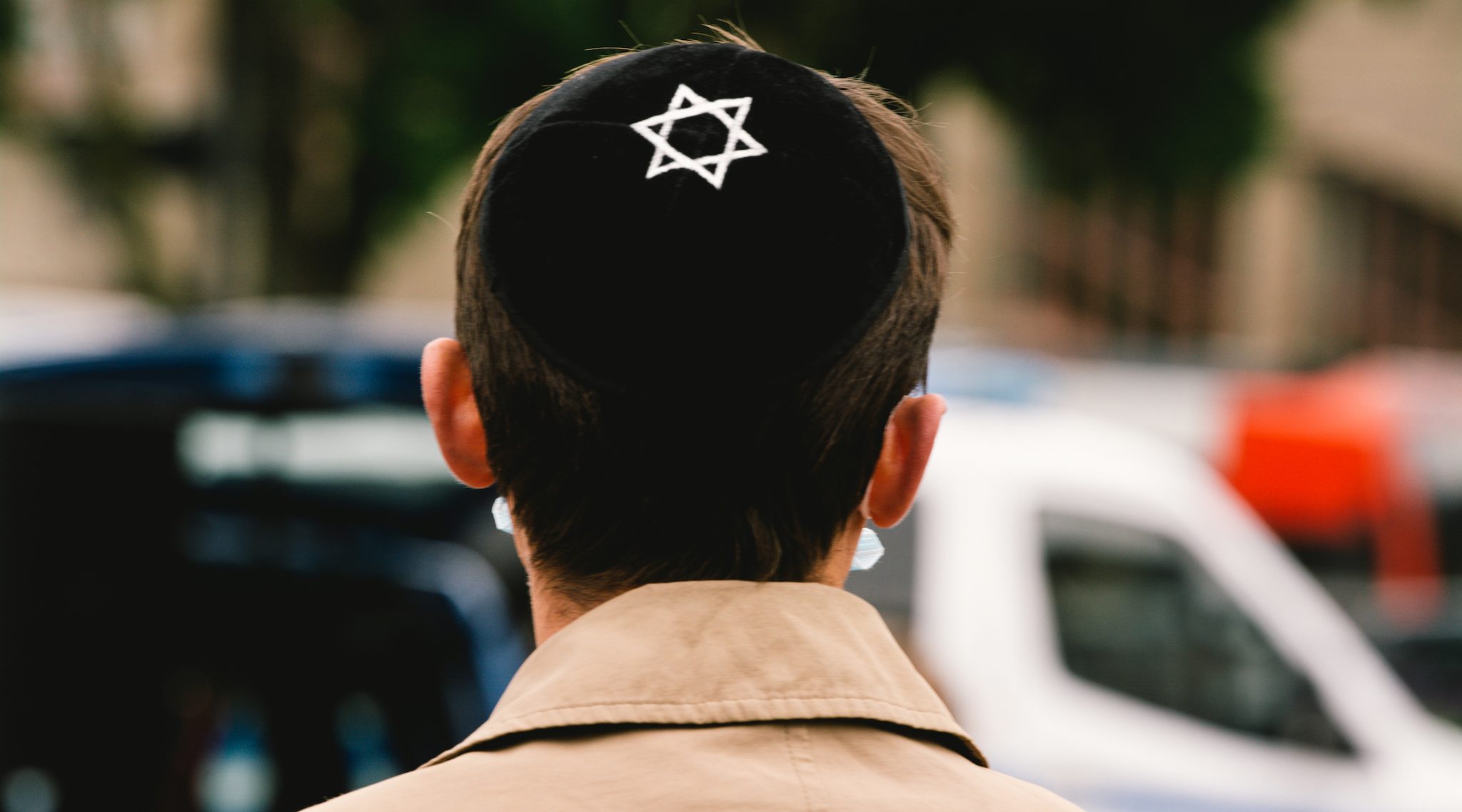