Thank you, Israel, from one of your Arab citizens

I am an Israeli Arab. I was born to a Muslim Bedouin family in the north of Israel, in the Galilee (but I’m not religious). It’s been hard, and painful, to see the violence between Arabs and Jews on the streets of Israel during the past weeks.

I am careful not to speak on behalf of others, but I know that the majority of Arabs in Israel, who are moderate but silent, would agree with me: There is no room for any violence, and the rioters, who attacked innocent civilians, should be punished. Israeli Arabs mainly want to be an integrated part of society. The violent rioters are a fringe, they do not represent the Arab sector, and all of us hope that the riots will cease permanently.

There is a lot of room for improvement in the lives of Israeli Arabs, yet in this darkness that is tearing our country apart it’s time to focus on the positive and reinforce the light.

Israel for me is the place that has given me equal rights as a woman, and an opportunity for a better future. I come from a Bedouin family and think that if the State of Israel had not been established, I would probably be an illiterate shepherd in an arranged marriage to my cousin. That was my mother’s life before she fled the village, and under the protection of the state and with great vigor she was able to raise her nine children to become successful adults.

Instead, I am a tech entrepreneur with a master’s degree from Stanford University married to a loving (Jewish) man, and we have two wonderful sons. Of course, all of this was obtained with dedication and hard work, but Israel made it possible. Living in Israel allowed me to go into fashion modeling, despite receiving death threats from my uncle for dishonoring our family; both of us knew that I was protected by the nation’s laws.

Thank you for the infrastructure of roads, water and electricity (my mother as a child walked miles with a donkey to fetch water, so nothing is taken for granted). Thank you for the democracy that allows us to make our voices heard. Thank you for the economic development that allows us to contribute in high-tech, medicine, science and a variety of other professions. Thank you, Israel Defense Forces, for keeping us safe from the shower of rockets and cold-hearted terrorists who would also persecute Arabs like ISIS did in Syria. And thank you to the deeply kind and warm-hearted people of Israel who will always have your back. Thank you, my beloved country.

I was hesitant to write this, because like many of the moderate and silent Israeli Arabs, who are exposed to hatred on both sides and torn by pain, I got tired of the conflict and just wanted to get away from it. I was also concerned that someone might use what I write to somehow claim that “the Arabs are ungrateful” — but fire should not be fought with fire. Israel is a democratic state in which Israeli Arabs are citizens.

Arabs count for more than 20 percent of the Israeli population. We share the same home and the same future. The only way to stop the violence, curb the extremism and ensure the prosperity of Israel and its people — Jews and Arabs — is to coexist. We have no other choice. 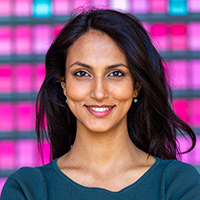 Sophia Salma Shramko was born in Nahariya, Israel. She was the first Muslim Arab to enroll in the Israel Defense Forces' Atuda program in electrical engineering. She is now a tech entrepreneur living in Santa Clara with her husband and children.