I am a Ukrainian Jew. I have lost my mother to Russian disinformation

My mother has been brainwashed by Russian propaganda.

Aside from a brief phone call during the first week of the war, I haven’t been communicating with her. It’s too painful to expend energy on reasoning with her while my people are getting killed at the front lines. I choose to spend that time and energy caring for people who need it, like the three elderly families in my building. I am at peace with my decision, but losing my mother to Russian propaganda breaks my heart.

I’m a Ukrainian Jew who was born and raised in Kyiv, and at 30 years old, I’m just slightly younger than the free nation of Ukraine. I have lived abroad in China, Germany, and Israel, and have worked in the corporate world and in Jewish education. I have had opportunities to develop myself and see what the world has to offer. My mother, in contrast, grew up in the Soviet Union. She was able to be brainwashed into thinking that the Ukrainian military is exterminating its own citizens. I was born in freedom, and I am able to see the truth.

I regularly commiserate with my older siblings, but it’s very hard for us to grapple with the truth that my mother is lost to Russian disinformation. This war and the Russian propaganda is dividing countless families just like ours.

My mother liked the Soviet Union, and the utopian ideals it convinced her were a reality. It was a world in which everything was straightforward, and there was no room for any criticism.

She worked at a shoe factory, where she earned a pretty high salary, and her life was pretty good. She had nothing to complain about.

When the Soviet Union fell, everybody was forced to think for themselves for the first time, and my mother was not ready. She was not equipped with the proper skills to survive in this new world Ukraine was creating. She was lost, and I understand how she became an easy target for Russian propaganda extolling Soviet values, Soviet culture, the myth of how it was cool and great during the Soviet times.

But even if Russia recreates the Soviet Union, the “Russian World” that Putin talks about, it won’t be the same. The Soviet Union is a thing of the past. Yet my mother still believes in that fiction, that fairy-tale.

There is a saying in Russian: “It’s not difficult to trick me because I want to be tricked.”

We all want to believe in miracles. A sort of magic was promised to my mom by the Soviet Union, and for her and other people her age, no matter the facts, no matter the arguments I have, it is so hard for her to question anything. No matter what I say, it only makes her belief stronger.

Incredibly, my mother’s faith in Russian propaganda does not waver even when her life is threatened. She lives close to a plant that produces electro-energy that was being bombed by the Russians.

Q&A: How ‘fake news’ and disinformation fuel the war in Ukraine

During our only phone call during the war, I said to her explicitly, “Russia was bombing this plant right next to your apartment, shells are falling 10 kilometers from your home, and you still don’t believe that it’s Russia attacking us?”

“No, that is Ukrainians bombing their own citizens, their own power plants.”

“Because they’re trying to make a genocide against Ukrainians.”

I tried a different tactic.

“Mom, the rockets that they’re firing are really expensive new technology, and the Ukrainian military doesn’t have them. How can Ukraine be firing them if they’re too poor to have them?”

“They stole those rockets from Russia and then they fired them.”

I spent 20 minutes on the phone trying to convince her, but all our conversation did was convince me of how deeply the propaganda is rooted in her head.

There is no liberal tradition within Russia. Nobody who isn’t dreaming of a Soviet Union restored to its “glory days” wants to be associated with this totally isolated country that is going to experience economic collapse.

Ukrainian is more than a nationality — a Ukrainian is a person who cherishes the democratic values and this country.

Ukraine will never again be a part of Russia, even if people like my mother long for it to be.

The views and opinions expressed in this article are the author’s own and do not necessarily reflect those of J. or the Forward. 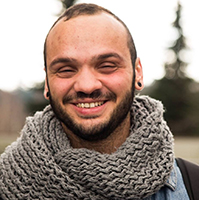 Michael Rozhkov has a B.A. in Political Science from the National University-Kyiv, and has lived abroad in China, Germany, and Israel. He is an LGBTQ activist and currently works as the Moishe House Community Manager for Eastern Europe based in Kyiv.