How to avoid conflict on Victory Day? Take away the microphone.

How do you celebrate victory without causing even more conflict?

That was the dilemma facing city officials in West Hollywood as they prepared to host the annual memorial parade for Russian-speaking veterans of World War II.

Every spring for nearly 40 years on May 9, veterans dressed in Soviet military uniforms bedecked with medals marched along Santa Monica Boulevard toward Plummer Park as their loved ones cheered from sidewalks.

But this year, after Russian forces began a large-scale invasion of Ukraine, the city decided to scrap the plans for the march on Victory in Europe Day and instead host a small gathering in Plummer Park. The city is home to thousands of Russian and Ukrainian immigrants, most of them Jewish, and many are divided over the Russian invasion of Ukraine.

“We’re not going to have an official event this year,” said Tatyana Rodzinek, West Hollywood’s Russian community programs coordinator. “The Russian Advisory Board recommends the change to avoid tension among members of the diaspora.”

Those tensions have surfaced before.

After the Russian occupation and annexation of Crimea in 2014, there was “a lot of political friction” on Victory Day in West Hollywood, said Rodzinek, between the opponents and supporters of Putin’s move.

Following the usual march on Santa Monica Boulevard, the consul general of Ukraine took the stage at Plummer Park to congratulate veterans. But once he began criticizing the Kremlin’s attack on Ukraine and annexation of Crimea, “Someone began shouting out from the audience,” said Rodzinek, adding that the event organizers asked the diplomat to leave the stage to avoid a confrontation.

“There were no fights,” she said, “but the man who was shouting from the audience was very aggressive.”

About 3,870 Russia-speaking expats live in the city of West Hollywood’s Little Odessa neighborhood, according to the city’s survey.

The city began hosting Victory in Europe Day in the late 1970s with the influx of Russian-speaking immigrants, mostly Jewish, who moved from Soviet republics fleeing oppression and antisemitism. A group of immigrants formed the Los Angeles Association of Veterans of World War II, or The Great Patriotic War, in the apartment of a Soviet veteran.

RELATED: Why Russian Jews are divided over the anti-Putin movement

Over the years, as more Russian Jewish immigrants moved to West Hollywood, the association expanded. In the 2000s, nearly 1,200 members were registered as members of the association after it began enrolling veterans’ widows and children.

As the aging veterans entered their 80s and 90s, the number of actual combat members shrunk to about 35, according to Rodzinek. The oldest member of the group is 101 years old.

The Great Patriotic War, which led to the defeat of the Nazi army on the Eastern Front in World War II, is one of the most widely commemorated events in Russia. The war killed roughly 27 million people, leaving a mark on nearly every Soviet family.

Since 2012, every major Russian city has also hosted Bessmertniy Polk, or the March of the Immortal Regime, on May 9, with people carrying flowers, Soviet flags and portraits of their family members who died in World War II. The Kremlin has used the anniversary to display its newest weapons along with the wartime tanks, drawing rebuke from critics for fueling anti-Western sentiment and taking the credit for the World War II victory.

West Hollywood began hosting the March of the Immortal Regime in 2017 but then “realized it was in support of Putin’s regime, agitation and propaganda and we decided to change the name,” Rodzinek said.

Then in 2019, the city decided to keep the march along with the parade but rename it as the “World War II Memorial March.”

This year, as reports about massacres and war crimes committed by the Russian army in Ukraine emerged, the city wanted to make sure the event wouldn’t turn into a political rally, she said.

This year the city will celebrate Victory in Europe Day on May 8 instead of May 9 because it falls on a weekend.

Another change: the board decided this year there would be no stage or microphone available,  so no one would argue about the war.

Ekaterina Kutepova, vice chair of the Russian Advisory Board, said during the group’s meeting in March that there also “needed to be a police present” in case trouble occurred.

Boris Melamed, a Jewish immigrant from Ukraine, son of a veteran — and president of the Los Angeles Association of Veterans of World War II — said he looked forward to the gathering, although he regretted the changes implemented by the city.

“We are disappointed that there is not going to be a parade,” Melamed, 85, said. “Last year we didn’t have a chance to gather with other members. But this year we hope to be able to see them.”

But Rodzinek said that changes were going to affect only this year’s events. 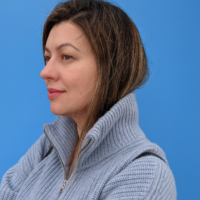 Olga Grigoryants is a multimedia reporter from Moscow who is now based in Los Angeles.