“The first lawsuit I’d like to see is from a Jewish woman who has access to an abortion provider denied,” tweeted legal commentator Elie Mystal after Justice Samuel Alito’s draft majority opinion overturning Roe v. Wade and Planned Parenthood v. Casey was leaked on May 2. This woman, Mystal suggested, should “sue that the Christian rules inhibit her religious freedom under the free exercise clause of the 1st Amendment.”

A few days later, in response to Sen. Kevin Cramer (R-ND) asserting that a fetus be prioritized over a pregnant person, legal analyst and former federal prosecutor Joyce Vance tweeted, “This is a religious view. My religion has a contrary view & in some cases requires that the mother’s life come first. Denying Jewish women an abortion in this situation is a violation of 1st Amendment religious freedom.”

It seems religious freedom appears to “now… only appl[y] to people from one religion,” Vance pointed out. And Mystal acknowledged that the most likely outcome of his imagined lawsuit is “She’ll lose.” Nevertheless, “it’s still the right argument to make,” he said.

The potential plaintiff would likely lose because legal, political and cultural forces have combined to produce a Supreme Court that minimizes the way conservative Christianity has shaped opposition to abortion and maximizes a view that abortion restrictions are rational, secular and incapable of harm — religious or otherwise. Despite these challenges, Jewish voices in support of abortion access and care can help build a more pluralistic and equitable legal infrastructure for religious freedom.

How did we get here?

As historian Jennifer Holland explained, conservative anti-abortion activists — frequently, but not exclusively, a coalition of Catholics, Mormons and white evangelicals — borrowed the language of rights from liberals in order to dodge “explicit sexism and religiosity” and craft “secular arguments centered on the civil rights of fetuses … to deflect attention away from the women who sought abortions.”

Thus while Alito’s draft opinion teems with his well-documented hostility to abortion and glowers at the court’s decisions in Roe and Casey — which were, he says, “egregiously wrong and deeply damaging,” “exceedingly weak” and “unworkable” — it flatly denies that restricting abortion harms pregnant people. If anything, it tries to reduce the significance of “allow[ing] each State to regulate abortion as its citizens wish.” But it also creates extraordinarily wide latitude for such regulation, insisting that abortion regulations “must be sustained if there is a rational basis on which the legislature could have thought that it would serve legitimate state interests.”

The draft offers a laundry list of “legitimate state interests,” priming legislators with an array of Alito-vetted rationales for restrictions and prohibitions, including the anti-abortion mainstay “respect for and preservation of prenatal life at all stages of development,” the duplicitous “protection of maternal health,” the strawman “preservation of the integrity of the medical profession” and more.

This is why Jewish arguments for abortion access matter: They help counter the cloaking of such “state interests” as moral or rational or secular. As historian Gillian Frank has documented, “For a long time, the loudest voices, the most visible voices, have been religious voices that have opposed abortion. But they are not the only story.”

Thus, last week, in response to the leaked draft striking down Roe, Rabbi Hara Person, CEO of the Reform movement’s Central Conference of American Rabbis, wrote, “We are proud that Jewish tradition regards abortion as essential health care … Restricting access to reproductive health care impedes the freedom of religion granted by the First Amendment.” Even the Orthodox Union’s milquetoast statement that refused to endorse broad abortion access declared it “cannot support absolute bans on abortion” and insisted on the necessity of abortion when “pregnancy to term poses real risk,” including to mental health.

Judaism offers an alternative: a deeply rooted textual tradition from the Hebrew Bible, Mishnah, and Talmud onward that supports abortion. Indeed, there are times, as Rabbi Daniel Bogard recently laid out, when “access to abortion services is a religious requirement” for Jews.

For Jews who can become pregnant, access to abortion services is a religious *requirement*, and has been for thousands of years. Surprised? Let's dig into some of the texts 🧵 1/

Jewish activism around abortion has a long history. Prior to the nationwide legalization of abortion in 1973, there were American rabbis who helped women access safe illegal abortions.

There have long been Jewish doctors who support and provide abortion care. According to Frank, research for his forthcoming book “Making Choice Sacred: Liberal Religion and Reproductive Politics Before Roe v. Wade,” shows “Jewish physicians, such as Alan Guttmacher, were at the center of the struggle to make abortion provision more accessible in the United States in the formative years around Roe v Wade. They also included numerous Jewish physicians in hospitals and private practices who were willing to offer abortion care when others would not.”

Much of that work was done quietly, but more recently Jewish voices have become louder, speaking up about reproductive justice and religious freedom. Rabbi Danya Ruttenberg, the National Council of Jewish Women’s scholar-in-residence and a founder of Rabbis for Repro, told Jezebel that conversations about a possible post-Roe lawsuit are underway.

Whether or not a lawsuit moves forward — and there are reasons to be wary, as Ruttenberg underscored — Jewish perspectives on abortion offer a necessary corrective to claims that religion is anti-abortion. Religious freedom, in turn, withers when law and public policy refuse to recognize that religions vary — and many traditions, including Judaism, center the needs and interests of pregnant people. 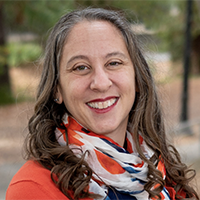 Ronit Y. Stahl is associate professor of history at UC Berkeley, the interim administrative chair of the Religious Diversity Cluster of the Othering and Belonging Institute and a Greenwall Faculty Scholar in bioethics. She is the author of “Enlisting Faith: How the Military Chaplaincy Shaped Religion and State in Modern America” (2017).