My heart is with Ukraine, and I’m doing what I can to help

What is the definition of war? “A state of armed conflict between different nations or states or different groups within a nation or state.”

But is every war the same? What turns a war into a genocide? Where do we draw the line?

Since its invasion of Ukraine, Russia has been cut off from the world economically and has been labeled a pariah state. Russian citizens have no idea what is going on in Ukraine. They are unaware that their soldiers are killing thousands of innocent people and that their own soldiers are dying by the thousands.

It is now illegal in Russia to call what is going on in Ukraine a war. You might be shocked by this news, but Russia has always had a history of aggressively suppressing freedom of speech and information. I know it because my own family has been a victim of it.

Ukraine holds the graves of my ancestors. In 1918, during the Russian Revolution, my great-great-grandfather and his three brothers were murdered in a pogrom by the White Army, and his young wife passed away from tuberculosis and grief after her husband was killed. My great-grandfather Isaac was saved by his grandfather when he took him to Moscow, where he married my great-grandmother Bertha.

All of them, including Bertha’s mother, lived there in a small room in a communal apartment. In 1938, my grand-aunt Tania was born. In 1941, Nazi Germany invaded the Soviet Union, beginning by occupying Ukraine. Isaac’s grandparents and Bertha’s mother were on vacation in Ukraine and were murdered by the Nazis.

Today once again, Ukraine is a war-torn country. The Ukrainian people are fleeing to bordering countries because their homes and lives are being destroyed. In around four months, some 4.5 million people (mostly women, children and the elderly) left the country.

I am here in San Francisco because my mother’s family fled the former Soviet Union to escape totalitarian and religious persecution.

My mother left Moscow in 1980 with her parents and grandfather; they held just $400 in their hands. Life for my family at first was hard; my grandfather swept floors and painted fences to make money, while my grandma went to school to become a medical assistant. They worked hard, and soon they had enough money to have a comfortable life.

But, something was missing. My great-aunt Tania Hefits, who was married to a refusenik, stayed behind with him in Moscow. Between 1981 and 1986, my grandma and great-grandpa started a campaign to get her out.

They met with then-Mayor Dianne Feinstein, asking her to contact major political figures in the world who could help my great-aunt and her husband escape. This was before Feinstein traveled to Moscow to meet with Russian authorities. My grandmother begged her to meet with my great-aunt to see how she was holding up.

Afterward, my grandma and her dad went to Washington, where they were able to talk to my great-aunt via government phone lines. During their conversation, five senators were present, and right before they left, my great-grandfather gave a speech that concluded, “If there is a God out there somewhere, please let me see my daughter again.’’

Our government finally negotiated my aunt’s release and she landed on U.S. soil in 1986, holding the world record for the longest waiting refusenik. She and her husband, Benjamin Bogomolny, are featured in the Guinness Book of World Records for being the longest waiting refuseniks to leave the USSR. Upon their arrival, Aunt Tania was given the key to the city of San Francisco by Mayor Feinstein, which she holds to this day in her small apartment on 11th Avenue.

It is because of my family and their long history of suffering that I am able to so deeply understand the pains of the Ukrainian people, and my will to help them is stronger than ever.

Every day during dinner, my mom has CNN on the TV. After Russia’s invasion,  I would come home from school, sit down at the dinner table and eat as I watched people dying, suffering and fleeing Ukraine.

I couldn’t deal with knowing that there were people starving and dying in the world while I sat comfortably eating my dinner.

And thus I had the idea to start a food drive to help Ukrainian refugees. I brought the idea to some friends that attend Roosevelt Middle School with me, all Jews whom I have known since preschool. They all supported me through the process of asking for permission from school staff and helped me set out containers in which to collect the food. Together we spent countless lunches and breaks working on banners that I hung on the school walls to advertise.

I also published an advertisement in my school newspaper, and donations came flooding in. By the end of the school year we had filled two large bins with food items. I just packaged them and will soon be driving them to a facility in Sacramento that distributes food to Ukrainian refugees who have fled to the United States.

While this donation will go to Ukrainian refugees here, I also wanted to make an impact on the ground in Ukraine.

So I began selling baked goods at Friday night services at Congregation Emanu-El in San Francisco in advance of my May 7 bat mitzvah. And I have continued doing so at every service and major event.

So far I have raised more than $1,000. I plan to donate the money to two different organizations that are working on the ground in Ukraine: World Central Kitchen, which is preparing warm meals for refugees and locals in Ukraine and bordering countries, and Hearts for Ukraine, a local organization run by friends of my parents that is delivering first aid and other medical supplies to Ukrainians and refugees. I urge you to help, as well, in any way you can. 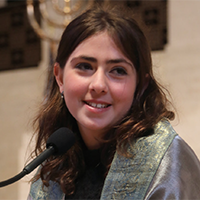 Leah Mordehai, 13, is a rising eighth-grade student at Roosevelt Middle School in San Francisco, where she lives with her family.