Why is this month of Av different from all other Avs? An extremely rare triple conjunction, not seen since 324 BCE, in the days of Alexander the Great, occurs July 31-Aug. 1. Mars/Ma’adim, Uranus/Oron, and the Lunar North Node (a significant symbol in Jewish astrology, known in Sefer Yetzirah as T’li) meet in Taurus/Shor. Alexander established the manifestation of Hellenism throughout the “known world.” This triple conjunction opens the energetic door to dramatic global change. The sum weight of individual decisions made in collective response to these tremendous upheavals to come is in the balance.

In Av, we must each examine our own ears. Are we listening to what the Earth is telling us? July 31’s trine of the Sun to Jupiter/Tzedek, with Venus/Noga square Chiron, the asteroid known as the “wounded healer,” and Mercury/Kochav opposite Saturn/Shabbtai turns up the wakeup call’s volume.

Tisha b’Av comes on the Shabbat of the Torah portion Devarim, an extraordinary calendrical kindness, as one must feast on Shabbat, delaying the fast of Tisha b’Av until Aug. 7, with Mars square Saturn and Venus trine Neptune/Rahav. Let humility and yearning for teshuva (repentance) fuel our particularistic mourning, leading to universalist inspiration.

Av peaks with pride, drama and passion Aug. 11 on Tu b’Av (the Jewish holiday of love), the full moon in Aquarius/D’li, with the sun and moon square Uranus, Mars sextile Neptune and Venus entering Leo. The trine of Mars to Pluto with the Sun opposite Saturn Aug. 14 is a world-class power struggle between egos and ideals. Av calls but are you listening? “Listen, my child, to your father’s instruction and do not forsake your mother’s teaching.” The ancestral wisdom of the Imahot and Avot, the Mamas and the Papas are available to all of us at this time of upheaval. Hear their voices!

The Tikkun of Av is hearing; listen closely, especially within the realm of romantic love and creativity. Mars/Ma’adim, Uranus/Oron, and the North Lunar Node conjunct July 31-Aug. 1, bringing a sense of instability around finances, which contributes to anxiety when Mars squares Saturn/Shabbtai Aug. 7. If you’re listening to your heart as well as the voice of your beloved, you’ll understand your value is far beyond your paycheck. Mars sextiles Neptune/Rahav Aug. 11 and trines Pluto Aug. 14. Powers of imagination are strong now; share your dream with supportive partners Aug. 20 when Mars enters Gemini/T’omim.

The ultra-rare triple conjunction of Mars/Ma’adim, Uranus/Oron and the North Lunar Node in Taurus on Aug. 1 powerfully disrupts the status quo, reprioritizing everything in your life if you stop resisting inevitable change. Venus/Noga trines Neptune/Rahav Aug. 7 and opposes Pluto Aug. 9, empowering deep and sensitive listening, especially about home and family. Venus enters Leo/Aryeh Aug. 11 at the full moon in Aquarius/D’li on Tu b’Av. Live up to your own ideals. Venus trines Jupiter/Tzedek Aug. 18, followed by the last quarter moon in Taurus Aug. 19. Choose your best self every day.

Communication is a two-way street, and the Tikkun of Chodesh Av is hearing. It’s time to listen to how your own thoughts influence how you communicate with others. Mercury/Kochav opposite Saturn/Shabbtai July 31empowers humility. A little will go a long way! Mercury enters Virgo/Betulah Aug. 4; how can your strengths best be of service? Mercury trines Uranus/Oron Aug. 16, inspiring originality. Mars/Ma’adim enters Gemini Aug. 20, lighting a fire under your proverbial feet! The opposition of Mercury to Neptune/Rahav and trine to Pluto Aug. 21-22 demands absolute clarity around personal commitment.

The Tikkun of Chodesh Av is hearing; what voices are you listening to? Fears of scarcity deliver false messages. Face your fears by taking a deep dive, eyes wide open, into the objectively true state of your personal worth at the first quarter moon in Scorpio/Akrav Aug. 5. Venus/Noga in Cancer through Aug. 10, focusing attention on security. The full moon in Aquarius/D’li on Tu b’Av Aug. 11 reminds you that holding on too tightly is bad for your health. Wise, supportive friends help ground you at the last quarter moon in Taurus/Shor Aug. 19. You are safe.

Chodesh Av is Leo’s month, and the attribute of hearing is Av’s Tikkun. Developing excellent listening skills is a mark of great leadership. Luckily the sun trines Jupiter/Tzedek July 31, infusing you with positive energy for the task. Discerning self-perception is critical Aug. 11, with sun square Uranus/Oron, the full moon in Aquarius/D’li opposite your natal sun, and Venus/Noga entering Leo. As the psalmist says, “I meditate within my heart and diligently search my spirit.” Do so Aug. 14 with the sun opposite Saturn/Shabbtai. Get grounded when the sun enters Virgo/Betulah Aug. 22.

Chodesh Av’s Tikkun is hearing. Listen to ancestral voices with Mercury/Kochav opposite Saturn/Shabbtai July 31. Your job is to discern between inherited wisdom and hereditary trauma when Mercury enters Virgo Aug. 4. Original concepts and bright ideas are on the menu when Mercury trines Uranus/Oron Aug. 16; your imagination is stretched to the utmost Aug. 21 with Mercury opposite Neptune/Rahav. Mercury’s trine to Pluto Aug. 22 empowers the embodiment of your highest vision if you’re bold enough! Mercury enters Libra Aug. 25, seeking harmony and fair partnership. Be kinder to yourself.

Friendships and communal identity are the focus of Chodesh Av’s Tikkun. Venus/Noga squares Chiron July 31; is nice really good enough? Venus sextiles Uranus/Oron and Mars/Ma’adim Aug. 2 empowers true empathy. Perform powerful acts of sacrificial love Aug. 7-9 with Venus trine Neptune/Rahav and opposing Pluto. Venus enters Leo/Aryeh Aug. 11 at the full moon in Aquarius/D’li on Tu b’Av; others place their vulnerable trust in you and there is nothing you cannot accomplish for the sake of all that is fair when Venus trines Jupiter/Tzedek Aug. 18.

Your public-facing career identity needs the Tikkun of Chodesh Av, which is hearing. Shocking, sudden changes are triggered by July 31-Aug. 1’s triple conjunction of Mars/Ma’adim, Uranus/Oron and the North Lunar Node in Taurus/Shor. Are you listening to what’s being said? Your ears are unplugged by the first quarter moon in Scorpio Aug. 5. Be patient in negotiations Aug. 7 with Mars square Saturn/Shabbtai; hold out for what you deserve Aug. 9 with Venus/Noga opposite Pluto. Patience and knowing your true worth prevail Aug. 14 with Mars trine Pluto.

Chodesh Av’s Tikkun of hearing is activated in the realm of your belief systems. Planetary ruler Jupiter/Tzedek stationed retrograde Erev Rosh Chodesh Av and remains retrograde through late November. Listen to the voice of your first spiritual love: “This is what the LORD says: ‘I remember the devotion of your youth, how as a bride you loved me and followed me through the wilderness, through a land not sown’” (Jeremiah 2:2). The sun trines Jupiter July 31, illuminating your heart with that pure, original light of love. Venus/Noga trines Jupiter Aug. 18; luck lets love lead.

Be honest when integrating the lessons of Chodesh Av’s Tikkun of hearing. On paper, you’re hearing, but are you really listening? Are you internalizing what is being said, especially in the realm of those things you share with others, such as resources, possessions, values and valuables? Mercury/Kochav opposite Saturn/Shabbtai July 31 enables a deep examination of why you may resist deep listening. Those reasons make themselves apparent Aug. 7 with Mars/Ma’adim square Saturn. The more you resist, the harder the pressure, peaking Aug. 14 at the sun-Saturn opposition. Truth brings liberation.

The Tikkun of Chodesh Av is hearing; are you listening to what your partners are saying? Closed ears equal closed minds. The upheaval triggered by the triple conjunction of Mars/Ma’adim, Uranus/Oron and the North Lunar Node July 31-Aug. 1 in Taurus/Shor is a career disrupter, but you’re pursued by new opportunities at Tu b’Av with Sun square Uranus and the full moon in Aquarius with Venus/Noga entering Leo/Aryeh. Bright ideas abound when Mercury/Kochav trines Uranus Aug. 16. Uranus stations retrograde Aug. 25 through mid-January 2023. Gather steam for the next big push.

The Tikkun of Chodesh Av is hearing, and you need to be listening to your body. The healing arts is your focus this month, especially your mind-body connection, which may be ready for an entire makeover when Venus/Noga trines Neptune/Rahav Aug. 7. You’ve got to believe in something before you can manifest it. Your energy gets a big boost when Mars/Ma’adim sextiles Neptune Aug. 11. Mercury/Kochav opposes Neptune Aug. 21, giving you the opportunity to assess things without either rose-colored glasses or doomsday proportions. An undistorted perspective yields sober, responsible decisions. 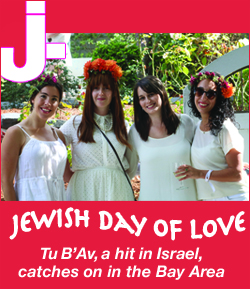