The perils of California textbooks that teach Jews are white

Have you ever asked a young person what ancient Jews looked like? With what students are learning in California textbooks, you may be quite surprised with the answer.

You see, in California, sixth-grade public school students begin to study “world cultures and civilizations,” and in many cases, it’s their first time learning about numerous minorities, including Jews. First impressions are profound, and in this case will have an impact on future encounters.

And what is a California sixth-grader’s first impression of Jewish people’s heritage?

Just leaf through the pages of accredited California textbooks. You’ll be shocked. The lessons about ancient Israel are not illustrated with people who are ethnically Middle Eastern and multicultural, but with people who are white. This is accomplished mostly through the use of classical European paintings, done by artists who apparently imagined the entire cast of the Bible as white. Abounding in the textbook pages are images of paintings that feature blond, redheaded and assorted other white Egyptians, Jordanians and Israelites.

Missteps like this in public education may play a direct role in propagating false notions about Jewish and Israeli whiteness, and they have served to abet the erasure of Judaism’s multiculturalism and Middle Eastern and North African heritages.

Furthermore, these educational shortcomings also serve to erase the lived experiences of Jews of color, many of whom are descendants of diverse diaspora ancestries.

And as California’s curriculum often impacts curricula adopted throughout the United States, this is a national issue. Take the California-accredited 2019 textbook on world history and ancient civilizations for sixth-graders from McGraw Hill. In the section on ancient Israel, there is not a single image of an ancient Jew that is easily identifiable as Middle Eastern. Rather, there are images of Moses, Ruth and Naomi — all identifiably white.

It’s no shock that students who are provided images of white Jews — students whose first academic impression of Israel is as an ancestrally white people — come to associate Israel and Judaism with white supremacy.

And where does this lead?

Let’s just look at one example out of thousands. On the UCLA campus a few months ago, a group of primarily white students was calling for the erasure of the Jewish state. Not surprisingly, they were chanting “From the river to the sea …” — the call of anti-Israel zealots from near and far, the call of terrorists responsible for the murder of Jews.

While many Jews hear that chant as a cry for Jewish erasure, an end to the Jewish right of self-determination in their ancestral homeland, it is doubtful that the average U.S. pro-Palestine protester really intends to call for the erasure of the Jewish state or the genocide of its Jews.

But if not calling for the end of the Jewish state, then what is the average American at a pro-Palestine demonstration or anti-Israel protest chanting for?

This might provide some insight: At that rally in March, a Los Angeles–born, 22-year-old Jewish student was asked what Palestine needs to be freed from. The UCLA student, a member of Students for Justice in Palestine, replied: “From colonization, the oppression of Zionism’s white supremacy.”

A second-year UCLA student who is pro-BDS answered: “The apartheid racism of white colonists.”

In fact, a combination of student protesters and people carrying pro-Palestine signs, wearing pro-Palestinian shirts and supporting the boycott, divestment and sanctions movement were asked the same question individually and on various days.

Their statements revealed a truth: In the United States, Israel and Jews have become synonymous with white privilege. Pro-Palestinian ideology in America is no longer about peace and equality in the region, but about fighting Western, white hegemony.

And where do Americans, and Californians, in particular,  learn that all Jews are white?

From accredited textbooks. These misrepresentative lessons on Jewish ancestry have molded student perspectives on Jews.

If we wish to curb rising antisemitism and anti-Zionism, we must address the American portrayal of the Jewish community. We need increased discussion and better education: to teach that while many Jews benefit from passing as white, passing is not being. We need accurate images and proper conceptualization.

While not at all scientific, the data gathered on the UCLA campus supports such action. The demonstrators’ replies validate how assumptions of Jewish whiteness directly influence current antisemitic rhetoric in the U.S.

This is what our education must teach to fully meet the equitable, diverse and inclusive future that awaits our generation and generations to come. 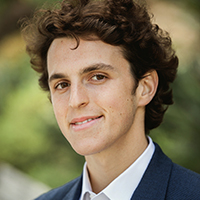 Isaac Levy is a student in the UCLA honors and Scholars programs.