Wipe out everyone’s debt? Is the Torah serious about that?

We are nearing the end of a shmita (sabbatical) year in the Land of Israel. There are many farmers who took the opportunity to observe the commandment by leaving their land fallow, and stories of miracles associated with the practice are proliferating throughout the religious communities in Israel and the diaspora.

The bulk of the laws that pertain to shmita can be found in the Book of Bamidbar (Numbers) in the parashah of Behar. However, there is one lesser known commandment involving the seven-year agricultural cycle that is presented in the current Torah portion.

“At the end of seven years you should have a shmita. This is the matter of the shmita; every creditor shall remove his hand over his fellow, he shall not press his fellow and his brother, for it is called a shmita for God.” (Deuteronomy 15:1)

In addition to the agricultural rules associated with shmita, there is another realm in which the year itself brings with it a transformational reality in the affairs of economics. All loans are forgiven. Full stop. The verb lishmot implies some kind of stopping or desist. With the land, it means to allow the land to rest and to stop farming. With respect to lending, it implies stopping to collect loans.

What could the connection be between the two commandments?

It seems that the net effect of both is that they force all individuals to relinquish a sense of ownership, power and control. By forcing farmers to leave their land fallow, they are forced to withdraw their feeling of ownership and all people become equal in the Land of Israel, with the same rights to enter and enjoy each other’s fields.

By instituting a remission of loans, no one feels beholden to their fellow. That should not be misunderstood as the Torah’s disdain for capitalism and a free-market economy. On the contrary, the fact that there is land ownership at all clearly indicates that there is an expectation of private property being central to a Torah-centered economy.

What does exist is a social safety net that allows the economically disadvantaged an opportunity to reset and readjust.

Anticipating the concern that members of society would have regarding their loans, the Torah addresses the potential reluctance of individuals to lend each other money. “Should there be a destitute individual from your brethren in one of the gates of your cities that the Lord, your God, gives to you; do not harden your heart and close your hand towards your destitute brother. You should open your hand to him and lend him whatever he may be lacking.” (Deut. 15:7-8)

We are presented with a straightforward directive to lend to others.

Understanding that not all positive commandments compel people to act, the Torah continues: “Bewarned, lest there be a negative thought in your heart, saying, ‘The seventh year is coming closer, the shmita year,’ and your eye will look badly upon your destitute brother and you will not give to him and he will call to God regarding you and you will bear a sin.” (Deut. 15:9)

The Torah understands that there is an economic disincentive to give a loan to a poor person close to the sabbatical year. It is therefore emphasized that such an attitude is not only negative, but is regarded as sinful.

The Torah does not just use a stick to enforce this commandment. There is a carrot thrown in as well. “[B]ecause of this matter, the Lord your God will bless you in all of your actions and in all of your undertakings.” Not only would one be avoiding sinful behavior, but there is reward that is promised for opening one’s heart to a fellow Jew.

The poverty of a fellow creates an obligation for each member of the community with the resources to assist.

Further, the discussion centers around lending and not giving gifts of charity. There are obligations there, as well, but the Torah wants to preserve the dignity of individuals by compelling Jews to extend loans, even when there is the risk of never being repaid because the shmita year will wipe out the debt.

Lending to others within the community is something that is certainly in widespread practice across the globe. There are Hebrew Free Loan societies in most major communities, including the Bay Area.

The Rabbis have also developed a system for preserving a loan from being canceled by transferring the debt to an institution and away from a private individual. Notwithstanding the current communal endeavor to assist the poor, there is a lesson for all of us: Creating opportunities for our fellow community members to raise themselves up in times of hardship is timeless. 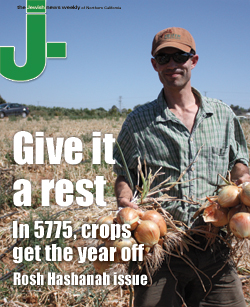