Polish authorities arrested American tourist Jon Minadeo Jr. for violating the country’s hate speech laws after the Holocaust denier demonstrated in front of the Auschwitz-Birkenau extermination and concentration camp. He was released shortly after.

According to a press officer with the Auschwitz Memorial, two suspects later identified as Minadeo and Robert Wilson “illegally bursted” into the site on Aug. 27 and “escaped immediately after taking out the hidden messages & taking the pictures.”

“This disgusting and primitive incident was immediately reported to the authorities that began investigating,” Paweł Sawicki wrote in an email to J.

At home in the U.S., in addition to hosting near-daily livestreams for 4,200 followers on his website Goyim TV, Minadeo periodically engages in what he calls “activism”: hanging antisemitic banners on highway overpasses that blame Jews for fomenting a “race war,” for example, and orchestrating nationwide flyer campaigns.

The 39-year-old, who until recently lived in Petaluma, has more than 10,000 combined followers on Telegram, Gab and Goyim TV, where he rants against Jews for hours at a time.

His arrest came after he published a smiling photo taken at the death camp where 1.1 million mostly Jewish victims, including more than 200,000 children, were murdered by the Nazis in gas chambers or died from starvation and disease.

Wearing sunglasses, shorts and athletic shoes, Minadeo held up a sign reading: “Greenblatt suck 6 million dicks,” a reference to Anti-Defamation League CEO Jonathan Greenblatt, a frequent target. Standing next to him was Wilson, nicknamed “Aryan Bacon,” formerly of San Diego County. He held a sign that said “Shoah the ADL.”

Minadeo published one of the photos on Gab, a site known for being welcoming to Nazi sympathizers and members of the extreme right; he has 4,900 followers under his moniker Handsome Truth. The post said: “We must continue exposing the Jewish anti white propaganda! That for decades has conditioned our people to be slaves for the Jews.” It attacks the ADL as “an anti white terrorist organization” and says the Holocaust is “a f***ing hoax.”

The post garnered more than 850 “likes” and enthusiastic expressions of encouragement. Some also left words of warning: “Hope you left already, in Europe they can arrest you for shit you said in America,” user @IllinoisValleyMale wrote.

Minadeo is the ringleader of the so-called Goyim Defense League, an antisemitic group that in 2021 was responsible for at least 74 propaganda incidents in the U.S., according to the ADL. The group orchestrated numerous flyer drops in Bay Area cities, leaving them on sidewalks and in front yards weighted down with white rice or pebbles, that blamed Jews for a cornucopia of perceived ills, from the war in Ukraine to gun control to “mass immigration.”

Minadeo hosts frequent livestreams on Goyim TV where he espouses virulent antisemitism, racism and homophobia, soliciting viewers for “donations” in each episode.

Earlier this year he gained even more notoriety in the Bay Area after multiple newspapers reported his girlfriend, a popular yoga instructor, had been fired for links to the hate group.

Days after the photo first appeared on Gab, other images of Minadeo and Wilson smiling at the Auschwitz gate generated outrage on Twitter. “My great grandmother would spit on him and have choice Yiddish words,” one person wrote on Sept. 2.

Minadeo documented his vacation to Poland in a number of other photos and videos — including one in which he verbally attacks a South Asian man for more than 4 minutes.

The video, which went viral on Reddit, bore the headline “American tourist in Poland goes on racial tirade against Indian guy.” It shows Minadeo, who espouses the “Great Replacement” theory — that Jews are orchestrating mass migration to European countries to dilute white populations — harassing the man on a sidewalk. He calls him an “invader” and tells him to go back to India. “Why are you in Poland? Why are you here?” Minadeo says while following him. “You have your own country.”

A different video posted on Gab shows Minadeo sitting on a restaurant patio. He is wearing a “white pride” T-shirt and a long, gold-colored swastika necklace, when a tall man in a tartan blazer approaches him and tells him it is illegal to display a swastika in Poland.

The man turns and walks away. Minadeo follows him inside the restaurant, recording him.

“Who makes it illegal?” Minadeo asks. “The Polish government,” the man replies. “No, the Jewish government,” Mindeo responds. He calls the man a “cuck” and a “f***ing pussy” before asking if he would like to “go outside” to fight.

In announcing his arrest on Sunday on Gab, a dour-looking Minadeo holds up a legal document outlining some of his rights as a defendant. His jewelry, including his swastika necklace, is gone.

The Polish national police did not immediately respond to a request for comment. Article 256 of the Penal Code states: “Whoever publicly propagates a fascist or another totalitarian state or calls for hatred against national, ethnic, racial or religious differences or for non-denominational status, is subject to a fine, penalty of restriction of liberty or deprivation of liberty for up to 2 years.”

“Got handcuffed & arrested in Poland today for (((Hate Speech))) regarding Aushwitz [sic],” Minadeo’s Gab post read. “Just got released tonight with a fine and my chains and computer temporarily confiscated. Life’s good! You can’t keep me down Jews! #HandsomeTruth.” 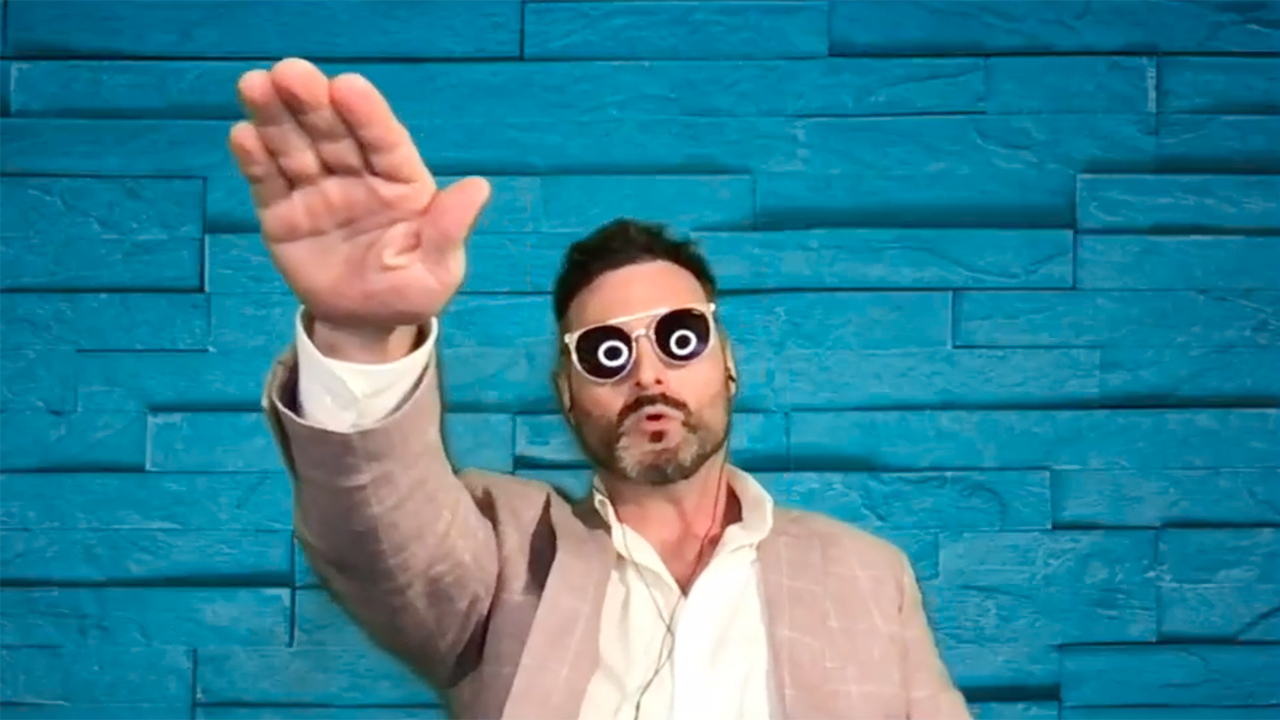 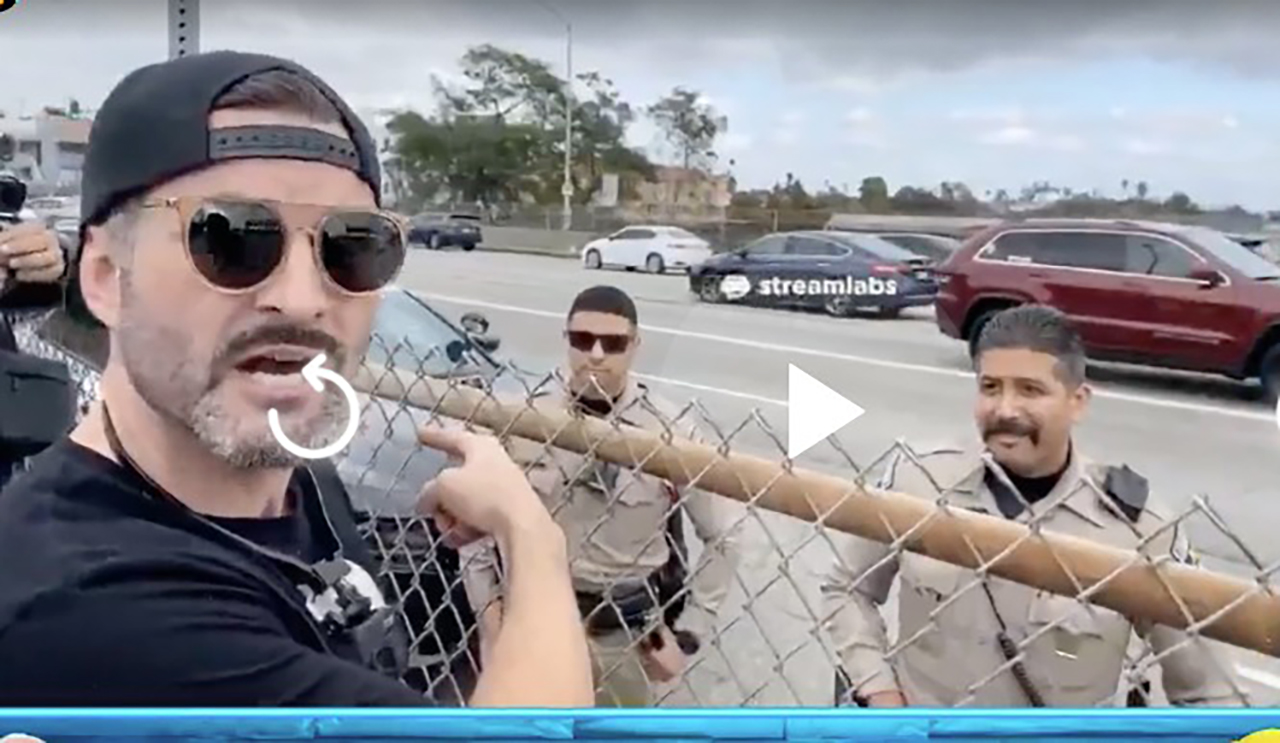