UPDATED: As of Nov. 7, Goyim TV is back online.

Goyim TV, a website that functions as a digital home and powerful propaganda tool for one of the nation’s most notorious antisemitic hate groups, was taken down after a “hold” was placed on the site by its domain provider. It remained down on Monday.

A domain provider is a company that sells services to support a website, like registering a website’s name or providing hosting, explained Daniel Kelley, a director at the Anti-Defamation League’s Center for Technology and Society. Among the largest domain providers are Bluehost, Namecheap and GoDaddy.

Kelley said based on publicly available information, it was not clear which domain provider placed a hold on the site.

According to ICANN, an international nonprofit that manages web addresses, a hold is “an uncommon status” that is “usually enacted during legal disputes, non-payment, or when your domain is subject to deletion.”

The takedown represented one of the most impactful actions yet taken by an internet company against the website and its followers, who call themselves the Goyim Defense League. Goyim TV fuses virulent antisemitism and other forms of racism with entertainment, often engaging teenagers and attracting an audience of thousands. The website’s leaders said on social media the outage would be temporary.

The hold came on the heels of a flood of media attention after members of the Goyim Defense League, led by 39-year-old Jon Minadeo Jr. of Petaluma, attempted to capitalize on the rise in antisemitic discourse following statements from Ye, the rapper formerly known as Kanye West; on Oct. 22 the group hung a a banner above a Los Angeles highway proclaiming West was “right about the Jews.”

A week later, the hate group projected an antisemitic message at a college football game attended by more than 70,000 people in Jacksonville, Florida.

Minadeo announced the takedown on Oct. 23, the day after the L.A. banner drop in a post on the far right social network Gab.

“Jews just pressured our DOMAIN PROVIDER to pull Goyim[TV] down,” he wrote. “I need you guys to help us find a censor free provider.”

Like the neo-Nazi Daily Stormer and other extremist websites, Goyim TV has faced takedowns from internet companies before, and its followers are banned on mainstream social networks such as YouTube and Instagram. Payment services like PayPal refuse to process digital payments. But time and again, the group has found ways to stay online and make money with help from internet companies that profess a form of free-speech absolutism common in the internet age.

Two years ago, the Washington-based domain registrar Epik — known for being hospitable to extremists — determined Goyim TV had gone too far even for the company and removed it. But the site quickly relaunched on BitChute (an ”alt” video-hosting site run by a U.K.-based company), posting the same antisemitic conspiracies.

“The norms, rules and laws for online behavior are still evolving,” regional ADL director Seth Brysk said at the time. “So the public can and should continue to play a role in pushing back against harassment, lies and extremism.”

Some publicly celebrated the Goyim TV takedown. Even if temporary, it hobbled a powerful fundraising tool and the launch pad for the hate group’s nationwide antisemitic flyer campaign.

“Amazing to hear the genocidal antisemitic website and streaming platform of Goyim TV/GDL has been taken down by its service providers,” one Twitter account wrote. “Big step against a neo-nazi network that has frequently attempted to violently intimidate Jewish communities across the United States.”

Amazing to hear the genocidal antisemitic website and streaming platform of Goyim TV/GDL has been taken down by its service providers. Big step against a neo-nazi network that has frequently attempted to violently intimidate Jewish communities across the United States https://t.co/tLciUIoHyd

The website raises thousands of dollars each week during livestreams hosted by Minadeo; anonymous donors chip in and, in return, receive live thanks from Minadeo, who cites their usually extremely antisemitic handle. GDL accepts payments in cryptocurrencies Bitcoin and Monero, and digital payments processed on Odysee, a video-sharing site owned by a New Hampshire-based company with a libertarian bent. Minadeo also accepts checks mailed to a post office box in Petaluma.

On Telegram this week, Goyim TV apologized for the outage and said the group hoped to have the website back up soon. Meanwhile, leaders revealed a new design for a conspiratorial flyer, capitalizing on tensions between Black and Jewish communities in the wake of West’s statements. The flyer proclaims, “Every single aspect of the slave trade was Jewish.”

“Goyim TV will be back up between Tuesday and Wednesday,” the post said. “Sorry for the downtime.” 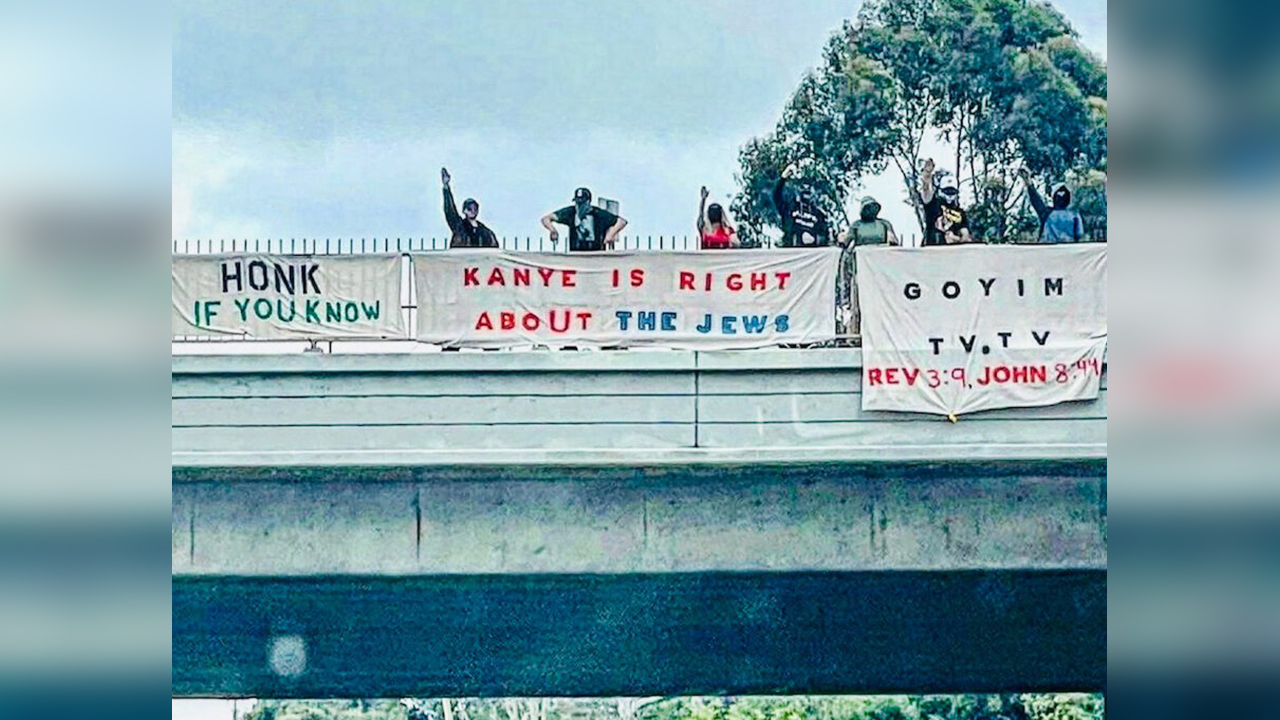