The final chapter of Isaac Bashevis Singer’s 1984 collection, “Stories for Children,” is titled “Are Children the Ultimate Literary Critics?” In this essay, Singer writes that children absorb literature with an open mind, yet they prefer that a story be clear and have a linear narrative. Children want to understand the characters’ motives, their context and the tensions they struggle with. And the story’s ending should logically follow from these elements.

Here is an example of such a story: A family decides to leave behind everything familiar and immigrates to a new country in hopes of a better life. By means of this sacrifice and some help from the Almighty, things work out well, and everyone lives happily ever after. There are some famous examples in this genre: Abraham left Haran for Canaan (at God’s command). Maimonides left Cordoba and ended up in Cairo (to escape persecution). A lesser known example is that of my father’s zayde, Yisroel Avrick, who left the Russian Empire for America in 1911 (to make money). In each case, the motives are clear and the endings good. The story is about the journey of leaving the problematic old place and going to a better new one. Immigrants must hope that the future will be better than the past.

The narrative arc of these stories is simple. It makes sense to children. The end is happy.

Until a few years ago, I told such a story about my own family. My wife and I settled in the Sunset District of San Francisco, climbed the academic ladder as physician-scientists at UCSF and enrolled our growing family in local Jewish schools. We were leaders in our Jewish community. We wanted to buy a house. And we intended to stay forever. We were thankful that great-grandfather Yisroel, an ardent Zionist, ended up in America and not Ottoman Palestine. This was the story I told my young children.

What surprised me — and surprised my kids, too — was that as we zoomed out, our stories became complicated and began to undermine the narrative of sacrifice begetting happiness:

“Papa, why do we live in San Francisco?”

“Because I got into medical school at UCSF and married your mother here.”

“But why do we live in America?”

“Because your ancestor Yisroel Avrick found work as a peddler and restaurant worker in Minnesota, and he stayed because even though it was difficult, Russia was worse. Two years after he arrived alone in the U.S., he wrote to his wife, Tuba, in Yiddish, ‘I have never written to you that America is a golden land. It is not even a silver country. It is just generally easier to make a living here than in Russia.’”

“But Papa, why did he live in Russia before he came to America?”

“Because the Roman general Titus destroyed the Temple in Jerusalem and exiled the Jewish people from Judea, and after many years our family ended up stuck in the Pale of Settlement in the Russian Empire. And from there they escaped to America.”

In the midst of telling these stories to my children, I realized that these were not stories of immigrants living happily ever after, but of continued wanderings, of our people’s ceaseless searching for home.

Last year, we became immigrants in hopes of a better life for our children. My wife and five kids and I left San Francisco for a small town in Israel that we had never visited before in our lives, and where we did not know a single person. Within a few months, we realized our wandering had finally come to an end. We were home.

“Papa, why did we move to Israel?”

“Well, during Covid we could work from anywhere, so we wanted to try somewhere new. And almost all of our religiously observant friends had already moved away from the Bay Area over the years to find stronger communities. We wanted to be around more young people who keep Shabbat and kashrut. And we thought the idea of sending the kids to an Israeli public school was intriguing. And as an observant Jew, I pray three times a day to return to Israel. And San Francisco has insane housing costs, failed politics, a propensity to natural disasters and the fear that Trump will come back to get us. And we came to Israel because it’s great for kids, and it is home.”

But is this the real story? Maybe my future descendants will tell another story, which will also, in its own way, be true.

“My grandfather turned 40 and in the throes of an existential crisis persuaded his skeptical wife to move the family to the hot, dry, violent Middle East. Because he read the story in the Torah about Abraham who did the same thing. And because the food was better in Israel. For that he gave up the good life that our family had in California. 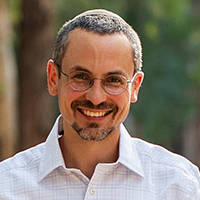 Dr. Jonathan Esensten, wife Dr. Raquel Gardner and their five children made aliyah from the Sunset District of San Francisco to Givat Shmuel, Israel, in August 2021.