The synagogue today | Welcome to our synagogue

Friday night at the oneg Shabbat: As old friends shmooze over decaf and the kids play on the parquet floor, one couple stands off in the corner, nibbling on cookies and looking lost.

They are the new temple members nobody knows, hoping for a friendly hello.

Every synagogue advertises itself as warm and welcoming. But how many fit the description?

Those data bear out what synagogue professionals already know: Affiliation is down significantly compared with past generations. “We need to be much more creative in our approach because people are not joining synagogues the way they used to,” noted Rabbi Corey Helfand of Peninsula Sinai Congregation, a Conservative synagogue in Foster City.

In order to survive, synagogues must work extra hard to enroll new members. And that means, at least in part, laying out an attractive welcome mat.

Fostering a welcoming atmosphere has always been high on the to-do list of synagogue professionals. As it turns out, many Bay Area congregations have taken steps to help new members feel like part of the family.

The congregation’s rabbi, Nathaniel Ezray, goes one step further. He holds a new members nosh at which participants form a circle and share “their Jewish stories.”

“A synagogue is a place where deep relationships and bonds are made,” Ezray said. “So if we can create connection through story, and institutionalize that, we create the formula for success.”

That’s why Beth Jacob, which has a roster of 470 families, hired Rebecca Schwartz 18 months ago to serve as engagement director. The new member mentorship was one of the first ideas she put into action. After asking a longtime congregant to serve as a mentor, however, she got a surprising response.

“He told me ‘When I got your message I thought you were calling to offer me a mentor, because I really don’t feel all that connected,’ ” Schwartz recalled. “That started a more in-depth look at the process.”

From there, clergy, staff and lay leaders met to figure out how to make  members feel more at home in their synagogue community.

“One of the goals was for each new member or family to know at least 10 other members by the end of 12 to 18 months,” Schwartz said. “Not just in passing, but really being able to say ‘I’ve gotten to know them.’ ”

Talia and Seth Perlman were among the first to be paired. The couple moved to Redwood City from San Francisco two years ago. The day they closed escrow on their new home they wandered into Beth Jacob for Friday night services. They liked what they saw.

“Synagogue life can get kind of cliquish,” said Talia Perlman, 34, who was pregnant with daughter Hannah at the time. “I didn’t feel that way here. They helped us immediately meet other young families in the area.”

After Hannah was born, the synagogue set up a meal train, with different congregants bringing hot meals every day to help out the new parents. Those congregants arrived as strangers but departed as friends.

Talia and Seth Perlman of Redwood City with baby Hannah.

Ezray acknowledges it can be “really hard to walk into a new place. If done thoughtfully, if you feel cared for, it makes for someone who is engaged in a meaningful way.”

At Peninsula Sinai Congregation, clergy and lay leaders take welcoming new members so seriously, they devised a flow chart for it.

The chart outlines steps to bring new members into the fold, starting with a conversation with a membership counselor and leading to welcome baskets, a mentor and invitations to participate at every level of synagogue life.

“What happens is [synagogues] focus so much on getting people in the door, once they’re here we don’t have a sense of what they want and need, or how to support them,” said Helfand. “I try to sell relationships first, and once those are deeply rooted, then we take the next step. It doesn’t pressure people with the immediate financial obligation. That’s a turnoff.”

Helfand’s synagogue sweetens the deal by offering a free first-year membership to young married couples. The rabbi knows policies such as this can be dicey propositions with synagogue boards that equate increased membership with fiscal stability. Helfand doesn’t buy into that thinking.

Peninsula Sinai now has 260 member families, a net increase of 60 families since Helfand came aboard in 2011.

Some of the congregation’s strategies to help new members feel like part of the family are remarkably simple, such as saying hello to new people who show up for services or other events.

“One reason [new members] came in the first place is they’re looking for community, but we don’t always know how to respond,” Helfand said. At services and social events, he said, “I try to have a good pulse on who is in the room at any given time. I walk around and say [to longtime members] ‘There’s a new member. Would you mind asking them to sit with you?’ ”

The sanctuary is one place where new members test the congregational waters. For others, it’s the preschool.

Liebman says she and her husband were seeking community, but wanted to be sure whichever congregation they joined would warmly embrace them as an interfaith couple.

They got what they wanted at Temple Sinai.

“I feel much more comfortable being part of a community where [intermarriage] is not a contradiction,” said the Central Valley native who grew up in a nominally Christian household. “I feel very at home there.”

Helping her was Lisa Hanauer, Temple Sinai’s membership and communications director. Hanauer met with the Liebmans, as she does with all new and prospective members, to determine their needs.

Whatever those needs — a Jewish education for the kids, Torah study, adult learning, holiday services — Hanauer believes the goal is always human connection.

“They can find an event or a lecture they might want to go to,” she said, “but that’s not what’s going to keep them. It’s connections with other people and clergy. That’s the difference between a community and a gym.”

Added Hanauer: “People tell me ‘We were shul shopping and nobody spoke with us. So we said if anybody talks to us at the oneg, that’s the litmus test, that would be a big selling point.’ ”

After her mother died earlier this year, Liebman got a sympathy call from Temple Sinai Rabbi Jacqueline Mates-Muchin, a gesture she greatly appreciated. Moreover, congregants helped out the grieving family by adding the Liebmans to a meal train.

“It was a genuine acknowledgement that when things are stressful, something’s got to give — and that’s usually a reasonable dinner,” Liebman said.

San Francisco Congregation B’nai Emunah, with 100 member families, is a “Cheers”-style shul, one where everyone knows your name. But a small community doesn’t necessarily make it easier for new arrivals to feel at ease.

Rabbi Mark Melamut gives every new member and prospective member of the Conservative shul a coupon, good for one coffee with the rabbi. Over the years Melamut has bought countless nonfat decaf lattes for curious shul-shoppers.

He also hosts new member dinners and brunches at his home.

“We try to make special efforts for newer members,” Melamut said. “If you’re looking for a synagogue where you can hide in the corner, this isn’t your place.”

Rabbi Yonatan Cohen of Berkeley’s Congregation Beth Israel takes the same approach. At 250 member families, CBI is one of the largest Modern Orthodox synagogues in the region, and one that takes pride in fostering a welcoming attitude.

Given the centrality of Shabbat to the Orthodox lifestyle, Cohen says that’s a good time to make newcomers feel comfortable.

“Any person who contacts the synagogue or sends an email seeking it, they immediately get a Shabbat meal invitation,” Cohen said. “We always have one family who hosts a Friday night dinner, and one who hosts a Shabbat lunch, so we’re always able to take the experience of the synagogue back into the home on the first encounter, to make a personal connection.”

Cohen said the collective vision for his shul is one of family.

Sarah Liebman with her twin boys

“That means you’re invested in peoples’ lives,” he said. “If that’s the overarching philsophy, then everything we do needs to be in line and attuned to that philosophy. How do we treat a family member?”

At Congregation Sha’ar Zahav, a 300-family San Francisco Reform synagogue with a large LGBT membership, the approach is all about outreach. A Torah study invitation from Rabbi Camille Angel, an organized buddy system and an annual new members dinner are a few of the welcoming strategies.

“If we get someone who has young kids, we match them with someone who also has kids in the school,” Bernstein said. “The goal is to establish connections and a relationship. People are members of a community because they feel connected to that community.”

Andrea Sobel is about to send out the welcome wagon once again. As co-chair of the membership committee at Peninsula Temple Sholom in Burlingame, she helps oversee the Reform synagogue’s commitment to making new members feel included.

According to Sobel, the principle under which she and her colleagues operate is one of creating a sukkat shalom — a shelter of peace.

“We are ambassadors,” she says of staff, clergy, lay leaders and fellow congregants. “We have great mechanisms in place to help people not get lost. They really help people get past that awkward moment of being new on campus.”

In place for several years, Sholmates is PTS’ spin on the mentor programs of other synagogues, in which new members are matched with established members who share similar interests. With 2,000 congregants, PTS has quite a pool from which to draw.

It starts with the new members listing their personal interests (such as social action, early childhood education, Torah study), followed up by Sobel’s email introduction between a new and a longstanding member.

After the pen-pal stage, the Sholmates go to the next step: socializing together at oneg Shabbats or other synagogue functions. Then comes engaging in deeper connecting activities, such as PTS’ Kolot initiative, which features small group discussions led by Rabbi Daniel Feder.

“At the first [Kolot meeting] we asked the question: ‘What does community mean to you?’” Sobel recalled.

The meeting was, she said, a great success.  “It brought together strangers and ended up with people hugging goodbye.”

The more hugs the better. According to synagogue professionals, sealing those person-to-person bonds early on means more committed — not to mention larger — congregations.

Said Peninsula Sinai’s Helfand, “Instead of getting more people to join, let’s invest in the people, and hopefully in turn they will invest in us.” 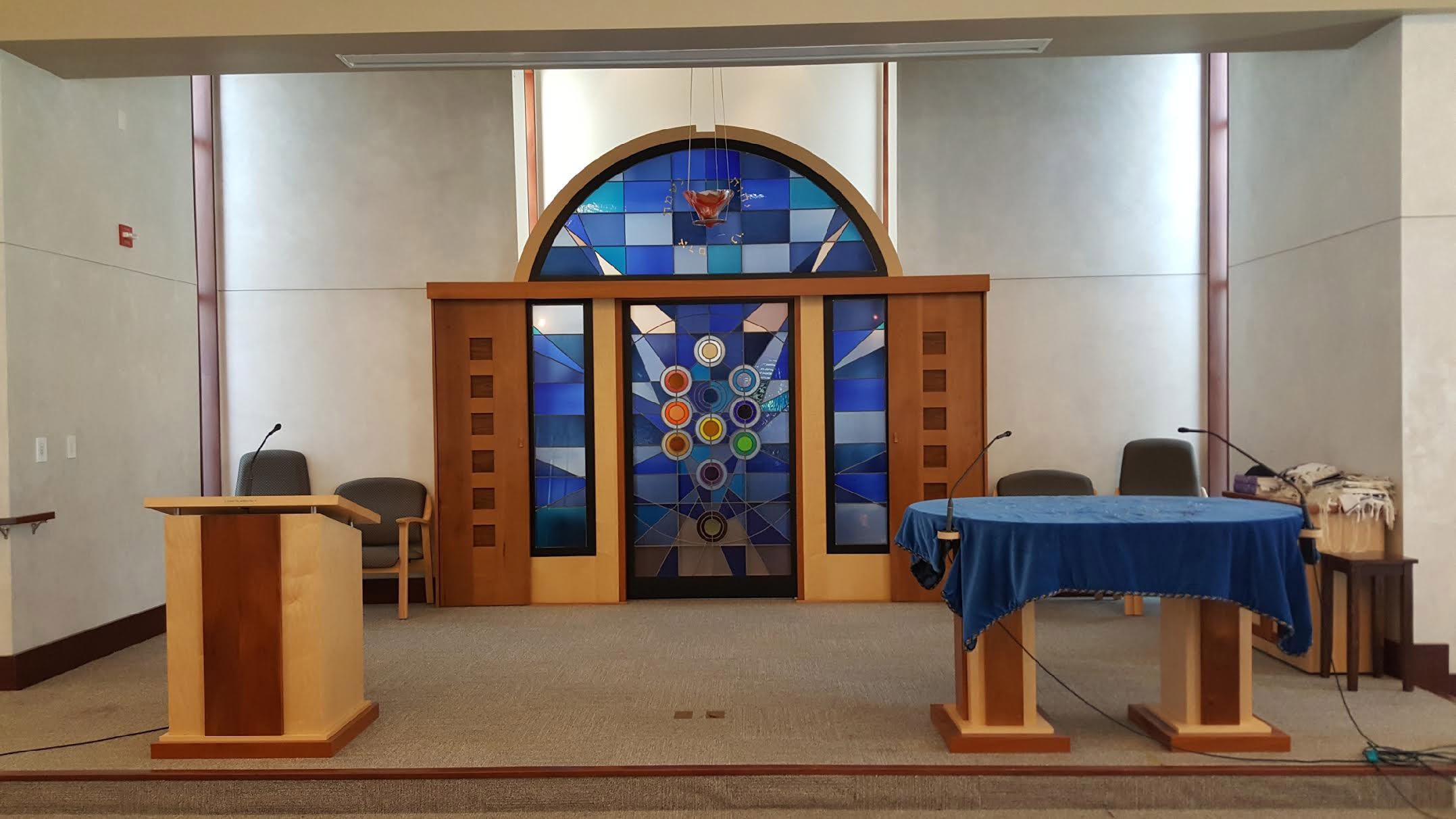