By Ari’s count, this pregnancy is her 17th attempt to have a child.

When she and her husband, Jesse, got married in 2008, the Berkeley couple (who asked that their last names not be used to protect their professional privacy) started trying to have children right away. Ari was 36 and Jesse was 33. After six months, they consulted fertility specialists, who diagnosed Ari with a uterine abnormality.

She eventually underwent a series of invasive procedures: intrauterine insemination, fertility stimulation drugs, in-vitro fertilization, and IVF with a donor egg. Ari got pregnant and had miscarriages. At one point, the couple took a break from the fertility treatments, and Ari got pregnant naturally. She carried that pregnancy for 21 weeks, nearly to the point of viability, before losing it. She had to go into labor to deliver her stillborn infant.

“If you’re a young woman, and you step into the synagogue and someone says, ‘When are you having children?’ that question can make me cry in the bathroom,” said Ari, who has been supported by Rabbi Yonatan Cohen at Congregation Beth Israel in Berkeley during her infertility struggles.

Dealing with infertility can be isolating. Many couples suffer disappointments and losses in private even as they attend brit milahs, baby namings and birthday parties for the children of their friends and family members. But a new organization based in Berkeley is providing support for couples like Ari and Jesse that is rare in the Jewish community.

Hasidah, or “stork” in Hebrew, is a nonprofit that helps connect Jewish couples to infertility resources and also provides financial grants to pay for fertility treatments — one of the few Jewish organizations in the country to do so.

Hasidah is also trying to change the way infertility is perceived, so it becomes a core communal concern in the Jewish community. The aim, according to Hasidah founder Rabbi Idit Solomon, is to build Jewish families.

The idea came to Solomon after she became pregnant with her twin daughters, who are now almost 3. The pregnancy was hard-won; Solomon underwent fertility treatments for three years before she conceived her girls with a donor egg.

“We started with decent insurance coverage; we ended with no insurance coverage,” said Solomon, 44. She and her husband spent more than $100,000 on fertility treatments. “You feel like you have one arm giving blood and one arm holding out your credit card.”

Solomon was working in Ohio as the vice president of education for the Jewish Federation of Columbus when her children were born; her agency was giving grants to send Jewish kids to summer camp and Israel and to stock kids’ libraries with Jewish books. The way she saw it, all that money was being spent to nurture Jewish children and build Jewish families; why shouldn’t the Jewish community also assist couples trying to have Jewish babies?

“The statistics say our numbers are declining,” said Solomon, referring to population studies of the U.S. Jewish community. “We’re shrinking; that’s a fact.”

The American Jewish community’s birthrate, 1.9 births per woman, is slightly below the replacement level of 2.1. The causes aren’t clear, but Solomon points to the fact that a disproportionate number of Jews attain high levels of education, which correlates with lower birthrates as women put off having children until they’re settled in their careers.

Solomon and her husband announced the creation of Hasidah at their daughters’ naming ceremony in 2012; they wanted to help other couples going through what they had experienced. In 2013, Solomon quit her job to work on Hasidah full time as the founder and CEO. Last summer, her husband accepted a position on the law school faculty at U.C. Berkeley; the family moved to the Bay Area and Solomon brought Hasidah with her.

Solomon is Hasidah’s sole employee. Though the organization is 2 years old, it’s still getting established on the West Coast. Funding for Hasidah currently comes from private donors, but Solomon is applying for foundation grants. Couples find Hasidah through networking and online searches, and Solomon helps connect them with resources such as counseling, genetic screening and spiritual care. Hasidah has also just started giving direct monetary grants for fertility treatments.

Ari and Jesse are applying to Hasidah for a grant to cover part of the costs they have incurred from fertility treatments — $150,000 to date. At one point, the couple moved in with Jesse’s parents for 21⁄2 years to be able to afford treatments.

“It’s astronomical what you have to pay,” Ari said.

Couples pay an average of $24,000 for each IVF treatment, according to information gathered by Hasidah, and more than one treatment may be necessary. And unlike many large family expenditures, cash is typically expected up front — many insurance policies don’t cover advanced fertility treatments, and fertility clinics, unlike car dealerships, don’t offer financing.

Even families with good incomes might not be able to afford treatment without depleting their savings, Solomon said. That’s the case for one couple in Columbus, Ohio, who are facing not only secondary infertility but genetic challenges as well. After their first son was born, they discovered that the father has a rare and potentially deadly genetic heart condition. Though the first son didn’t inherit the gene, there’s a 50 percent chance another child would.

“We’re both professionals, we know we have savings, but if we use this to do IVF and PGD [preimplantation genetic diagnosis], we might not have our savings for more medical expenses for my husband,” said the mother, Miranda, 33, who also asked that her full name not be used. Her medical providers are creating a genetic test to screen for the heart condition; once it’s in place, she’ll have IVF treatment. Hasidah will contribute more than $10,000 for the treatment in the organization’s first direct grant.

A handful of other families have applied for Hasidah grants. Each application is screened by volunteer medical professionals to make sure fertility treatment has a reasonable likelihood of success; a committee that includes a social worker and a Jewish communal professional also looks at the applicants’ responses regarding financial stability and how they envision building a Jewish family. Solomon said she is open to helping anyone who is interested in creating a Jewish family — regardless of sexual orientation, marital status or if only one partner is Jewish.

Hasidah is unique in its scope. Only a handful of Jewish organizations around the country provide emotional and financial support for infertility, Solomon said. An international agency, Bonei Olam, offers significant financial assistance for fertility treatments but is aimed at members of the Orthodox community. Hasidah, she said, serves the entire Jewish community and is committed to developing a network of support. “We build awareness, and we also have goals for change.”

After Ari delivered her stillborn baby, Beth Israel’s rabbi arranged for a funeral, burial and grief counseling and encouraged the couple to seek community support.

“When our baby died, he created this whole ritual around the loss knowing that there are no rituals around stillbirths,” Ari said. “He normalized it.”

Cohen is part of a small group of rabbis Solomon has recruited to be Hasidah’s rabbinic partners. They have agreed to raise awareness about infertility by mentioning it during premarital counseling, in baby naming ceremonies, in social media posts and from the bimah. So far, 30 rabbis have joined the growing network, a third of them from the Bay Area. The hope is to increase support for couples while erasing the invisibility that often accompanies infertility. In partnership with the Board of Rabbis of Northern California, which represents more than 200 rabbis in all denominations, Hasidah will hold a Bay Area training later this year addressing infertility from medical and emotional points of view.

Pressure is everywhere. Blessings in the daily prayerbook, along with the numerous lifecycle celebrations in Jewish life, “offer subtle and at times not-so-subtle messages” that having children is expected,” noted Cohen. “Most people don’t imagine that they’re going to be the couple that struggles with this.”

“If you’re an infertile woman, everyone around you is having babies,” said Rabbi Chai Levy of Tiburon Congregation Kol Shofar, a Hasidah rabbinic partner who herself faced infertility. She said the many biblical stories about women and infertility can be comforting.

“It makes a Jewish infertile woman feel like her  own personal struggle and her own personal story is part of the Jewish story. That takes away some of the isolation, I think,” Levy said. “The hard part is that in the Torah, all the women eventually get their children, and it doesn’t always work out that way in real life.”

Ari and Jesse are still waiting for their child. After another natural pregnancy and miscarriage, doctors advised Ari not to get pregnant again, largely due to the emotional toll it was taking on her. The couple contracted with a surrogate to carry their child conceived with a donor egg. She miscarried. “One of our doctors said, ‘You have a case of the worst luck I’ve ever seen in my entire career,’” Ari said.

Now Ari and Jesse are expecting again; their surrogate is 11 weeks pregnant. But Ari is trying to keep her hopes in check.

“You don’t even get to the point of thinking about what it would be like to have a child because that is too hard to think about it,” Ari said. “We don’t allow ourselves to think about those things.” 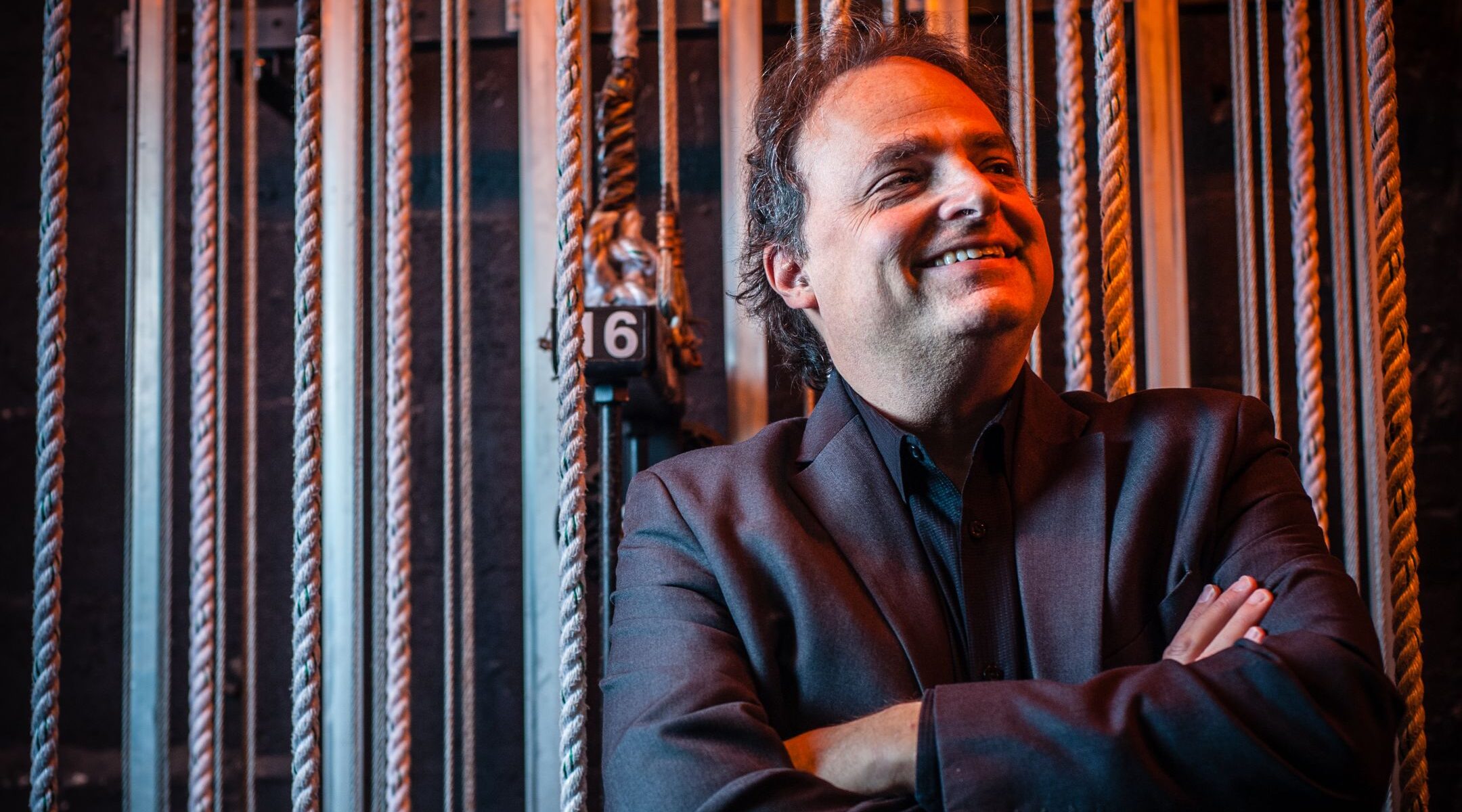