Q&A: A purveyor of an ancient technology

J.: You and storyteller Joel ben Izzy co-founded a company that teaches organizations and their leaders how to translate their message into memorable stories. What inspired you, and how did you get started?

Jay Golden: As social media continued to expand, I realized there was something at the center of all of it: storytelling. That doesn’t mean your message, your video or your website. Storytelling is that broader thing — when you say it, or write it or animate it — that’s going to be alive in people’s hearts and minds tomorrow. It’s retellable. So I dedicated myself to helping people understand how stories work and how to use them in their leadership and in their companies.

So, how do stories work?

One definition of a story is a problem approached in an interesting way that makes us care. And the hard part is really to make people care. You can’t do it by drowning them in data. By some accounts, we get up to 5,000 ads a day thrown at us, and that doesn’t even count emails, tweets, Facebook posts and conversations. Our real question is, how can we leverage this ancient technology of story to help people convey their most essential messages so they can be remembered tomorrow?

By teaching people to tell stories, you say you’re helping them make use of an age-old form of media. You came from a 12-year career in online media. How do you think the web and social media have influenced how we tell stories today?

Storytelling has become more democratized. People are more ready to become storytellers than ever before, because so many people are sharing so much information informally and publicly.

Your clients include major companies like Facebook and LinkedIn and nonprofits like the Rainforest Action Network. How do you go about teaching them to tell stories?

Part of it is understanding what story needs they have. If it’s a high-level leader, it may be that they’re looking for some key stories that will be remembered the next day. When it comes to companies, they usually tell three different kinds of stories: origin stories, which is where they come from; impact stories, which is what they do; or vision stories, which is how they want to see the world different.

What are the elements of a good story?

The most basic thing we’re looking for is change. If there’s no change, there’s no story. You also don’t want to give away the message at the beginning, but actually draw us into a trial, into a human challenge, and overcome that challenge and come out on the other side.

What is your Jewish background?

I would say it’s Reform and secular. I was bar mitzvahed and then I guess I had enough of having information stuffed into my brain. It wasn’t until I became a traveler after college that I opened up to the wisdom of some of the ancient practices. It was actually the great mythologist Joseph Campbell who helped me. He basically said, “Look, dance with the one that brung you.” The ancient traditions have many similar teachings, so if you connect with the one that feels the most familiar, you’ll be more able to go deeply into it.

How has the tradition of Jewish storytelling influenced you?

The idea of telling Jewish stories did not come easy to me. But I just listened more and more. To do that was to look at my own neighborhood, at some of the rich tradition of Jewish storytelling, and see some of the magic that’s there. Some of my favorites, which I was just listening to with my kids, are the stories of Chelm, which come from Isaac Bashevis Singer.

I had a great-grandfather who was known to be the wise man of his village outside Minsk; my aunt has a picture of him on the wall. And sometimes I think about that. I think that my path to study stories and help people to find theirs may not be all too different from his work of people knocking on his door and asking for his advice. I like to think that I’m following in his footsteps, or that I am perhaps a student of the ancient ways. 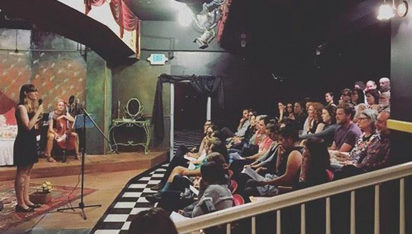