Rabbi Yosef Langer strolls down Sixth Street in San Francisco’s South-of-Market neighborhood like a politician on the campaign trail, stopping to shmooze with people along the way.

One of those was Marvin, who was slouched up against the wall at Sixth and Natoma streets. (He has a severe drinking problem, the rabbi later confided.) As the two chatted, Langer told the man it was his birthday. Marvin dug out his ID to prove it was his, too, prompting Langer to lead a bewildered group of passersby in a rendition of “Happy Birthday” before handing the guy a few bucks as a birthday present.

This kind of encounter is why Langer believes it’s important to have a Chabad branch in the neighborhood. He likened it to the Ba’al Shem Tov — the 18th-century founder of Hasidic Judaism — walking out of his synagogue to talk to people in the marketplace.

“He would just ask people, ‘How are you today?’ And I’m finding that’s just my M.O. down here, right now,” Langer said.

This area of Sixth Street between Harrison and Market is a neighborhood that is transforming, albeit slowly. A massive residential development is under construction nearby on Howard Street. A luxury mall is nearing its opening day on Market. Tech firms have begun to sprout up in the area. At the corner of Sixth and Natoma, there’s Positively 6th Street, Langer’s new Chabad community center — right across the street from Frena, the city’s only kosher bakery.

The 4,500-square-foot center, which held its first Shabbat service last November, recently completed a $200,000 remodel. There’s a space for services, which doubles as an event space; a kosher kitchen; and a makeshift lounge. But construction is far from complete.

“The first phase, which is what you see here, is still very premature,” Langer said during a recent tour of the center, though it already offers basic Jewish programming, including Shabbat and holiday services and a daily morning minyan.

To realize the vision in its entirety, Langer will have to raise more than $1 million. He’s confident he’ll be able to do that — already, this week, San Francisco’s Koret Foundation has agreed to give Langer’s effort $200,000 to fund capital improvements.

“It’s an interesting idea in an interesting part of town,” said senior program officer Danielle Foreman. “Koret really likes the project. It’s a new region in the city to expand to, and support a new project that will help bring Jews into the Jewish community. The hope is that other funders see the value of the project and get on board.”

With his long white beard and motorcycle — his mitzvah-mo-bike, he calls it — Langer is a well-known, easily recognizable figure in the Jewish community. An Oakland native, he acknowledges he is a product of the ’60s counterculture, dropping out of college in 1969 and serving as a merchant mariner before finding religion and becoming a follower of the Lubavitch movement. In 1975 he and his wife, Hinda Yehudis, were sent to the nascent Berkeley Chabad center as assistant emissaries; four years later they became the movement’s Bay Area directors.

Over the years he has run a variety of high-profile Jewish events, notably the annual lighting of a 22-foot-tall Hanukkah menorah in Union Square. He does a Jewish-themed cable car tour, and since 2001 has produced a Jewish music festival dubbed Purimpalooza. In 2007, he blew the shofar at AT&T Park’s Jewish Heritage Night and “Rally Rabbi” bobbleheads of Langer were given out as souvenirs (you can pick one up on eBay for as much as $250, depending on the day).

Given Langer’s history, it’s no wonder he opened Positively 6th Street in the SoMa area. Not only is it colorful, it’s filling up with young Jews working in the tech industry — and that’s his target audience, through the center’s Young Jewish Professionals program, run by Rabbi Shmulik and Tzippy Friedman.

“We create a community for young Jewish professionals, and we have many events, such as networking, classes, lunch and learns, and speakers,” Tzippy Friedman said.

Last week the Friedmans ran the center’s first Passover seder, similar to the many other Chabad seders run throughout the Bay Area. “It’s always a wonderful, comfortable atmosphere,” she said. “We drink a lot of wine and socialize and bring Judaism back to life in a comfortable, nonpressurizing way.”

The center’s signature event is a monthly Friday night happy hour, followed by Shabbat services. Boasting an open bar and hors d’oeuvres, the SoMa Shul event aims to draw a diverse crowd that might not otherwise attend religious services. “A Shabbos happy hour with music — when the clock allows it,” Langer said, referring to the Orthodox prohibition on playing music on Shabbat.

Other types of programming by necessity take place offsite. Weddings, bar mitzvahs, holiday meals and services — some are too big to fit inside the center, and have to be held in hotels. “Yom Kippur drew more than 400 people, which we couldn’t fit in the center,” he said “Part of what I’m focusing on developing is programming beyond the walls, the bricks and mortar. Much will exist beyond the physical space.”

In addition to appealing to young Jews living in the neighborhood, Langer also sees the new center as serving Jewish visitors to the city.

“There are a lot of traditional people who come from Israel, from Europe, from other parts of the world that have bypassed San Francisco because of no Shabbos hospitality downtown amid the hotels and the business community,” Langer said. “I want to have a place for the tourists and conventioneers.”

With a 15-year lease, and an option to add five more, Langer said they have big plans to improve the community space and conduct outreach in the gritty but increasingly vibrant neighborhood. “We want to build it out more, and warm it up more,” Langer said. “I’m working with the Gene Friend Recreation Center to set up a monthly matzah ball soup kitchen to feed the neighborhood.”

To brighten the streets, Langer said murals on the alley-side of the building will rotate with the holidays. He also envisions a basement-level mikvah, which would be one of only a few in the city. “We’ll hopefully have a steam room with aroma therapy,” added Rabbi Moshe Langer, Yosef’s son.

Chabad has certainly planted its flag in SoMa.

“We want to make Jews proud to be in this neighborhood,” Langer said. “Proud and safe and happy, and since we’re new kids on the block, we want to transmit that to our neighbors on Sixth Street, to the community.” 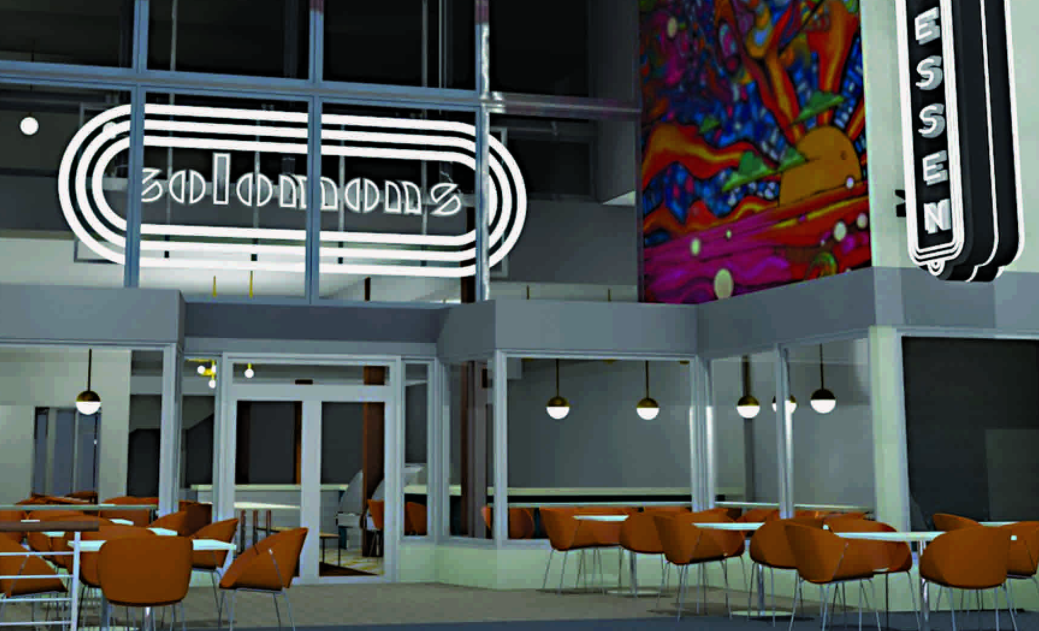