I recently saw one of the most unnerving things I’ve ever seen in my life.

The largest cemetery in Europe — with more than 350,000 graves — was the Jewish cemetery in Thessaloniki, Greece, the epicenter of the Greek Jewish community and the preeminent location of Sephardic life after the Inquisition. The cemetery was destroyed by the Greeks after the Nazis invaded in 1942 and the marble tombstones were then used to pave sidewalks, build walls, homes, buildings and even swimming pools. So much marble flooded the market that the cost of marble went down to almost nothing.

I was in Thessaloniki recently, traveling through Greece with 16 relatives on my wife’s side to investigate her family roots; my father-in-law’s parents were born in the city.

Eight adults and eight kids spent more than two weeks touring the country and learning the history of the Greek Jews. In our investigation into the family roots, we learned that a tombstone of a member of the Alcheck family might be built into a wall in a particular neighborhood. So we drove there — the Thessaloniki suburb of Panorama, an upscale neighborhood with beautiful three-story villas.

We quickly noticed that all the walls were made of plaster, or another material that was plastered-over. When we pulled onto Xrysanthum Street, we couldn’t find No. 2, our sought-after destination. We asked at a local corner store and an old Greek woman pointed a few houses down.

We walked down the block and as we approached, a couple of dogs began barking, as if to warn us not to come any closer. Finally we arrived, and through the iron fence we saw the house and felt a sense of disappointment as we spotted the blue No. 2 tacked onto pink, plastered walls.

The dogs barked even louder and I was glad an iron fence separated us. The noise brought a very large man out of the villa, who waddled over and greeted us amicably through the gate. Our guide explained in Greek what we were looking for, and we waited with anticipation to see how our large friend would react. Would he respond like so many of the locals did upon the return of Jews to European cities after the Shoah, suspiciously denying everything?

Finally he smiled, nodded his head and pointed down. We looked down at the short wall sprouting up from the sidewalk, into which the iron fence was mounted. My breath caught in my throat; I saw the tombstones.

Dozens and dozens of them were built right into the two-foot wall. The Hebrew letters going right to left, down to up, diagonally. Pieces of words. Fragments of sentences. Broken images. Memories of a forgotten time. We snapped photo after photo, as if by capturing the images we could re-sanctify these names, make these lives holy again.

The woman who owns the house came out and greeted us warmly. She let us into her yard and showed us the other side of the wall. More tombstones. She walked us around the side of her yard to a larger wall, 4 feet high, and we saw even more tombstones.

She explained that she moved into this house three years ago after her father passed away. She said he built the home like all the others did in this neighborhood, from whatever materials were available to them at the time.

It’s clear that this was an entire neighborhood built with Jewish tombstones.

I have seen defaced, graffiti-riddled and even smashed tombstones. But this is something I had never seen before: Willingly using the tombstones of the dead to build a home for your family is something I can’t fathom. When we asked, they told us they never really noticed the markings until a few years ago when people came and pointed them out.

I wanted to believe them. I really did. But I couldn’t. As we left, we thanked them. And they smiled and waved to us. 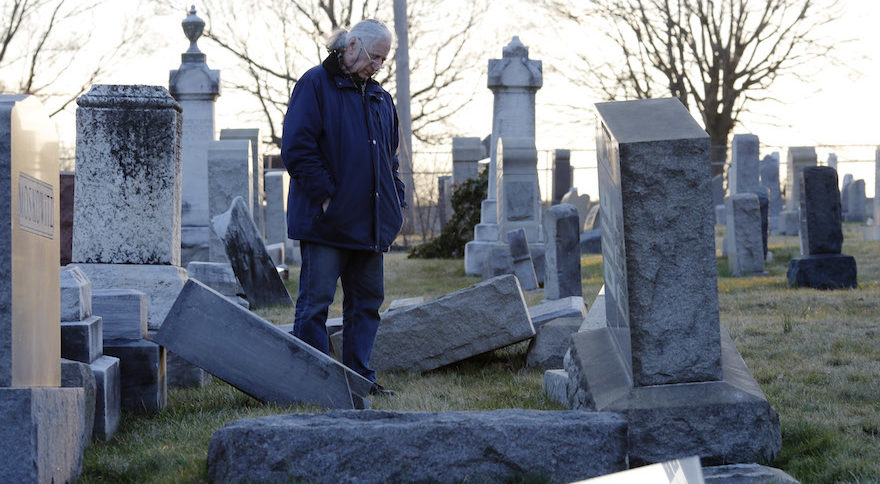