Bay Area rabbis, political and community leaders are among 200 Jewish individuals and organizations across North America condemning the Israeli government’s “callousness and ignorance” in making it harder for same-sex couples to adopt children.

The public letter released on July 25 was organized by A Wider Bridge, the San Francisco-based organization that supports the LGBT community in Israel. Signatories included Hillel International, leaders of the Central Conference of American Rabbis, the Union of Reform Judaism, prominent Jewish LGBT leaders and over 60 U.S. rabbis.

The letter was in response to an Israeli government document submitted to the High Court of Justice in mid-July saying it would not eliminate procedures that reduce the adoption chances for gay couples. The document argued that same-sex families are “irregular” and create “added baggage for the children.”

Though same-sex families legally are able to adopt in Israel, the public letter said, the government “puts their applications at the bottom of the pile, and they are only allowed to adopt a child if no willing heterosexual parents can be found. There have been no more than a handful of instances in the past decade of adoption in Israel by same-sex families.”

Thousands of people protested in Tel Aviv last week against the government’s policy, noting that the LGBTQ community receives public benefits and serves openly in the Israeli military.

The letter calls on the Israeli government to treat same-sex couples with equality in the adoption process, saying the current policy has created a “crisis of family” and pointing out that adoption by gay parents is legal in all 50 U.S. states.

“I think the letter reflects the extent to which LGBT equality has become a core issue for many pluralistic, non-Orthodox Jewish communities in America,” said Arthur Slepian, founder and executive director of A Wider Bridge.

“At a time when the Orthodox and Haredi leaders of Israel are talking about the priority of Jewish continuity, here is an example of part of the Israeli community that is saying, ‘We want to be part of that project. We want to raise children and have families and contribute to the strength of Israeli society. Don’t shut us out of that process by treating us as second-class citizens.’ ” 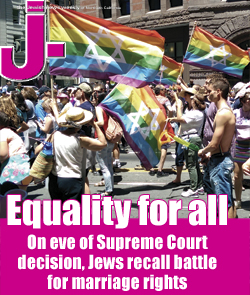