The year Doris Sperber was born in Brooklyn, New York, Roosevelt was president of the United States. Not Franklin. Teddy.

Doris was an eyewitness to two world wars, the Great Depression and the invention of television in 1927. Over the course of nearly the entire 20th century, she and her husband raised four sons, built a business, volunteered in their Jewish community and ended up embodying the American dream.

On Jan. 18, the Jewish Home of San Francisco, where she has lived for the last 13 years, threw Doris a 110th birthday party. She is, safe to say, the oldest Jew in the Bay Area, and probably in California.

Three of her four sons were on hand for the special event. Though her actual birthday is Jan. 28, 1908, the celebration took place at a once-a-month birthday party for residents at the Jewish Home (newly redubbed the Jewish Home and Rehab Center, which is located on what is now called the San Francisco Campus for Jewish Living).

Doris is in a wheelchair these days, and she struggles with some dementia. Her son Stephen said “she goes in and out.”

That doesn’t stop her from living. Since moving to the Bay Area in 2000 with her husband Reuben (who passed away at 100 a few years ago), she has been a member of Congregation Sherith Israel in San Francisco and even had her adult bat mitzvah there.

“She told me when I was growing up that bar mitzvahs were only for boys,” Stephen recalled, “and that girls deserved equal rights. She always wanted women to be recognized as full-fledged members of the community.”

Doris’ party at the Jewish Home featured a splendid violin soloist who approached Doris and played “My Yiddishe Mama” especially for her, eliciting a smile.

Stephen said that though his mother grew up the daughter of two Yiddish-speaking immigrants from Poland, Doris never picked up the language of the Old Country. She was an American girl all the way.

While young, Dora Jablonsky worked in her parents’ tailor shop in Brooklyn’s Boro Park neighborhood. She was born so long ago, Henry Ford had not yet built his first Model-T. She played piano and loved to dance. Soon after she married, Doris worked for New York Social Services for a time before settling in as a mother, homemaker and assistant in her husband’s accounting practice.

The couple sent their sons to a local yeshiva, while Doris became active with Hadassah, an organization she worked with for decades, including when the couple later retired to Florida, where they lived for 30 years.

“She was socially aware,” Stephen said, “always for the underdog. She was the mother bird who took care of the little birds that fell out of the nest.”

Doris and Reuben loved to swing dance and travel, especially after their sons had grown. The couple was married for more than 75 years.

Once the birthday cake was wheeled out, Doris had the honor of cutting it, with some help. It had been a whirlwind of a day, and at times it appeared she was nodding out.

But when Rabbi Sheldon Marder of the Jewish Home led everyone in the Shehecheyanu blessing, Doris was alert and singing along: “Blessed are you, God, for giving us life, sustaining us and enabling us to reach this season.”

Congregation Sherith Israel will host a birthday celebration for Doris Sperber on Sat., Jan. 27 at a special Shabbat morning service starting at 10:30 a.m. 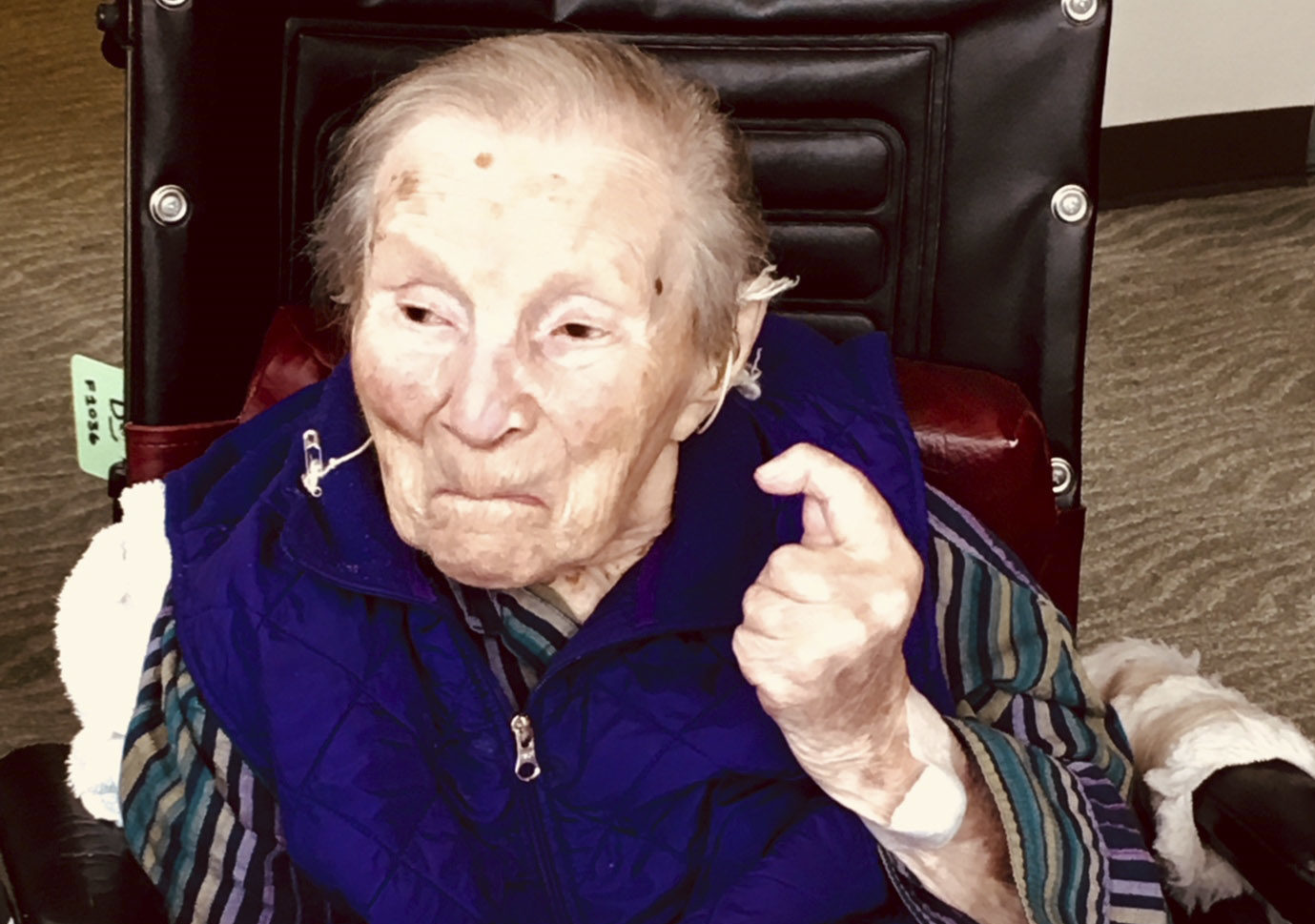