David Hermele did his 11th annual Latkepalooza event Monday, Dec. 10, raising over $7,000 for the victims of November’s devastating Camp Fire in Butte County.

The Berkeley resident, who is a practitioner of chi nei tsang (a Chinese form of healing massage), wilderness guide and self-described “traveler and adventurer,” started the latke party in 2008 in his studio in San Francisco and then brought it to Berkeley when he moved nine years ago.

“I’ve got a mission to build community and fry potatoes and share laughs,” he said. “I’m not superreligious, but when it comes to frying potatoes or making matzah balls, I’m in.”

The event has grown each year. Last year Hermele went through 150 pounds of potatoes, making the latkes in two deep-fryers in his backyard. It’s always been a potluck affair, with friends and neighbors contributing toppings or beverages. But this year Hermele upped his game in a big way.

He was talking not too long ago with his friend Amy Murray, chef-owner of the popular Berkeley restaurant Revival Bar + Kitchen, who not only offered her restaurant as a venue and her skills as a chef, but also suggested making it a fundraiser for Camp Fire victims in Paradise and other communities.

When it comes to frying potatoes or making matzah balls, I’m in.

“Eating potatoes and having a great time always makes me happy, but if we can celebrate that light and send some of it up to the people who are really not far from us and completely devastated, that [act of service] would make me happy,” Hermele said.

Hermele is quite particular about how he likes his latkes, recalling the ones he grew up on at Congregation B’nai Jeshurun in Short Hills, New Jersey.

“These associations of foods we ate when we were little are so powerful,” he said. “I like a nice balance between really crispy, but soft inside.”

Murray took on the vegan latkes, as well as house-made applesauce, but Hermele insisted he would do all of the standard potato latkes himself.

All proceeds from ticket sales, as well as sales of wine, beer and cocktails, will go to the nonprofit North Valley Community Foundation’s fire relief fund. Leftover food was donated to the homeless.

Speaking days before the event, which included comedy, exotic dance, beatboxing and other entertainment, Hermele said, “I’m excited to fry more latkes than I’ve ever fried before. I’ll cook them all day, and this year we’ll have more help than usual, but it will be a real treat to have a professional kitchen to do it in and not have my extension cords and deep-fryers everywhere.” 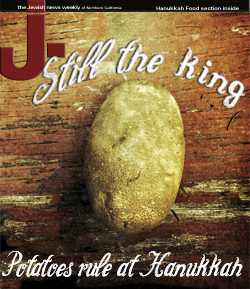