Wearing an ankle monitor, Sindy Flores, a recent immigrant from Honduras, stood before an interfaith crowd of protesters outside the U.S. Immigration and Customs Enforcement field office in downtown San Francisco to tell her story.

Holding her toddler Gretchshell, Flores said that border patrol agents had separated the child from her father when he tried to cross into the United States. For a month, the girl was placed with a family Flores never met.

“When they returned her to me a month later, she was an entirely different child,” Flores said.

Her story was just one account of government detention, dehumanization and violence shared by eyewitnesses at the protest on Friday morning. The event also featured testimony from 97-year-old Holocaust survivor Ben Stern and a Japanese American woman interned during World War II.

The protest was organized by the Interfaith Movement for Human Integrity, Bend the Arc Jewish Action, Tsuru for Solidarity, and the Japanese American Religious Federation. The action, one in a monthly series organized by the Interfaith Movement, was convened to oppose current U.S. government immigrant enforcement policies and demand “the closing of all detention centers” on the border and the “release of all people to their families.”

It was the latest in a string of Jewish-led or Jewish-affiliated protests against ICE policies in recent months. A week ago, the Jewish organization Never Again Action led hundreds down Market Street, looking to “shut down” the district office of Nancy Pelosi and voicing disappointment over the passage of a $4.6 billion spending package that included over $200 million for ICE. Since June 30, more than 100 Jewish protesters with Never Again Action have been arrested in demonstrations in New Jersey, Rhode Island, Philadelphia and elsewhere.

Friday’s protest, attended by about 80 people, was a prelude to an evening of global action. Lights for Liberty has planned hundreds of vigils Friday night in every U.S. state plus Japan, Italy and Israel — including about 20 locations in the Bay Area. The organization hopes its “vigil to end concentration camps” will bring thousands out all over the world “to protest the inhumane conditions faced by migrants.”

Stern, who lives in Berkeley, gripped the microphone with two hands as he told of the horrors he witnessed. Stern survived multiple concentration camps and a deadly forced march from Buchenwald. His parents and eight siblings were all killed by the Nazis.

“I was picked out and put in a cattle car, and my mother and brother were put in a different cattle car. We never saw each other again,” he said. “It was so heartbreaking I didn’t have a chance to cry.”

Stern was liberated by the U.S. Army in 1945 and would later immigrate to the United States. He was filled with gratitude when he finally saw the Statue of Liberty.

In 2017, Stern led a protest against a white supremacist rally in Berkeley, and now he is advocating on behalf of refugees. He said he was appalled by a recent New York Times report that immigration authorities would be conducting raids on Sunday.

“How could this happen in this great country of ours?”

The protest outside the hulking U.S. government building on Sansome Street lasted about an hour. A number of federal offices are housed there, including ICE and the field offices of the U.S. Customs and Border Protection. Rabbi Jeremy Sher of Bend the Arc said protesters were gathered “in the shadow of a building where evil is done.”

In an impassioned speech that included a reading of the Emma Lazarus poem “The New Colossus,” Sher said, “We [Jews] have been the wretched refuse of other shores. It doesn’t matter who the enemy is to Donald Trump and his bigot brigade. It could be any of us.”

The event was emceed by Gala King, a Methodist and a community organizer with the Oakland-based Interfaith Movement. A number of Jewish community leaders attended, including Rabbi Mychal Copeland of Sha’ar Zahav and Rabbi Dev Noily of Kehilla Community Synagogue.

Chizu Omori, wearing a necklace made of origami cranes, a Japanese symbol of good fortune and health, told how at age 12 she was sent with her family to the Poston War Relocation Center, an internment camp in southwestern Arizona. Omori was born in Southern California, where she grew up on a strawberry farm.

“They had to demonize us as inscrutable, suspicious people who couldn’t be trusted,” she said. “We were potential ‘saboteurs’ and ‘spies.’

“If you think about it, it’s so absurd,” she said. “Why were women and children considered potential saboteurs? But that was their rationale.”

Omori, a freelance journalist, founded Tsuru for Solidarity to show support for migrants. Tsuru held an origami-folding session in the Presidio in March as part of an effort to send 1,000 cranes to the South Texas Family Residential Center. The protest is organized by Japanese-Peruvian and Japanese-American incarceration survivors. Tsuru is the Japanese word for crane.

“We didn’t have anyone stand up for us,” Omori said. “So now we’re standing up for them.” 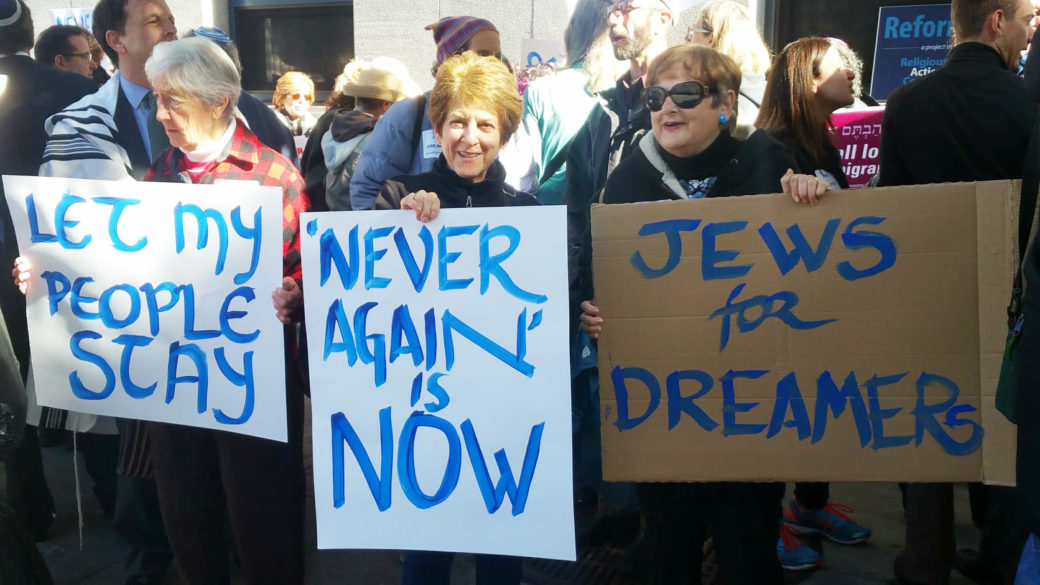