When Morgan Blum Schneider started working at Jewish Family and Children’s Services’ Holocaust Center 14 years ago, the speakers’ bureau had more than 40 Holocaust survivors on its list of available lecturers. Today there are only 17.

“I deal with this on a day-to-day basis,” said Blum Schneider, director of the San Francisco center. “I attend more memorial services every year.”

Kristallnacht was nearly 82 years ago. The Kindertransport ended 80 years ago. The liberation of Auschwitz and other concentration camps was 75 years ago. Every year there are fewer people who can remember and testify to the horrors of the Holocaust. And with every person lost, the living testimony disappears, too.

With International Holocaust Remembrance Day taking place on Jan. 27, J. is devoting the year ahead to profiling the Holocaust survivors, refugees and partisans in our community. We will listen to their stories firsthand — of life and death, escape and capture, love and loss. And we will share their tales — of trekking through the Alps, hiding in holes in the ground in the countryside, surviving forced marches, being hidden as children, escaping to Shanghai and ultimately coming out on the other side.

In doing so, our goal is to honor these survivors, celebrate their lives and their strengths, and record their stories in perpetuity.

“When we learn about the Holocaust, one of the most profound experiences students have — we all have — is learning from a survivor,” said Mitch Braff, founder of the Jewish Partisan Educational Foundation. “There’s nothing like it.”

Blum Schneider said personal stories from survivors create an emotional connection to history like no numbers or facts can.

“They talk about the relationship they had with their parents, they talk about what the grass smelled like on the day Nazis invaded their town,” she said.

Susan Victor, the daughter of a survivor and a lecturer in the education department at Sonoma State University, said young people learn best through relationships.

“My mother, and many of the other speakers, can tell you the many times students will come stand next to them after a presentation, just to be close to or even hug them,” said Victor. “They want to take in the story and the teller.”

The reality, though, is that there is a diminishing number of survivors who are able to bring their testimony into classrooms, synagogues and other spaces. Some have become too frail, while others were children during the war and remember little. Most have passed away.

The continuing loss of first-person witnesses is concerning not only to educators. For the professionals who work directly with them as clients, those losses are palpable. Blum Schneider said JFCS provides services to 1,000 survivors in the Bay Area.

Galina Chyorny, coordinator of Holocaust survivor services at Jewish Family Services of Silicon Valley, said the agency helps 200 survivors who are 85 and older. But “we are losing survivors,” she said. “They are very frail.”

“Time is sensitive,” said Hilla Flohr, a social worker at JFS. “If we really want to help those people, now is the time.”

The Los Gatos-based agency assists survivors with their day-to-day needs, such as medical care, home help and transportation. Many of their issues are common among seniors generally, but Flohr said for survivors who have gone through such trauma, there are added triggers that evoke difficult memories. It could be the arrival of the Jewish holidays, certain types of music, or even clothing that recalls memories of the war.

They talk about the relationship they had with their parents, they talk about what the grass smelled like on the day Nazis invaded their town.

Of course, that is not the case with every survivor. Many around the world are still healthy and open to talking about their lives. And Holocaust educators, meanwhile, are looking at ways to keep their stories alive and relevant, whether through oral histories, memoirs, or letters survivors wrote during the war.

The JFCS Holocaust Center includes the Tauber Holocaust Library, with more than 13,000 volumes and 2,000 recorded oral histories, while Los Angeles hosts the USC Shoah Foundation, with its vast trove of oral histories.

The JFCS Holocaust Center is also looking to the future with the Next Generation Speakers Bureau, which is currently training its second cohort of children of survivors in how to tell their parents’ stories, as well as their own. Victor is part of a similar effort as a board member of the Alliance for the Study of the Holocaust and Genocide in Sonoma. Only three survivors are speakers, including Victor’s mother, but the adult children are carrying their messages forward.

“We focus not only on telling their story with as much detail and authenticity as we can, but also convey what it means to hold those stories and share them, despite the emotions they evoke — or perhaps because of them,” she told J.

Braff’s foundation has recorded more than 50 oral histories with partisans who were part of the resistance against the Nazis, and created a curriculum for educators that uses video clips, text and images.

There have even been recent experiments in using virtual reality and holograms at the USC Shoah Foundation, where a survivor’s prerecorded hologram “answers” questions from an audience. Sociologist Diane Wolf, a professor at UC Davis, is not a big fan of such endeavors, which she finds both uncanny and too expensive.

Wolf, who has taught, researched and written extensively about the Holocaust, said the gradual change from lived memory to history is a natural process. It may be hard to see living testimony disappear, but it’s something that must be accepted.

“We’re kind of a linking generation,” she said. “We don’t want to let go of it, but I think it’s inevitable.”

How to get help

Your search for information about help with home care and other services for Holocaust survivors can start here:

Assistance in obtaining reparations for Holocaust survivors is available through AvivShoah, a nonprofit in Israel: avivshoa.co.il. 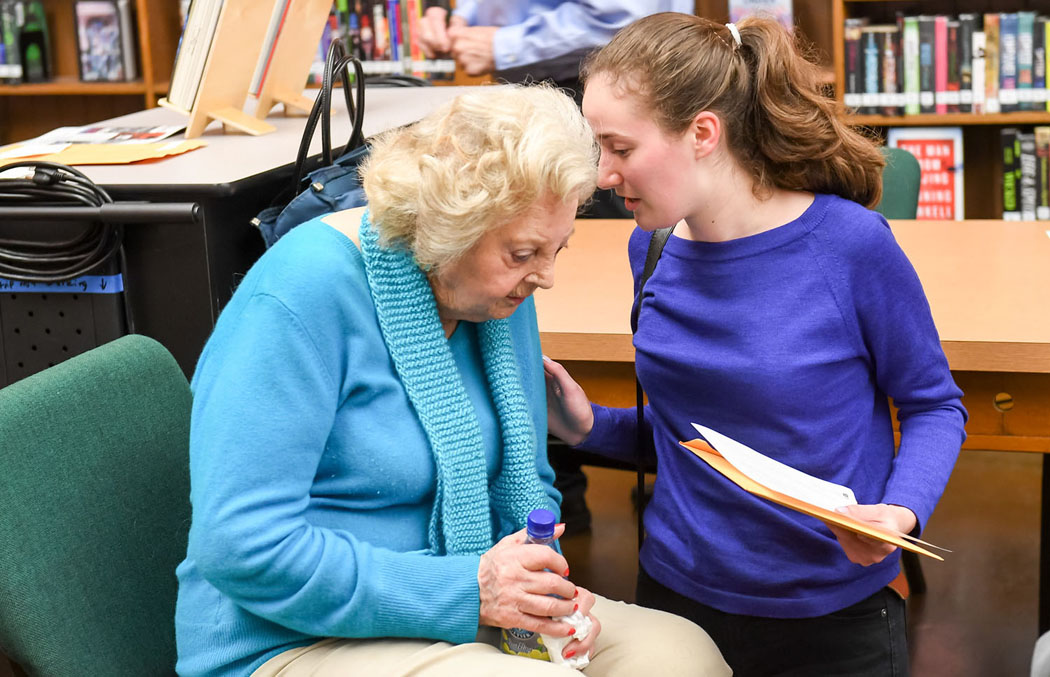