Whenever Berkeley native Aliya Fastman traveled abroad, she always made sure to take a cooking class. She found that making the foods of another country was the best way to learn about the culture.

Now Fastman is the one teaching the cooking classes to travelers, introducing them to the cuisine and culture of Israel, her adoptive home for the past 10 years.

In 2016 she founded her company, Citrus & Salt, to offer the classes in her home in Givatayim, outside Tel Aviv. They are now the No. 2 attraction for classes on TripAdvisor, with most of her reviewers giving a five-star rating.

“My daughter didn’t think she liked falafel until she tasted Aliya’s moist and savory version,” writes one traveler from Chicago. “We charred vegetables, sampled spices, kneaded pita dough and ate our way through a delightful dinner with friendly, interesting fellow travelers under Aliya’s calm and thoughtful tutelage. She is great at inviting you into her home and has the perfect set-up for an authentic experience. Don’t miss out!”

Fastman, 31, is the daughter of Chochmat HaLev founders Avram Davis and Sara Shendelman, who introduced her to interesting foods early on. It wasn’t all that unusual to eat meals cooked in a wok, or for her family to sit on floor cushions eating Afghani food, using their hands rather than utensils while sharing one large plate.

So, with the first name Aliya, was it preordained that she would one day move to Israel? (“Making aliyah” means “ascending” to live in Israel.) “My parents tell me that they didn’t choose the name with the intention of me having a strong connection with Israel, but I think these things can be fate — whether my name guided me to my destiny or my parents were told by their spirit guides,” she joked.

Or it could have been love. Fastman studied at Hebrew University in Jerusalem during college, where she met and befriended a security guard. She came back in 2010 after graduating from UC Santa Cruz, served in the Israel Defense Forces for a year and made aliyah. That’s when she started dating the security guard, now her husband.

While in the army, “I would try to make pseudo-meals in the kitchenette where we weren’t even allowed a panini press,” she said. “I was soaking beans and making things in an effort not to gain the ‘army 15.’”

Cooking was always a hobby of hers. In college, Fastman said, she taught her sorority sisters how to roll sushi. While studying for a master’s degree in conflict resolution at Tel Aviv University, she started offering cooking classes to her friends. Many of her jobs also involved food, including one at the King David Hotel where she was a server.

Now she regularly opens up her home to people from all over the world.

“To welcome a whole group of people from five different countries and make them into friends by the end is at the heart of it,” she said. “It’s not only about how fluffy the pitas are, but that they feel welcome in your home. They’re getting a sneak peek into Israeli life, and a window into what Israel and its food and culture are about.”

Fastman recalled taking a cooking class in Italy where the family had a pet pig and made their own olive oil. The suburb where she lives now isn’t quite so agrarian, but she does have a baby and “people find him quite charming,” she said with a laugh.

Fastman’s younger sister Shaendl Davis also lives in Israel. A graduate of the Jerusalem Culinary Institute, she works as a pastry chef and sometimes helps out with Fastman’s larger classes.

A sample menu might include pita, falafel stuffed with feta, shakshouka, fire-roasted eggplant with tahini, and fatoush salad. Fastman always gives travelers tips about spices like za’atar and sumac, both easy souvenirs to take home. She also teaches Israelis about international cuisines like Japanese and Thai.

“I love empowering people to feel more confident in the kitchen,” she said. “I love seeing the look on people’s faces when they see that making something like fresh cheese really isn’t all that hard.” 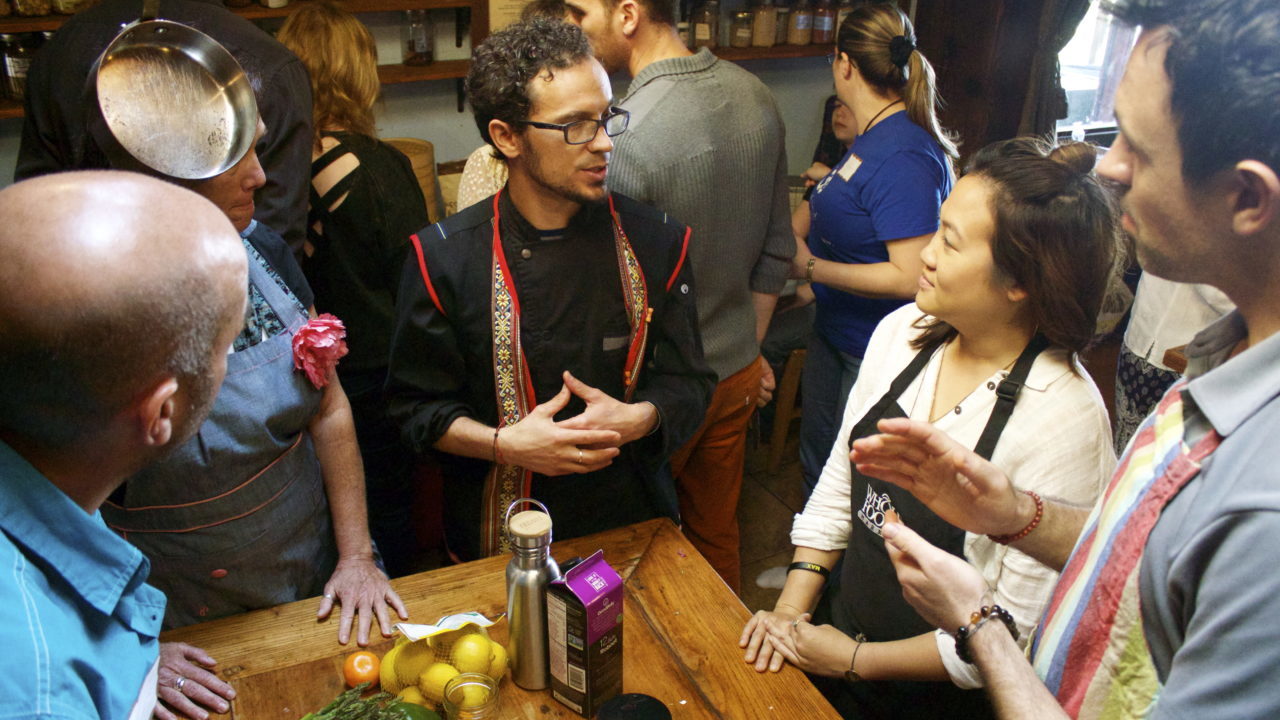