On the evening of Friday the 13th this month, Rabbi Yonatan Cohen of Congregation Beth Israel in Berkeley got a knock on his door.

Standing before him was a member of his staff, who had come to tell him that a parent whose child attended the synagogue’s preschool, Gan Shalom, had tested positive for the coronavirus. Beth Israel is a Modern Orthodox synagogue, and since it was Shabbat, Cohen had to make a decision about whether Sabbath laws could be suspended in accordance with pikuach nefesh — the principle that the preservation of human life overrides almost any religious rule.

Cohen chose to break Shabbat, using electronics to convene an emergency meeting with his staff, who determined that they would notify community members on Shabbat morning.

“If you wait 24 hours, you are also going to erode trust,” Cohen told J. “By communicating swiftly, we’re affirming values that we stand for. The mitzvah at that moment is the sanctity of life.”

In accordance with Alameda County guidelines, Cohen began a two-week quarantine of one of the two learning pods at the preschool, Gan Shalom. The school’s director, Emma Schnur, had the spaces deep-cleaned over two days.

Although others in the affected family tested positive, the rest of the Gan Shalom community received negative test results.

“This was bound to happen,” Cohen said of the positive case. “And there is no blame. It could’ve happened to anyone.”

While most high schools remain closed in the Bay Area, preschools, like elementary schools, may open if the administration demonstrates to public health officials that they have a plan to lower the risk of spread among students and staff.

Even early in the pandemic, as of May 31, there were more than 33,000 child care facilities open across California, according to the California Department of Social Services. Many local synagogues and JCCs are running preschools even while in-person events for adults are on hold.

Children can get Covid-19 but are less likely to develop serious symptoms, according to the Centers for Disease Control and Protection, and have relatively low hospitalization rates. In total, only about 7 percent of reported coronavirus cases in the U.S. were found in children under 18, according to the CDC. And researchers believe children under 5 are less likely to spread the virus than adolescents or adults.

Gan Shalom is not the only Jewish preschool that has dealt with a positive coronavirus test. In interviews with seven Jewish preschools in the Bay Area, J. learned that three had at least one confirmed positive coronavirus case in their communities. Two others said they had close calls, where a community member tested negative after coming into contact with someone who had tested positive.

In Oakland, a child at Temple Beth Abraham’s preschool tested positive for coronavirus in mid-October. However, that child hadn’t been at school for a week, so the possibility of an outbreak was low.

“The exposure was questionable,” said Rachel Fenyves, the director of the Beth Abraham’s Gan Avraham preschool. “But we treated it as an exposure. We quarantined their class for 14 days.”

Like Cohen, Fenyves had the school deep-cleaned for two days and required everyone get tested, including the families of the children who attend the preschool.

Luckily, the virus did not spread beyond the one child and their family.

“If or when we have another case, I feel more prepared to handle it,” Fenyves said. “I learned more about communication. I learned about what the community needs.”

But she also said the situation was “really stressful” for the teachers.

“There was lots of anxiety going around,” she said. “If this happens again, what can I do for the community? For the staff?”

To prevent the spread of the coronavirus, Jewish preschools have adopted tactics similar to those being used by Jewish day schools. Every Jewish preschool is using the “pod” model, in which a dozen or so children are placed with two or more teachers. None of the pods intermingle. Parents drop off their children at the front of the school and aren’t allowed inside. Children’s temperatures are taken and they are escorted to classrooms where the windows are kept open for ventilation.

However, the pandemic is creating hurdles for preschools that day schools aren’t facing.

The most apparent is a precipitous drop in enrollment reported by four of the Jewish preschools, a phenomenon that is being experienced nationwide, according to the National Association for the Education of Young Children.

Right before the pandemic hit, South Peninsula Hebrew Day School had 91 children attending the early childhood program in Sunnyvale, according to head of school Rabbi Perry Tirschwell. That number has dropped by roughly a third, he said.

Fenyves also reported a similar drop in preschool enrollment at Beth Abraham in Oakland, from 62 children pre-pandemic to a current count of 46. And Ruth Levitch, director of the Congregation Netivot Shalom preschool in Berkeley, said enrollment fell from 30 to 22 children. Lael Gray, CEO of the Addison-Penzak JCC in Los Gatos, said enrollment at the JCC’s preschool is down by half, from 160 to 80.

Preschools are also limited by each county’s guidelines on the number of children that can be in a classroom, which puts a strain on the amount of available space.

“With the Covid restrictions, we weren’t going to be able to be at full capacity,” said Gray. Her preschool is located in Santa Clara County, which allows up to 14 children in a pod.

The JCC’s summer camp had a staff member with an asymptomatic case toward the end of the summer. Lael told J. at the time that all of the camp’s children and staff were immediately tested, and all results came back negative.

“That really taught us, there’s tremendous value in staying ahead of it,” she said.

Meanwhile, the preschools at Temple Sinai in Oakland and Congregation Beth El in Berkeley reported that either a child or a family member had been exposed to the virus, but immediate testing came back negative.

Early childhood education directors Ellen Lefkowitz of Temple Sinai and Jodi Gladstone of Beth El said that a sense of trust, transparency and quick communication with the community were deciding factors in mitigating a potential outbreak.

“What is keeping us safe is that we’re all working … in this partnership,” Lefkowitz said. “We’ve made this agreement that we’re in this together.”

She assumes that a positive case is likely at some point.

“I imagine [zero cases] will not last forever,” she said. “We’ve had things happen close enough to us that we feel like it is inevitable.”

Aside from lower enrollment, preschools also are reckoning with the fact that parents aren’t able to connect with one another, connections that are the bedrock of a preschool community.

“That’s been the biggest challenge,” Fenyves said. “There is so much we can’t do. [The parents] aren’t coming on campus, they’re dropping off at the gate. [It’s] making it really challenging to do community building.”

Gray said she’s been witnessing the same. “This is when parents build relationships that last a lifetime,” she said. “That relationship between families is pivotal.”

Rabbi Cohen of Beth Israel said the preschool’s community devised a plan to help minimize the social isolation among its families.

When he had to enforce a quarantine for one of the preschool’s two pods, the community also got together and matched up families within each cohort for daily check-ins and to see if anyone needed help with errands, knowing that the kids in the stay-at-home pod would now be in the care of their parents.

“These are important moments of community,” Cohen said. “Moments of crises offer opportunities for deeper connections.” 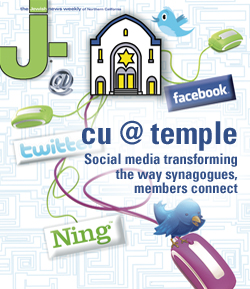 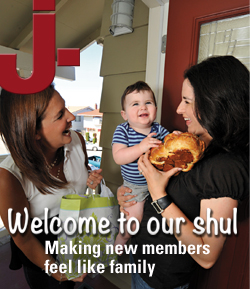