On June 1, I put down my newspaper — filled with articles about wars, Covid, drought and, most horrid, the massacre of school children — and walked two blocks down the street to witness something remarkable. It was the fifth-grade graduation at Redding Elementary School, where I am a volunteer tutor with the Jewish Coalition for Literacy.

Sandwiched between Nob Hill and the Tenderloin, the 100-year-old, three-story brick building is home to more than 200 public school students from the neighborhood and other parts of  San Francisco.

Thirty-seven fifth-graders dressed in a variety of suits, T-shirts, sundresses, hijabs and puffy jackets sat on risers on the blacktop playground and presented a program that gave me hope for America and San Francisco. With the event run almost entirely by the students, their presentations emphasized the diversity and inclusiveness of the school, the immigrant experience and developing a love of learning.

This is a class of students who spent an entire year on Zoom and returned to school wearing masks.

But as one proudly related, “Even with a major interference, such as Covid, we not only survived, but thrived.”

When the presentations began, the two fifth-grade teachers, Ms. Nguyen and Ms. Rees, were in the audience and the students ran the show. They read their speeches in clear, confident voices. So many students participated: Abulez, Emil, Hannah, Tichitra, Alanood, Yahya, Daisy, Ibraheem and Oliver, among others.

A student from Vietnam spoke of how she had believed that once she came to America, she would immediately become a “blond girl with a perfect body” because that’s what she’d seen in movies. At first disappointed that she didn’t fit that stereotype, she soon found that an American girl looks just like her group of friends.

“We come from different countries,” she said. “We speak Spanish, Bengali, Arabic, Thai. An American girl is all of us.”

Another student spoke about her experience learning that “our differences make us who we really are.” Some students were born in the United States, others came as immigrants. They have roots in Yemen, El Salvador, the Philippines, Norway, India, Bangladesh, Greece, Pakistan, Egypt, Mexico, Thailand and Vietnam.

Principal Maurice Gause called them “Redding scholars,” a term the students like to use, as well. Their pride in their education showed through when one boy said, “My reading has improved. Now I’m interested in chapter books. It’s like I’m in a movie theater except I’m reading the movie.”

A student who said his parents came here to experience the American Dream added, “Thanks to my teachers, I’ve gotten the best education I need to live out my own American Dream. Redding represents the America I want to live in.”

At the conclusion of the fifth-grade promotion ceremony, I was the one who felt as if I’d been promoted. The depressing news of the day would still be on my TV and in my newspaper, but here, on one windy but sunny San Francisco morning, I saw a glimmer of hope and I’m clinging to it. 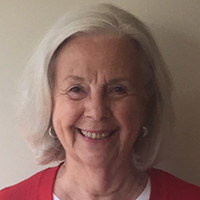 Meta Pasternak is a retired high school English teacher and a volunteer tutor at Redding Elementary School through the Jewish Coalition for Literacy, a nonprofit that trains volunteer tutors to help struggling readers in grades K-5 at 60 schools in the Bay Area.