In San Francisco’s youth, the distinctive contours of Congregation Emanu-El’s towers silhouetted the city’s skyline, easing the return of ships to home port.

For 150 years, Emanu-El has been a towering presence in San Francisco’s Jewish life — and today, with 1,730 households, it is the largest synagogue in the Northern California.

Rabbi Peretz Wolf-Prusan tells restless students that when Jews arrived in San Francisco, they erected Emanu-El as a dramatic symbol of their intention to stay put.

The old Sutter Street synagogue, the synagogue’s home from 1866 to 1926, had twin octagonal towers topped by bronze-plated domes that resembled Torah crowns. Golden spires soared 100 feet into the air, making the synagogue visible from Berkeley.

Now in its third house of worship, a majestic domed building on Lake Street, Emanu-El is home to many of the city’s prominent Jewish families, some of them descendants of the gold rush pioneers.

On the eve of Simchat Torah last Friday, Emanu-El held a special service to kick off its 150th anniversary year. Eight hundred participants shared a massive cake in the shape of the synagogue, dome and all.

That dome, for many, stands out like the head of the city.

“I don’t want it to seem like hubris but the temple is viewed as the center of Jewish life in San Francisco by many in the Jewish and non-Jewish community,” said Rabbi Stephen Pearce, senior spiritual leader and one of four rabbis at Emanu-El.

“Another clergyman once called us ‘the Vatican of the Jewish community,'” he added. “I call it temple heaven, to be in a place with such history.”

Emanu-El began in 1849 as a minyan in a tent. Participants were pioneers who had come to San Francisco with the rest of the 49ers to make it rich.

They were mostly young, homesick Bavarian immigrants. As if by instinct, they set out to form a synagogue, in part to recreate the life they had recently left. Thus, Emanu-El started out Orthodox.

By 1855, however, the congregants’ sentiments shifted to a more liberal Judaism. By 1860, a Reform rabbi, Elkan Cohn, arrived to lead the congregation, and in 1877, Emanu-El was the first congregation in the West to join the Reform movement.

“People began to think more about new life in California, as opposed to their old life in Europe,” said Fred Rosenbaum, executive director of Berkeley’s Lehrhaus Judaica and author of two histories of Emanu-El. His new book, “Visions of Reform,” due to be published in 2000, updates his 1980 “Architects of Reform.”

“Young men very quickly acculturated in San Francisco,” said Rosenbaum. “They were Jewish pioneers thrown together from all over the world. I think they saw many different kinds of people and were impressed with different ways of worship.”

The first rabbi couldn’t weather the Westerners’ wish for a less restrictive Judaism and left after one year. But the synagogue’s second rabbi, Cohn, fitted in nicely. From his arrival in 1860 until his death 29 years later, he steered the community into a Reform powerhouse.

Jewish wealth in the city rose rapidly in the first decades of Emanu-El, and congregants amassed an enormous $200,000 to build the Sutter Street synagogue.

Ray Marks, 83, who has been a member of Emanu-El for more than half its existence, recalls the looming Gothic arches of the old synagogue.

“I was very inspired by it. Even as a child, I remember walking up the front stairs and being impressed,” said Marks, a past president of Emanu-El who now lives in Menlo Park.

Marks would go on to watch his brother celebrate his bar mitzvah there. He also witnessed the laying of the first cornerstone at the Lake Street synagogue in 1926.

“I think the present building is remarkable architecturally,” he said.

“When the writer Gertrude Stein said, ‘There is no there there’ — referring to Oakland — she was saying that she didn’t think [Oakland] was very important,” he added. “Emanu-El’s synagogue — that is my there there. It is constant and there all the time. To me that is very important.”

The congregation with a legendary past has been the house of worship for a number of celebrities, including jeans magnate Levi Strauss; Sen. Dianne Feinstein, a Democrat from San Francisco; and Supreme Court Justice Stephen Breyer, who also grew up in the city.

In addition, child prodigy-violinists Isaac Stern and the late Yehudi Menuhin were discovered by a legendary cantor, Reuben Rinder, at Emanu-El.

But congregants say it’s not the synagogue’s “who’s who” list that keeps them coming back. Marks said he’s been impressed by Emanu-El’s ability to grow but still remain “a wonderful temple family, with great closeness among the people.”

That doesn’t mean it’s always been smooth sailing. Since its foundation, Emanu-El has see-sawed, with tensions between traditionalists and liberals.

“The temple seems to oscillate between two different visions,” Rosenbaum said. “Sometimes, it’s the vision of a rather homogenous group of Bavarian descendants who are among the commercial elite. Then the alternative vision is that the congregation should be much more embracing for all Jews. Today, the vision that is dominant is the inclusive one.”

One way to experience that vision is through Emanu-El’s four rabbis: Pearce, the senior rabbi since 1993, holds a doctorate in counseling psychology and brings managerial skills to the position. Wolf-Prusan, the religious education director, develops youth and family programs. Helen Cohn’s specialty is adult education, including conversion classes and workshops in meditation and mysticism. Sydney Mintz, a former comedian, specializes in community service and social action.

Pearce said having four rabbis helps the congregation provide something for everyone.

Half-joking and half-serious, he said his congregation is like a “synaplex” — designed in the fashion of movie theaters that have a variety of offerings.

“We offer multiple worship opportunities. Instead of one Friday and Saturday service, we have eight to 10 opportunities in the course of a month,” Pearce said. “It’s a matter of individual choice which to attend. This house shall be called a house of prayers for all people.”

Emanu-El also plans to offer a plethora of activities to celebrate its 150th birthday. An exhibit detailing the architectural history of the congregation titled “Emanu-El — Image on the Skyline, Impact on the City” runs through Jan. 2.

Guest speakers and performers during the year will include violinist Stern, author David Halberstam and an interfaith concert with choirs from nine congregations that have been around for 150 years.

“We’re doing something for everybody,” said Katherine Hellman Black, one of three organizers planning the 150th anniversary celebrations. “It’s not just one bash, it’s throughout the whole year. All of San Francisco is invited to come.”

Amid a flurry of activities, the congregation is thriving. But will Emanu-El be able to retain a homey, community feeling as the crowds get larger?

It’s a question that weighs heavy on Emanu-El’s leaders. “The great challenge is to weld the very large membership into a unified community,” said Rosenbaum. “There is a danger of fragmentation. But this is a challenge facing the Reform movement in general.”

The congregation is considering setting up satellite worship sites around the Bay Area to serve the 23 percent of its members who don’t live in the city.

To foster warmth and connection, Terri Forman, the synagogue’s director of development, has one rule: “When someone walks into services for the first time, that person should not leave without being welcomed by someone,” she said.

In the same way, Emanu-El continues to be a gate through which the Jewish community welcomes the rest of the world.

And, at certain moments, the world comes to visit. The Rev. Martin Luther King Jr., for example, dropped by in 1963 and spoke from the pulpit.

After King delivered his words, he turned to Emanu-El’s rabbi, the late Alvin Fine, and said he was awed by the dome and the intricately carved ark — and deeply appreciated being welcomed inside the sanctuary. 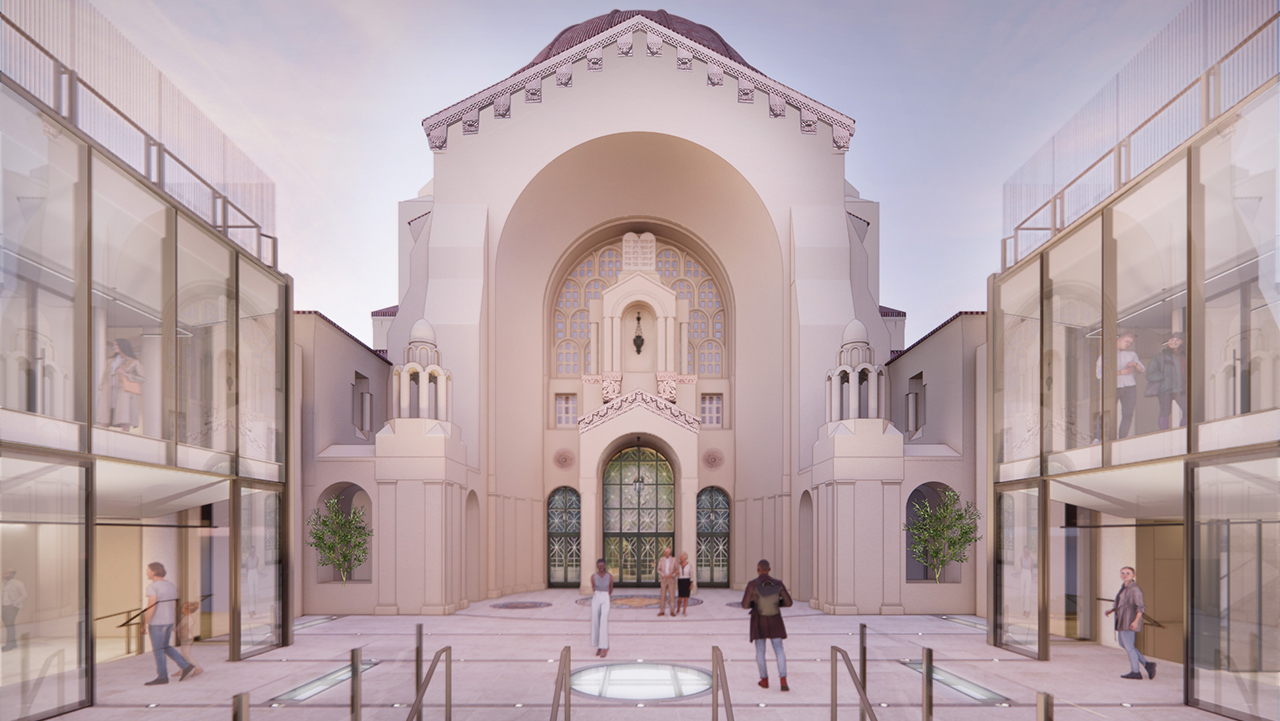