COVER STORY: Jews and the invention of the American comic book

Look up in the sky: It’s a bird. It’s a plane. No, it’s a minyan of comic book superheroes and their geeky Jewish creators.

From its inception, the modern comic book has been a friendly domain for Jews, from Marvel’s Stan Lee to Maus’ Art Spiegelman. Hawkman, the Flash, Thor, Superman and Batman were all created by overactive Jewish imaginations.

But like some dark secret held until the last cryptic panel, the Jewish connection to comics has only recently gotten any serious ink.

San Francisco-based writer Gerard Jones, author of “Men of Tomorrow: Geeks, Gangsters, and the Birth of the Comic Book,” says Jews did it by channeling “adolescent boys’ primal projections,” thus transforming a disreputable enterprise — the lowly comic — into a cornerstone of pop culture.

Most of the Jews who breathed life into the comics have origin stories worthy of a comic superhero: Depression-era teens dodging Yiddish hucksters and predatory gangsters, and displaying some superhuman chutzpah.

Says San Francisco’s Trina Robbins, a Jewish historian of women in the comics: “They either had to fight for themselves or be beaten up by the tough Irish kids. I don’t know if it’s in the genes, I don’t know if it’s the heritage, but there’s a thing about Jews and communication.”

Robbins has written comics on the Warsaw Ghetto uprising and the Triangle Shirtwaist factory fire, and is the author of the GoGirl! superheroine saga.

Jones offers another explanation: “Of the many immigrants coming across the Atlantic, the most literate culture was the Jews. They put the biggest emphasis on finding a job you could use your brains at.”

They came from homes where Yiddish was shouted across the dinner table, along with at least one other language — Russian, German, Polish. That — plus English outside the home and Hebrew lessons to boot — made for multilingual youngsters keen on the Sock! Zoom! Bam! power of language.

But why comic books rather than pre-approved careers like medicine, law or business?

“In 1937, it was probably not even thought of as a profession,” says Steve Leialoha, a Hawaiian Jewish artist based in San Francisco who has worked on many comics, including Spider Man and Doctor Strange. “A lot of them were still teenagers when they started. It was the height of the Depression.”

Art Spiegelman, creator of the Holocaust-themed graphic novel “Maus” and the recent “In the Shadow of No Towers,” says it was an opportunity waiting to be mined.

“Because it was beneath contempt, it was open to Jews. [The comic book industry] was essentially part of the rag trade. Given the chance, Jews would have become painters or written novels, but here was a way for kids with an intellectual bent to express themselves.”

It was also a way for kids to get paid for thinking about saving the universe from alien conquerors and rescuing curvy damsels from evil geniuses.

Not every Jew in the world of comics wanted to imagine men with wings or blue fur. Some just wanted to get filthy rich.

One of the accidental founders of the industry put his own spin on Horatio Alger and went from rags to pornography before settling on fictional crime-fighters (the riches followed later).

Born in Romania at the turn of the last century, Harry Donenfeld found himself scrambling to make sense of the Lower East Side — along with thousands of other young newly minted Jewish Americans.

As Jones says, “Harry was turning himself into a new kind of peddler, one perfectly in keeping with a rapidly changing America about to go on a superheated, advertising-driven economic binge: He was a salesman who sold himself.”

His skill at hucksterism led to the lucrative practice of hawking moonshine for gangsters during Prohibition. Smuggling booze led to a racket in the newspaper business, and then pornography. Whatever he could sell, he sold.

Jones writes in his book that “Harry saw himself as the class of the girlie pulps.” Donenfeld was willing to try anything, including an experiment called Spicy Detective Stories. According to Jones, “the first issue’s cover was adorned by a nearly naked blonde backing away in terror from a brutish rapist while a gun pokes in from a window. It was an instant hit.”

While that adventure in pseudo-porn was financially successful, community outcry caused the enterprise to crash, forcing Donenfeld and his partners to scramble for other means to keep up profits. They found success in reprints of cartoons from the funny pages, which sold even better than the nearly naked blondes.

As Jewish immigrants settled around the country, Cleveland boomed as a Jewish center. The city’s quiet neighborhoods were filled with struggling yet ambitious middle-class families.

Out of that environment emerged Jerry Siegel and Joe Shuster, who began drawing a familiar figure in a blue suit and red cape.

The Man of Steel made a killing for Donenfeld, though the two creators lived in obscurity and financial hardship most of their lives. Siegel and Shuster were locked out of the vast comic book fortunes because of an ill-advised decision to sell off the rights to their creation at an early stage. It wasn’t until they were very old men that Siegel and Shuster received the financial and cultural rewards that go hand-in-hand with creating an American icon.

Robbins points out that Siegel and Shuster “didn’t consciously think, ‘Let’s make Superman Jewish.’ But they did like that ‘Moses story.'”

That’s Moses as in Exodus and Leviticus.

While the theory may not spark the heated controversy of evolution or quantum physics, the “Superman as Moses” hypothesis offers plenty to chew on.

Superman’s name on his home planet of Krypton, Kal-El, bares a strong resemblance to the Hebrew transliteration meaning “all that God is.”

Then, just before Superman’s home planet blew up, his parents placed the infant Kal-El in a spaceship that sped towards an unknown destiny.

Jones further draws the parallel, noting that Moses, too, is “sent down the river as a baby and raised by the others. But then his real self manifests later.”

Best-selling author Michael Chabon of Berkeley covered some of that territory in his novel “The Amazing Adventures of Kavalier and Clay,” in which one character says to the other, “Superman, you don’t think he’s Jewish? Coming over from the old country, changing his name like that. Clark Kent, only a Jew would pick a name like that for himself.”

Superman isn’t the only closeted Jewish superhero. Poke a shade below the bright surfaces, and other lesser-known comic creations also appear to be colored by Judaism and Jewish culture.

One of the most explicit is found in the ongoing saga of mutants in the Marvel Comics universe. A malevolent mutant named Magneto, associated with the ubiquitous X-Men, is a Holocaust survivor who helped found the nation of Genosha — intended to be a haven for mutants that have been persecuted all over the world.

Magneto originally meets the founder of the X-Men, Charles Xavier, in Israel.

Writers continue to mine the Jewish roots of Magneto and his mutant cohorts in recent issues. A spin-off from the X-Men called Excalibur chronicles how Charles Xavier collaborated with Magneto to help rebuild the war-ravaged Genosha.

And the September issue of the mini-series “Wolverine” takes place in the Sobibor concentration camp. Dedicated to the late comic book originator Will Eisner, the story by Mark Millar places the nearly invulnerable X-Men member as a kind of ghostly camp victim who won’t die. He ultimately drives the camp commander mad.

Recently, Benjamin Grimm — the orange, rock-covered member of the Fantastic Four — returned to his roots as a Jew from the Lower East Side. Robbins speculates that Grimm, aka “the Thing,” was the alter ego of creator Jack Kirby.

“The Thing was Jack,” she suggests.

In the Green Lantern comic books, the beings known as “the Guardians of the Universe” were reportedly based on the physical appearance of Israeli Prime Minister David Ben-Gurion — though the Guardians never retired to a kibbutz.

The concept of secret identity is as much a part of the superhero formula as super powers. Wonder Woman, the Martian Manhunter and Thor have secret identities that are either average or less-than-average Joes. In Thor’s case, the god of thunder dwelled among mortal men under the guise of a doctor with a lame leg.

And who are Thor’s creators? Jack Hertzberg and Stan Lieber.

Lieber is the guy who changed his name to Stan Lee and went on to found Marvel Comics. Why go from Lieber to Lee? Like countless other Jewish professionals, Lee wanted to give himself a more “mainstream”-sounding name.

A secret identity of his own?

“It’s about passing,” Robbins suggests. “All the heroes then had secret identities. And the writers had to pass as gentiles. Bruce Wayne isn’t Jewish even if Bob Kane was.”

As Jones sees it, Jewish immigrants felt “superior, but had to put on this garb and behavior that was less threatening to the goy. You were going through this centuries-long test, for whatever reason, that could have broken down your sense of self-esteem, but you also had to remember that you had a special destiny.”

Says Robbins: “Let’s face it: Jews, including me, tend to think they’re a little superior. But they don’t like to say it too much to non-Jews because that’s why they get persecuted. So here’s all these heroes and they really are superior. They all have fabulous powers but they have to keep them hidden, because if people find out they’ll persecute them.”

So maybe it was lonely to be a creative Jewish teenager back then, but it turned out to be a lot less lonely when a Siegel or Shuster or Lieber escaped into their imaginations and later found acceptance by the American masses.

“Krypton was gone,” reflects Jones, “and so was the Old Country. Not just that you’ve left it behind, but your home world is gone. The deeper analogy is that the Holy Land is gone.”

The Hebrews may have lost their Temple in Jerusalem, but the Jewish kids of comic book creation built a new temple within pop culture. Today their heroes are more visible than ever. Batman returned to the movies last summer (with huge box office), and Superman is slated to return next summer.

So when you buy a ticket to watch those Jewish-spawned icons fight the good fight on the silver screen, it’s worth remembering: These heroes wouldn’t be there if a few pimply faced kids in the 1930s hadn’t been daydreaming in synagogue and struggling to make sense of the Lower East Side. 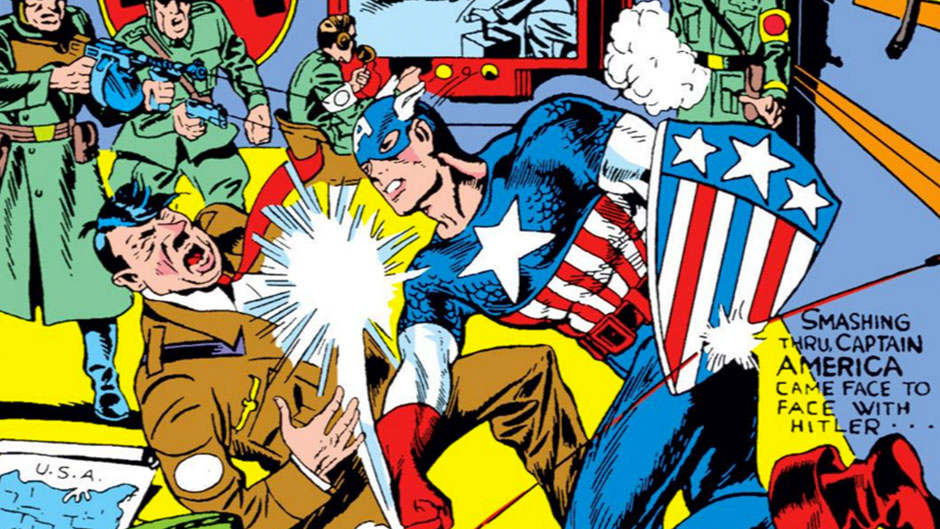