Has this single mom found her bliss with an Israeli motorcyclist?

Here, you have it: I’ve fallen hard for the Israeli. Do you remember the j. reader who contacted me recently, through this column, to tell me about her husband’s best friend, “an amazing Jewish man who adores kids”?

Ever since our first date some months ago, I haven’t wanted to see anyone else. He’s a Man with a capital M. He rides a motorcycle. He plays pool. He tells dirty jokes to his guy friends. He’s a man, man, man — not a boy, thank goodness!

Yes, he’s very opinionated about politics (aren’t all Israelis?). “It’s not about oil or weapons,” he tells me. “It’s all about Iran. Keep your eyes on the news. You’ll see.”

He’s a great storyteller; he enlightens me about his boyhood adventures on the kibbutz up north, where he grew up untamed and free.

And guess what? He seems like a nice guy, in that sturdy way Israelis can be.

After the first few dates, I discover that he’s Jewish to the core — well, in an Israeli kind of way. He loves to eat. He’s a genuine shmoozer. He goes out of his way to help friends. This weekend, in fact, he’s moving his best friends and their new baby into a new house. Talk about chipping in, as Jews are commanded to do.

When I told him on our first date that I was writing a book, he asked: “What’s it about?”

He stopped walking. “Are you saying that I’m prey?”

I laughed. When other men discovered what my book was about, they got tense and anxious. One man asked if I was tape-recording our date. Another man begged me not to use his name in print.

But 45-year-old Yossi is light and easy. Over coffee on our first date, we talked about sailboats, the stalemate in the Middle East and single motherhood. He told me that he wants to sail around the world one day.

I’ll be your stowaway, I thought.

When Yossi rings our doorbell for the second time that I’ve invited him over for dinner, my 6-year-old daughter is the first to fly down the stairs and right into his arms. This melts me.

“She thinks you’re her boyfriend, too,” I tell him. I’m buzzing around the kitchen, making rice, a veggie stir-fry and a colorful salad.

I walk over to him and rub his shoulder. I whisper into his ear, “You know, it’s OK to get up and help me.”

He laughs — and he does get up. He cuts the bread into little slices and pours my daughter a glass of milk.

That night, Yossi shows my kid how to kill a moth on our ceiling with a slingshot he makes out of a little piece of paper and a rubber band.

Ah, this is why I need a man here.

He doesn’t seem intimidated by my feisty daughter — or her strong-willed, independent single mom.

He also seems quite adaptable — dare I say that’s he’s easily bendable? — and I can’t help but wonder if it’s the Israeli in him. Almost two decades ago, he landed in the Bay Area with the clothes on his back and created a new home and business. He came to Berkeley because one of his kibbutznik friends offered him a place to crash, and his circle of friends quickly grew. But then again, isn’t it the adaptability of Jews that has made them able to move on and resettle?

One of his guy friends asked me recently: “Don’t you think that Yossi is like the Israeli version of Kramer on Seinfeld?”

It’s true: He’s just as goofy and sincere as Kramer — but sexier and more huggable.

Someone pinch me, please. 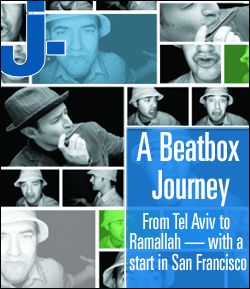