Kong Bam Pung: I’m just not crakked up to win at mah jongg

I sat with the novices scratching my head as Nancy Laber held up the tiles. I tried to figure out the difference between a pung and a kong, a crak and a dragon, a dot and a bam. And what exactly is a Charleston?

I was a mah jongg virgin, and along with others from Beth Am Women in Los Altos Hills, I sat at the beginners’ table in the social hall because I’m sociable, and curious. I wanted to know what this game of tiles is, and what the attraction is for so many Jewish women.

I have only touched a mah jongg set once, when I was a little girl. Linda, who lived on the fourth floor, opened her mother’s set one day and tried to explain the game. I didn’t understand it then. I don’t understand it now.

My mother didn’t play mah jongg either. Tuesday was canasta night with “the girls.” They snacked, talked and put coins into a kitty, using the money to go to Broadway shows. Later Mom switched to bridge. But while both my parents were serious card players, they didn’t pass the gene on to me.

One person who did play mah jongg was my husband’s mother, Grandma Pearl, who died in 1999 at 93. While going through the attic, I found a heavy red alligator-print case that held her treasured set, at least 50 years old. I dusted off the box and opened it. On the inside cover was a yellowed label: “Royal Depth Control, Genuine Catalin, Hand Painted, Made in U.S.A., A & L Mfg. Co., Inc. N.Y.”

Royal Depth Control has to do with the incision process. Catalin is plastic with panache, a phenol-formaldehyde resin similar to Bakelite. Phenol and formaldehyde are not my favorite materials, but the set was stunning, with hand-painted pictures of dragons, birds, flowers and unfathomable characters in red, green, black and blue, and green, red and yellow racks.

But why was a cut bar of Cashmere Bouquet soap tucked in amid the yellowish tiles? And why were a few tiles painted red?

Perhaps the soap was there for the scent. And because “every set is just a little different,” Laber said, “your mother-in-law painted [some of the jokers] with her nail polish,” to avoid confusion.

We six novices sat at the beginners’ table thoroughly confused as we opened Grandma Pearl’s game and Laber set it up. We admired the set, tried to distinguish one tile from another, looked at the official card of rules from the National Mah Jongg League, and became even more baffled. Were these rules composed by the folks who write the directions for assembling a kids’ swing set?

“At no time may a tile be called to complete a pair including flower for anything but Mah Jongg in an Exposed or Concealed Hand.”

“Player is permitted to discard a Flower at any time during the game and call it ‘Flower.'”

Laber talked about the history of the game, brought from Shanghai to the United States where it became a fad in the 1920s and ’30s. There’s Chinese mah jongg, the game of “The Joy Luck Club,” which is more like rummy, and there’s American mah jongg (aka Jewish mah jongg), which has a menu of winning hands printed on an official rules card, which changes each year.

Meanwhile, we novices were doing more gabbing than playing. “I need a little crak,” said one woman, asking not to be quoted by name.

Maybe this prevents Alzheimer’s, said another.

After a couple of hours, we learned to pass and pick tiles, to distinguish our dots from our bams. We noshed, shared stories about our kids, our grandkids, our lives. With a short break, the game lasted 2 1/2 hours, perhaps long enough to get into the Guinness Book.

Putting away their set at the next table, the accomplished players looked our way as we called it a day.

“How many games did you play?” they asked.

They laughed in disbelief. 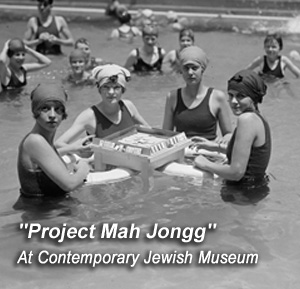