Why I write Jewish and speak Yiddish to my cat

One day last year I was speaking to my cat in the front yard. A neighbor walking by stopped because he was surprised I wasn’t speaking English.

“What language are you speaking to your cat?” he asked.

“About as well as she knows any other language.”

My neighbor had set me up unwittingly. He isn’t Jewish. He didn’t grow up speaking Yiddish. How was he supposed to know I was going to turn his innocent question into a joke? But my father, if he were still around and had been on my porch at the time, would have seen what was coming a mile away. My wife, who grew up around Yiddish speakers, would have seen it too, had she been there.

When I was a kid, there was something that Jewish men of my dad’s age who had been born in America would sometimes say: “Dress British. Think Yiddish.” Neither my father nor I dressed British when I was growing up. But my father, born in Poland, definitely thought Yiddish. So did my mother, also born in Poland. Being around those two, how could I not think Yiddish as well?

We spoke Yiddish in our Milwaukee home. I learned English when I was little by watching shows like “Leave It to Beaver.” I think Yiddish to this day. But because I haven’t used it regularly in decades, my Yiddish is rusty. To keep it from disappearing, I speak it to my cat. Don’t think I’m not waiting for the next unsuspecting neighbor to innocently ask what language I’m speaking to her. Jokes, bad and good, are an intrinsic part of Yiddish culture. So is repetition of jokes, both bad and good.

In America, Yiddish has been distorted into some cutesy thing that’s all about jokes, colorful curses and sentiment. But in my childhood home, it wasn’t a cute language. It was the language of commerce, heated arguments and sophisticated thought. It was also a language for discussing religion, and although I never thought of my family as particularly religious, we kept a kosher home and had a Sabbath meal every week. Three or four days a week, I’d also be ushered off to read the Hebrew Bible and Rashi with men in black hats, and attend evening prayers with those black hats, bobbing my head as I prayed.

Write about what you know, they say. Nowadays, I don’t go to synagogue more than 10 times a year, but given my background, what are the odds that I’m going to write about Anglicans? Or Catholics? Or atheists? Or secular humanists? About the same odds as my cat actually understanding Yiddish.

Write about what’s in your heart, they say, too. My heart, mein hartz, is Jewish. My first language was Yiddish. I look at my face in the mirror in the morning and I know that I don’t look anything like Sylvester Stallone or Alec Baldwin. Who have people confused me with on the street more times that I can remember? Albert Brooks, whose real name is Albert Einstein. (Yes, Brooks’ father was a Jewish comedian.) I know who I am, I’m happy to be who I am, and I know what I am: a Jewish writer.

Stuart Rojstaczer of Palo Alto is the author of “The Mathematician’s Shiva: A Novel” (384 pages, Penguin Books, $16). He wrote this piece for the Jewish Book Council. He will appear at 7 p.m. Thursday, Oct. 23 at the Jewish Community Library, 1835 Ellis St., S.F. www.jewishlearningworks.org

Sharing my success with Mameh


Scene: The kitchen of Mrs. Rachel Rojstaczer, the author’s mother. She has a thick manuscript in a three-ring binder open on the kitchen table. She’s drinking tea out of a glass and reading when her son, Stuart, walks in with a toolbox.

Stuart: Hi Mom. I just came by to fix the kitchen sink. It won’t take much time. You reading my novel?

Stuart sits down to hear the news. He’s given his mother the manuscript so that she can kvell, not so that he can hear criticism, but he knows that criticism comes with the territory.

Rachel: This novel, “The Mathematician’s Shiva.” I have a problem with this book. With the main character, in fact. A big problem.

Stuart: And what is it?

Rachel: The character, Rachela Karnokovitch. It’s me. It’s a copy of me. A carbon copy. And you’ve killed her off. Dead from cancer. Do I look dead to you?

Stuart: It’s not you, Mom. The character is 100 percent made up. Honest.

Rachel: Oh really. It isn’t me. Tun nicht zan a ligner, Shtulelah. Ich bin don mameh, nicht a lalka un a kop. (Don’t think you can lie to me, Stuart. I’m your mother, not a bimbo.)

Rachel: The cameraman can put in subtitles. Mr. Cameraman, you know how to do subtitles?

Cameraman (not visible): Of course, Mrs. Rojstaczer. We can do whatever you want.

Rachel (to Stuart): See. I knew it. Now, vie ben ich giveyn. Oh yeah, the character is not me? What’s her name?

Rachel: Right. Same as me. Where she was born?

Rachel: Right. Your father’s town. And where was this Roochela during the war?

Stuart: In Vorkuta, near the Barents Sea.

Rachel: Right. In a Russian work camp, like me. Not in Kolyma, like me, but farther north. Why did you put me there anyway?

Stuart: I needed it to be near the ocean.

Rachel: OK, so you make me born in your father’s hometown. You tell everyone my exact age. You put me in Vorkuta during the war. You make me into a genius mathematician who studies in Moscow, defects, teaches in the United States, solves Dilbert’s problems …

Rachel: Like anyone will know the difference, and don’t interrupt me. I solve this hundred-year-old problem, Dilbert, Hilbert …

Stuart: That’s the rumor, Mameh, that you solved it. Hold on, I didn’t mean to say you. It’s not you. She’s made up.

Rachel: I said don’t interrupt me. It’s rude. I am rumored to have solved a hundred-year-old problem, but I won’t reveal it to anyone. And then you kill me off? Your own mother, you give cancer and you kill off in a novel? Who is going to buy such a book? Who is going to publish it?

Stuart: It’s already been sold, Mameh. I was going to tell you today. Surprise you after I was done with the kitchen sink. Penguin Books bought it last week. I was waiting to get the letter to show it to you.

Rachel: Interesting. What’s this about the money in the letter?

Stuart: They pay you an advance before they publish the book. I’m going to use it to remodel the bathroom.

Rachel: You should have done it years ago. The pipes rattle. Is there going to be a movie?

Stuart: A movie of the book?

Rachel: Yeah, I’m thinking about it. You write a novel. A good novel. There’s going to be a movie version. You sign the contract yet?

Stuart: Not yet. You know how lawyers are. It takes weeks.

Rachel: Good, because I’m thinking. Who’s going to play me in the movie version? I know. Meryl Streep. You put it in the contract. If they make a movie, Rachela must be played by Meryl Streep. The lady can act. And classy, too. Now she could do me justice. — stuart rojstaczer

This piece was provided by the Jewish Book Council. The entire “conversation” can be found at www.tinyurl.com/nkcyeos. 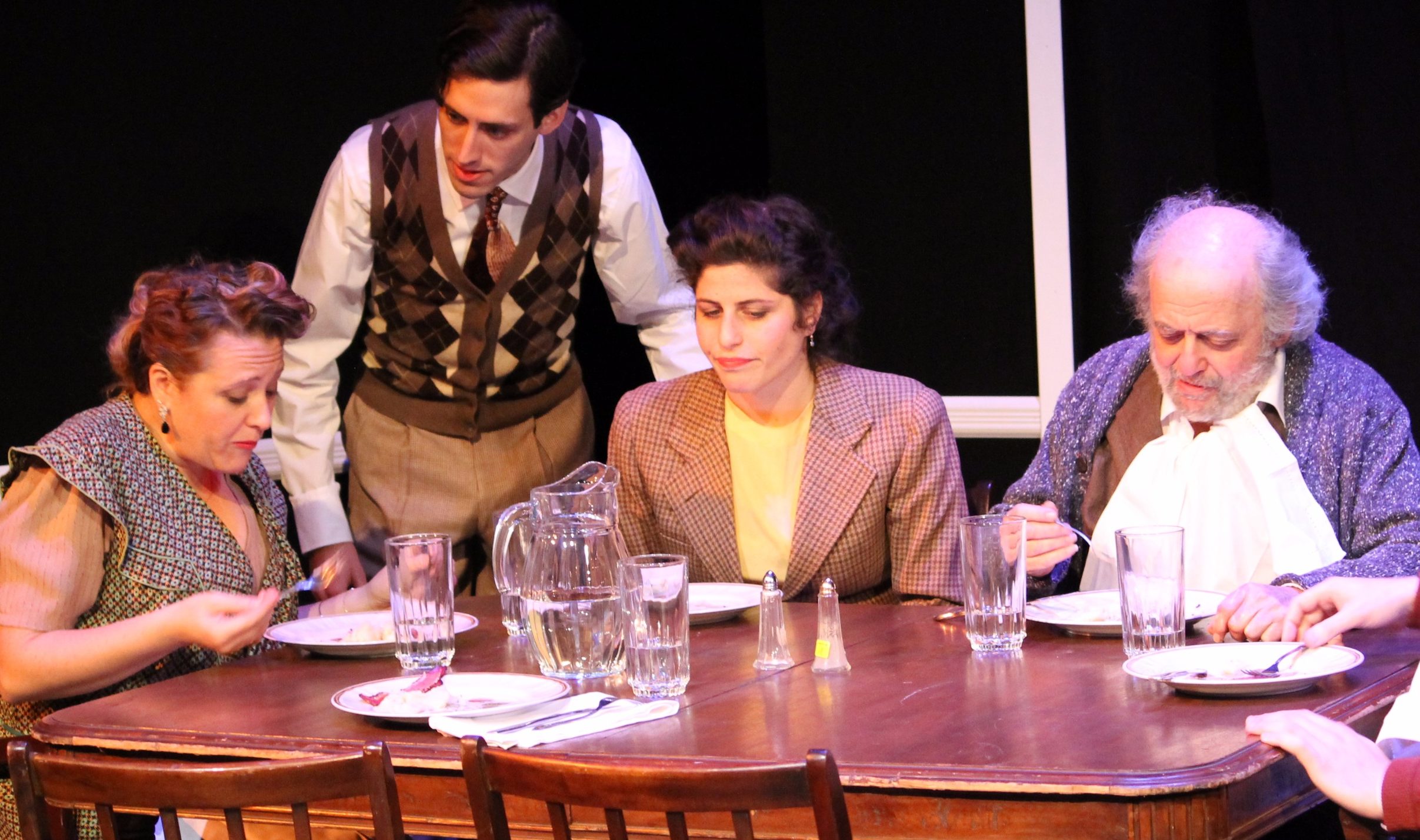