Her home-cooked Yemenite Jewish food is an homage to family, and now a business

For Israelis living abroad, one bite of the traditional flaky Yemenite Jewish pancake called malawach can transport them back home, where it is immensely popular.

But outside of Israel, malawach and other Yemenite Jewish breads are not as well-known. And in the Bay Area, they are much harder to come by.

“There’s nothing here that’s Yemenite,” said Doreet Jehassi, owner of the Ma’lawah Bar, a new business she’s running out of her Santa Clara home. “I have no competition, and it’s an unsaturated market, so I thought, let’s go for it.”

After she left her job as a communications manager at a technology company last year, Jehassi knew she wanted to be an entrepreneur of some sort, but didn’t know what kind. She was on a trip with her siblings when her older sister said, “You’ve always been good at cooking and you love it.”

“It’s true,” said Jehassi, whose Yemenite Jewish parents were born in Israel, remembering all of the time she would spend in the kitchen with her mother. “At work, I was always fantasizing about food and what I’d make for dinner.” When her sister suggested that she give it a try, Jehassi knew she was right.

She was able to open the Ma’lawah Bar under the Homemade Food Operations Act, signed into law by former Gov. Jerry Brown last September, that allows entrepreneurs like Jehassi to operate businesses out of their home kitchens as long as they fulfill several requirements, for instance making all of the deliveries personally rather than farming them out to an app.

Many people have trouble guessing where she’s from. And Israelis who can identify her Yemenite origins are often mystified by her fluent but not-quite-native Hebrew, which isn’t nearly as guttural as the Arabic-inflected Hebrew spoken by other Yemenite Jews.

Jehassi grew up on Long Island, where her parents came after the Six-Day War. At 18, she made aliyah and spent a lot of time in the kitchens of her Yemenite relatives, who taught her how to make malawach (a flaky pancake), jachnun (dough that is rolled into a log with clarified butter brushed between layers and baked for 10 to 12 hours overnight), lachuch (a spongy, yeasted flatbread similar to Ethiopian injera but without the sour taste) and kubaneh (a round, pull-apart yeasted bread baked in a special tin). All except the lachuch are usually served with a raw tomato paste and schug, a spicy green Yemenite herb paste.

She is still tweaking her offerings, but she also sells a Yemenite beef soup; hilbe, a fenugreek paste; and basbousa, an Arabic semolina cake topped with fresh coconut. For now Jehassi is delivering only on the Peninsula, or customers can pick up their orders. She also does some catering.

One happy outcome of her business is that she is building community, getting to know her customers and connecting with people in way she never did in her former career.

“I didn’t realize I’d get such a warm welcome from people,” said Jehassi, who came to the Bay Area with her husband over a decade ago and has three young children. “When I was working in tech, I never had the opportunity to branch out and meet the parents of my kids’ friends. Now that I’m home and doing this, I can meet people and experience the emotional connection they feel when they receive this food, as it brings them back to their homeland. It’s so satisfying.”

With Yemenite food, you don’t just eat this by yourself, you eat it with a crowd of people.

Jehassi has conducted her own market research, sometimes simply by handing out samples to people walking by the house. In the melting pot of San Jose, she has received many interesting comments, especially from people tasting these foods for the first time.

“Jachnun is odd-looking,” she said. “Its taste is unexpected.” She often gets frequent recommendations on changes she might consider, like stuffing it with some kind of filling.

While Jehassi does experiment on her products, such as making them gluten-free or adding a Middle Eastern spice like za’atar, she’s not so keen on Americanizing recipes that go back generations.

“This food is bringing me back to my childhood,” she said. “Food is about being with family and friends and having that togetherness. Especially with Yemenite food, you don’t just eat this by yourself, you eat it with a crowd of people.”

Jehassi often wakes up at 4 a.m. to start the dough, but she isn’t complaining. Far from it.

“I’m reminiscing about doing what my ancestors used to do,” she said. “What a privilege to continue this legacy. More than making money, it’s an honor to be keeping these traditions alive.” 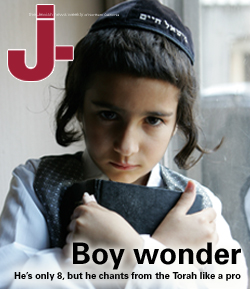