The pastrami was plentiful and the wine was flowing on Aug. 7 at the CIA at Copia in Napa, where Congregation Beth Shalom Napa Valley — aka the Synagogue of the Vintners — put on a new iteration of its L’Chaim fundraiser, presenting the first-ever Jewish Food & Wine Festival.

The event drew around 500 people to enjoy the food and drink along with live music, demos and more. Previous iterations of L’Chaim had featured wine tasting and a sit-down dinner.

“This is really special and unique,” said Efi Lubliner, who came from Lafayette. “I haven’t seen anything like it since Israel in the Gardens,” naming the festival celebrating Israel’s independence that used to take place in Yerba Buena Gardens.

Lubliner, a film buff who founded Orinda’s International Film Showcase and helps program the East Bay International Jewish Film Festival, came back later to report that his mind was blown by a sauerkraut workshop led by Samantha Paone, chef and owner of Golden State Pickle Works. While Lubliner says he is an old hand at making his own, he never would have thought of including some of the ingredients Paone used. “She put fennel in sauerkraut. Fennel!”

That the festival took place on Tisha B’Av, a fast day as well as a day of mourning, was commented upon by others who might have been interested in the event but did not attend because of it.

“The scheduling conflict with Tisha B’Av was unintended and unfortunate,” said Rabbi Niles Goldstein, Beth Shalom’s rabbi. “But by the time we discovered the scheduling error, most of the vendors had been arranged and a great deal of money had already been committed. Still, on the heels of our studying the Book of Lamentations in the morning and experiencing the grief of Tisha B’Av, there was something powerful about celebrating Jewish life and culture toward the end of the same day. Jewish life has always been about peaks and valleys, and it was interesting to observe both so close together this year. There is a lot to be grateful for.”

Numerous attendees and vendors expressed gratitude in different forms, foremost the ability to be able to gather again after the last two years.

“It’s so great to see so many people eating and drinking together again,” said Schecky Miluso, who runs his family’s business, Napa Nuts, with his sister Bonnie Miluso. They had a table in Copia’s atrium with 16 wineries with Jewish connections. A few breweries were stationed outside.

“It’s nice to see so many fressers in one place,” agreed Michael Dellar of Mark ’n Mike’s, a Jewish deli concept from San Francisco’s One Market Restaurant, which Dellar owns.  (“Fresser” is Yiddish for “big eater.”) Even with the temperature in the low 80s, the crowd had a big appetite for latkes, topped with either pastrami; applesauce and sour cream; or brisket with barbecue sauce.

Mark ’n Mike’s was far from the only vendor who closed up early before the event was over; food everywhere sold out.

Two recent cookbook authors did demos that were nicely attended. Beth Lee, author of “The Essential Jewish Baking Book,” said she was happy to see so many parents and children at her challah braiding demo, while J. recipe columnist Faith Kramer, author of “52 Shabbats,” said many J. readers stopped by to meet her at her table. Kramer led a workshop on spice mixes and offered tastes of za’atar, bebere (an Ethiopian spice blend Kramer loves) and hawaij (a Yemenite spice blend), with hummus. New J. recipe contributor and plant-based chef Micah Siva was there as well, selling a new Jewish counting book she and her husband have authored, “1,2,3, Nosh with Me.” All three authors were happy to report they sold books. (J. was a media sponsor of the event).

Food and wine were definitely the main draws, but the Jewish music played by local favorites Veretski Pass and others, and the folk dancing led by Bruce Bierman, also added to the festive vibe.

“We couldn’t have asked for a better event,” said chair Ellyn Elson, who was pleased that the move from the synagogue to Copia seemed to draw more people, and the weather did its part to cooperate. “To get 500 people at something like this is pretty incredible for a Sunday in August,” she said. “We don’t even have a date for next year yet, but all the vendors want to come back.” 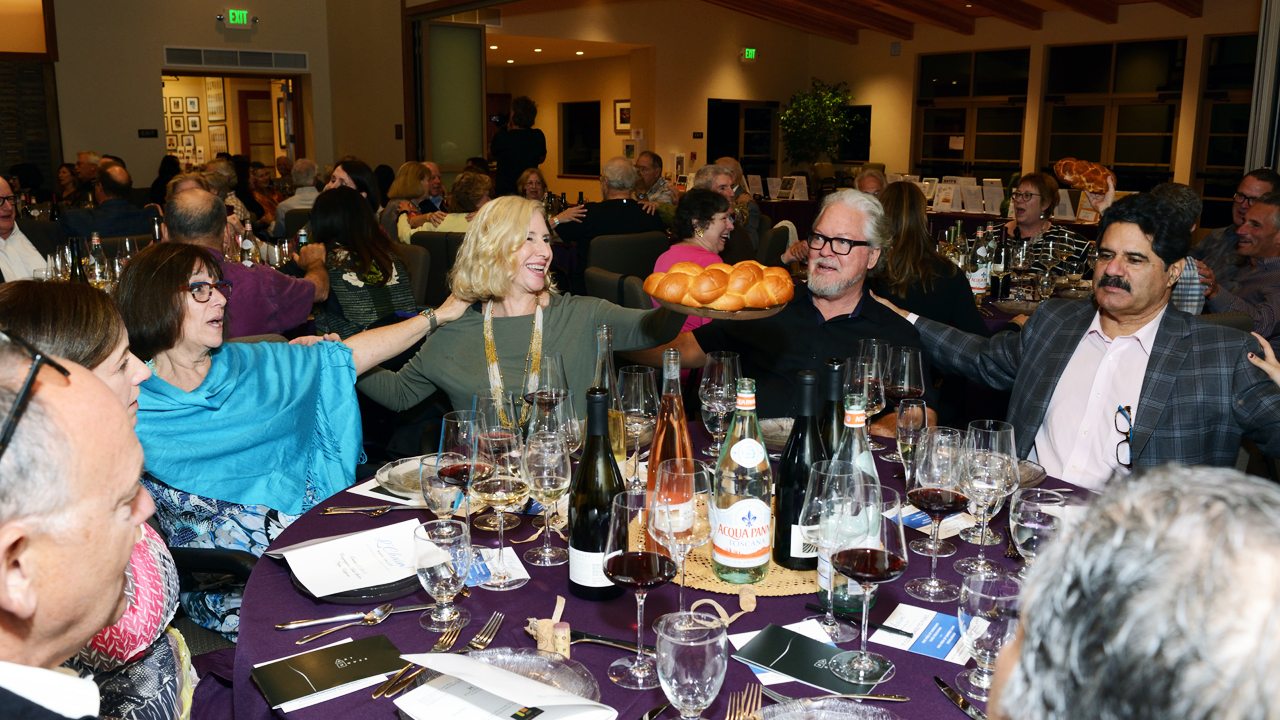